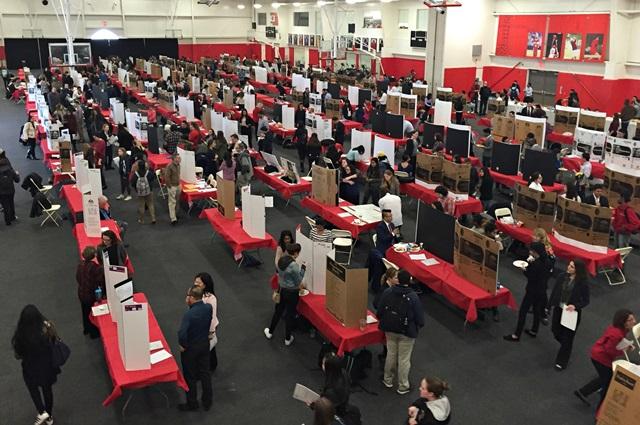 St. John’s students were given the opportunity to share their research and studies at the D’Angelo Center and Taffner Field House on Thursday, April 7. Over 450 students presented, according to the registration desk.

Research from various disciplines and majors were showcased in the form of oral presentations and posters, some of which could be groundbreaking within their respective fields.

Approximately 200 posters filled Taffner Field House, each accompanied by at least one student eloquently explaining a significant study. One of these posters belonged to a couple of Psychology majors, Emily Carpio and Kattrina Fredrique, who conducted a study on the effects of smoking as a correlation between discrimination and obesity.

“The more you smoke the more prone you are to lung cancer and all these things,” Frederique explained, “So if we can figure out how to decrease discrimination, to decrease cardiovascular disease, we can definitely help a lot of people. It will open the door for better health.”

Other studies were just as altruistic but dealt with more pressing matters.

Gamaelle Tellus and Sedelia Dominguez presented their ongoing study on the Leishmania parasite that causes Leishmaniasis, a disease that mainly occurs in the tropics and subtropics. The two biology majors have been researching for about a year. Should their study produce results, the world will be one step closer to developing a Leshamiasis vaccination.

“This disease is very common in undeveloped countries, so it’s very essential, for those people who don’t have the necessary healthcare, essentials that we have here, for us to find a cure [for them],” insisted Dominguez, who believes the potential of her study could be groundbreaking.

Although many studies sought to develop cures and highlight relevant issues, others evoked thoughts about underlying meanings of a variety of art forms through an in depth exploration of them.

Ayobami Oritsejafor’s poster caught attention with its black background brightly accented by yellow, green and red, representing his exploration of Pan-Africanism through the arts. Oritsejafor is an Anthropology major who wanted to examine the platform in which popular figures, such as Bob Marley, spread ideals of black unity.

“Art is really important, especially in recent times. You look at people like J.Cole and Kendrick Lamar, and they’re very influential.” Oritsejafor affirmed, “People listen to them, and people listen to their music. So, for them to put Black Nationalism or Pan-Africanism into their music, it’s getting into people’s minds, and people are starting to be proud that they’re black again.”

Also examining concepts within the arts were three students, Naomi Cho, Marilyn Alexander and Michael Benjamin, who each gave a 15-minute oral presentation in DAC.

Alexander, a sophomore, was the first to present.

She held the audience’s attention with an analysis of the life and works of graffiti artist Lady Pink and the activism in her art.

“It started off as an assignment, and I decided to work on this artist who was kind of less well known,” the history major recalled.

Alexander added, “I really love activist work and a lot of her work focuses on feminist issues, civil liberties, police brutality, things like that. I thought it would be important to show that through artwork you can make social difference.”

Benjamin is a senior English major with a minor in Business Administration and Government and Politics.

His presentation analyzed the significance of there being a level of authenticity in the lyrics of rap and hip hop.

Benjamin noted that his presentation was a way of showing what is possible with an English major.

“I just wanted to shed light on the idea that people in the humanities and arts do productive work, and really cool, interesting things that can be seen as scholarly too.”

Fine Arts major Cho’s presentation was titled: “What It Means to be Asian and Other Works.”

Through her presentation of numerous visual artworks that questioned language and identity, Cho made the audience question how they define themselves.

When speaking about being a Fine Arts major, Cho said, “Sometimes people don’t even know we exist.”

Three out of the four presenters agreed that 15 minutes was not enough time to present their research. However, Cho acknowledgment that, “To be able to share with other people what I’ve been doing was very relieving.”