The Panama Papers: Why are they important? 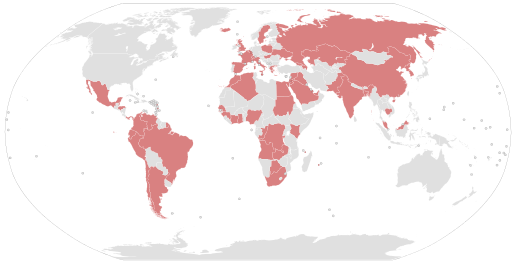 These are the countries that were directly affected by the Panama Papers.

Recently, there has been a lot of information circling around about the Panama Papers. The Panama Papers were leaked from Mossack Fonseca, one of the biggest law firms in the world, with over 11 million documents.

According to the International Consortium of Investigative Journalists (ICIJ), Mossack Fonseca is a law firm that establishes shell companies and offshore entities in order to avoid taxes and launder money.

Many powerful investors, politicians, wealthy families and celebrities are linked to the obscure firm.

The law firm states that they provide “asset protection, tax and estate planning,” using professionals that specialize in “corporate, trust and tax matters.”

According to the Guardian, they have offices in 42 countries, employing over 600 people and acting for 300,000 companies.

The Panama Papers include the names of 12 current and former world leaders, such as the Russian president, Vladimir Putin, prime minister of the United Kingdom, David Cameron, and Iran’s former president, Mahmoud Ahmadinejad.

The revelation has caused a large stirrup across the world, raising questions about the undeniable secrecy that permeates the current global financial system.

Mossack Fonseca released a statement on April 4, saying, “Our industry is not particularly well understood by the public, and unfortunately this series of articles will only serve to deepen that confusion.”

“While we may have been the victim of a data breach, nothing we’ve seen in this illegally obtained cache of documents suggests we’ve done anything illegal,” the firm said. “And that’s very much in keeping with the global reputation we’ve built over the past 40 years of doing business the right way, right here in Panama,” according to CNN.

More than half of Mossack Fonseca’s clients used fake names in order to hide their identities, one in particular went as far as to use a fictional character’s name, “Harry Potter.”

No United States officials or citizens have been linked to the papers, however this might be because tax havens exist at anyone’s disposal.

Economist and senior advisor to the Tax Justice Network, James Henry, told Fusion, “Basically, we have an onshore haven industry in the U.S. that is as secretive as anywhere.”

However, the Panama Papers do include South American politicians and corporations – the most notable being the FIFA organization.

The papers disclose information about hidden arrangements and agreements of corruption from former vice president, Eugenio Figueredo. He was involved in the laundering of money from certain countries who bid for the potential to host or lead the world cup.

FIFA was founded in 1904. According to their organization’s website, founding countries ranged from Belgium, Denmark, France, the Netherlands, Spain, Sweden and Switzerland. The corporation intends to unify laws of the game, and also to make a clear and fair setting for all players and future soccer developments. However, now they struggle with current governance.

Following the claims, FIFA’s ethics team began to investigate; they believe it is a “data breach.” Currently they continue to service clients and continue their association with the legal firm, but it doesn’t undermine their involvement in this ordeal.

In 2015, investigations were being implemented by the United States to charge suspected members of the board for bribery and favoritism.

Michel Platini is one of the famous soccer players involved. According to the New York Daily News, after creating an offshore company in Panama in 2007, Platini then became president of UEFA, the Union of European Football Associations. The corporation gave him unlimited privileges as an attorney for the enterprise.

According to Nathaniel Vinton from the New York Daily News, Hugo and Mariano Jinkis ran Full Play, a company associated with marketing rights for international soccer.

They were linked to a company in Nevada, and had been paying millions in bribes for FIFA in Latin America. There has been several business ties with the men accused and institutions regarding soccer clubs.

Jailyn Mitchell, freshman at St. John’s and Marketing major, said, “It’s honestly not surprising, big corporations always look for a way to cut taxes and save their money. It’s just how things are. It’ll keep happening until someone actually steps up to correct the system.”

There are claims that the ICIJ used an anonymous source about the documents and resources for cautionary reasons. This has opened up several doors to the offshore accounts. Secrecy has gone on for a while and now their illegal activities have been reported.

Moving forward, FIFA will be monitored to ensure a better environment for soccer and that there will be, hopefully, no more corruption.