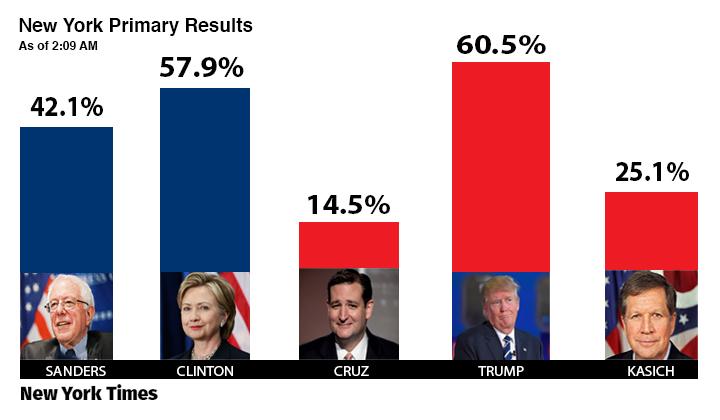 Donald Trump and Hillary Clinton swept New York State Tuesday night with 61 percent and 58 percent in their respective races, according to Politico.

John Kasich, who has consistently been a third place finish in each race, finished in second place with 25 percent of the vote, according to Politico.

Ted Cruz, largely regarded as the face of the anti-Trump movement, barely held on with 15 percent of GOP support in the state.

Results were promising for Trump, who was predicted to win big in New York, taking 89 delegates.

On the Democratic side, Hillary Clinton led Bernie Sanders with 169 delegates.

Sanders finished with 42 percent and 104 delegates.

Clinton was widely seen as the Democratic darling in New York State, with many voters supporting her based on her eight years as a New York State senator.

Sanders fought back hard, holding several rallies with massive turnouts in the week leading up to Tuesday’s contest.

Sanders took a 40 hour trip to Rome Friday through Saturday, which many saw as a poor decision in the midst of the other candidates’ events.

Sanders met with Pope Francis in the midst of attending a conference about worldwide economic inequality and climate change, according to the Associated Press.

Sanders has a record of winning, typically in a landslide, when he is engaged in a strong ground operation, meeting with voters in their respective states. Many saw this trip as a possible hindrance to his campaign efforts.