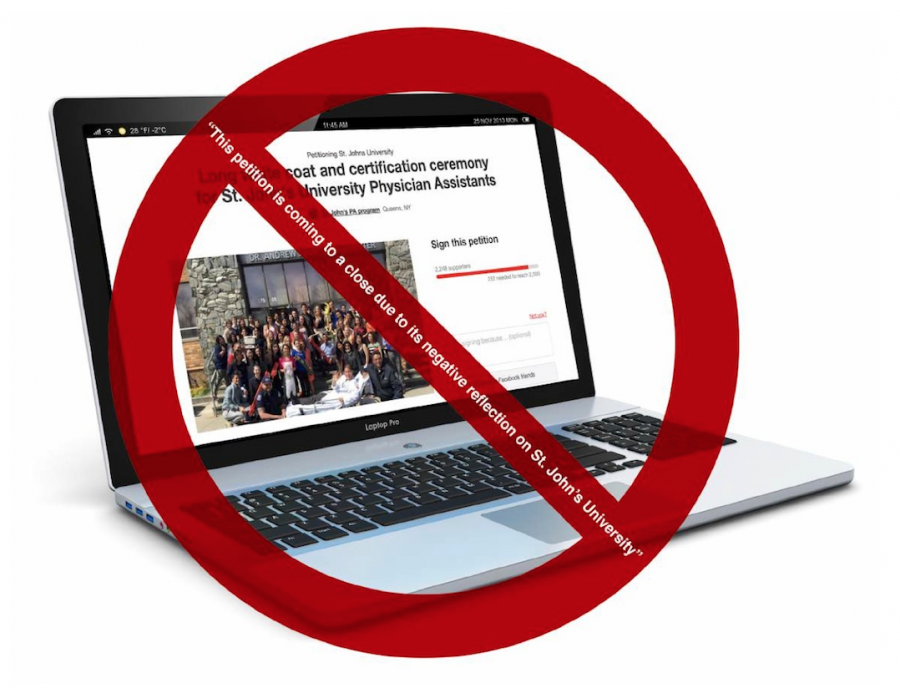 But according to University administration, the petition was misleading.

The petition, posted on change.org, was removed by its creator about a week ago, citing “its negative reflection on St. John’s University.” At the time of its removal it did not state who specifically posted the petition.

The petition stated, “The Physician Assistant class of 2016 will be the first graduating class from the St. John’s University program to not receive the honor of a long white coat graduating ceremony.”

University administration said the wording of the petition was inaccurate.

Murphy said the white coat ceremony refers to an event held to welcome new students into all medical professions. For Physician Assistant students, this ceremony is held in October during students’ junior year.

“We would never discontinue a ceremony as traditional as that,” she said.

The ceremony that is being discontinued, she said, is the Allied Health Certificate Ceremony. This event was held to honor students who were completing the Physician Assistant, Clinical Laboratory Science and Radiologic Science programs.

When these programs were acquired from St. Vincent’s Medical Center years ago, certificate students were unable to participate in the undergraduate commencement, Murphy said. The certificate ceremony was designed specifically for these students.

In an email to Physician Assistant students, which was obtained by The Torch, Russell DiGate, dean of the College of Pharmacy and Health Sciences, said administration believes the need for the certificate ceremony is negated by the fact that there are no longer any certificate students in the Radiologic Sciences or Clinical Laboratory Sciences programs.

Now, certificate students in the Physician Assistant program are allowed to participate in the general undergraduate commencement ceremony, DiGate wrote.

But not everybody is pleased with this development.

Lindsay Armstrong, the only certificate student in the Physician Assistant program’s graduating class of 2016, said, “I was very disappointed to learn the ceremony was cancelled.”

She added, “Although I am now permitted to walk at graduation, that is something I never planned on doing and despite the ceremony being cancelled, I still choose not to walk during commencement.”

She said she already received her bachelor’s degree and participated in a commencement ceremony.

Armstrong explained the differences between obtaining a bachelor’s degree and a certificate, saying, “In contrast to the other students, being a certificate student you complete your undergraduate degree and then apply to the PA program through CASPA.”

CASPA is the Central Application Service for Physician Assistants.

“As a certificate student you only attend school at the Bartilucci Center, the first year for didactic studies, and the following year for clinical rotations. When I graduate I will not receive a bachelor’s like the rest of the class, but a certificate, which enables me to sit for the boards,” Armstrong said.

According to Murphy, it was decided last year that the certificate ceremony would be discontinued, but it was still held for students in the class of 2015. She said the removal of the ceremony was announced to this year’s graduating class at the beginning of the current academic year.

But Armstrong said the class of 2016’s Physician Assistant Education Program Clinical Guidelines include this on page 25: “The Certificate conferral ceremony is held in June.” This document was last revised June 17.

“I believe there was some sort of announcement made at the beginning of the year, but that was when we were still divided by last names on call back day, so only a few of the students heard it, not all of us,” said Shannon Kerley, a senior in the Physician Assistant program.

Murphy said that the administration is not sure why the removal of the ceremony recently became an issue when the announcement was made months ago.

“What I was told by the program directors was that they [the students] understood and that there was no real discussion at the time,” she said. “No one reached out to the dean’s office to discuss it at that time either.”

Armstrong said, “I do not believe the students should be held accountable for this lack of communication. A letter or email was never officially sent out saying the ceremony was cancelled.”

According to her, professors did not refer to the ceremony as the certificate ceremony when they announced its discontinuation, which she believes led to some of the miscommunication.

“I know administration was very upset about the petition but it seems to be more about semantics than about what the ceremony represents,” she said.

Added Armstrong, “If the petition upset them [administration] by referring to it as the “white coat ceremony,” it was not intentional and was a result of miscommunication.”

One of the major issues arising from the apparent miscommunication stemmed from the reactions of alumni.

Murphy indicated that the University did receive some backlash as the petition gained momentum online. She said alumni donated all of the white coats for last year’s white coat ceremony, which led to confusion.

“Basically, there’s information put out on the web that we’re cancelling the ceremony after we just received a lot of donations for these coats, so yes, there was some discussion about it and it was rather troubling, because we didn’t want to appear that we were doing something that was not correct,” Murphy said.

Soon after the removal of the petition, students met with administration to discuss the petition and the ceremonies. In addition to explaining the differences between the two ceremonies to students, Murphy said she told students the lines of communication between the Dean’s office and students are open.

“You know, we could’ve addressed this back in September if they had concerns about this,” she said. “But we just found out. So I thought it was really important to make sure that they know that they do have a line of communication to the Dean’s office.”

While some students were pleased with the meeting, others expressed disappointment.

Armstrong said, “When they called the meeting on April 11, we received an email stating, ‘Dear Students, You are invited to a meeting called by the Department at the Bartilucci Center on Monday April 11 at 4:30 p.m. if your schedule permits.’”

She added, “This email never addressed what the meeting was about and only allowed a handful of clinical year students to attend since we were not excused from our rotations.”

Murphy said they discussed with students getting together for a less formal event this year.

She added that Dr. Candace Smith, the chairperson of the Clinical Health Professions Department, offered to give a gift of a white coat to graduating seniors.

Noreen White, a senior in the Physician Assistant program said, “I believe in collaboration with the College of Pharmacy and Health Sciences, administrators will be able to brainstorm a way to celebrate all that we have accomplished in our rigorous program, and hopefully do so to the satisfaction of everyone involved.”

But some students are still left feeling unsatisfied.

“Being in PA school as an undergrad is far more difficult than one could imagine,” Armstrong said. “Being that young, you make a lot of sacrifices and are forced to grow up very quickly … If the university does not believe we deserve this distinction so be it. I’m still honored to have attended this program but I know what my classmates and I deserve.”