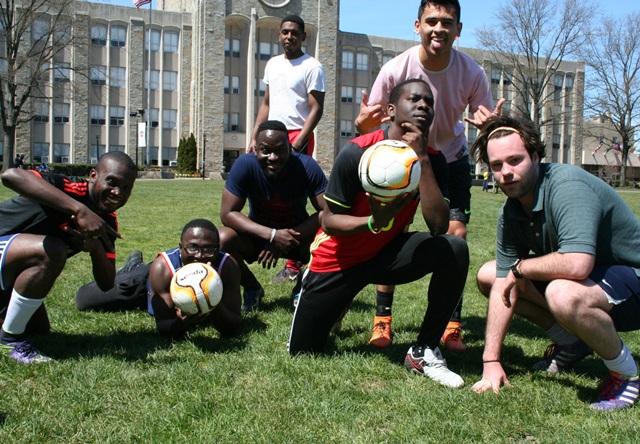 Last Saturday marked the first ever Solidarity Festival at St. John’s University, coordinated by Dr. Meghan Clark, an Assistant Professor in the Department of Theology and Religious Studies.

The event brought together students, faculty and various organizations from within New York state who were interested in learning and teaching about different forms of social justice.

“We really wanted to show the many aspects of our lives, wherein if we’re paying attention and we ask the right questions we’ll see that we can be in solidarity with workers rather than part of the problem,” said Dr. Clark about the festival.

The event was inspired by Don Bosco Workers, Inc., a non-profit grassroots organization that speaks to her classes semesterly.

Don Bosco Workers, Inc., based in Port Chester, N.Y., was established by Holy Rosary Church ten years ago. Part of the organization’s goals is to cease exploitation of Latino immigrant workers by ensuring fair wages and safe work environments.

The organization, directed by Gonzalo Cruz, is led by over 200 members of immigrants and laborers. Cruz, who visits the university two or three times a year was invited to Professor Clark’s class to explain Don Bosco’s campaign.

“I think it’s great for us to educate and meet the students so they can have a different mindset about the immigrant community,” said Cruz.

Don Bosco Workers, Inc. works in coalition with a myriad of groups all around New York, including Queens. Their workers were even asked to construct the Pope’s chair for his visit to Madison Square Garden last September, as Pope Francis asked specifically for it to be constructed by immigrants workers, according to Cruz and Univision Noticias.

The event began at 1 p.m. with tables set up in front of the St. Thomas More Church, displaying the organizations and student research pertaining to social justice.

There was a Catholic Relief Services table, selling fair trade certified cocoa, Divine chocolates and accessories. Next to them were Adhikaar and Healthy Salon, introducing their nail salon justice organizations.

The Solidarity Festival also had a mini soccer tournament on the Great Lawn. Naim Rogers, a senior resident assistant, organized it with the help of Paolo Tagatat, and purchased fair trade certified soccer balls keeping with the spirit of the Festival.

“As everyone knows, soccer is like a global sport and it surpasses cultures and different things, and even among the tournament here you can see different cultures coming out,” said Rogers, “So we thought that by using fair trade soccer balls it’s a great way to get the conversation started.”

Global Loan Opportunities for Building Entrepreneurs (GLOBE), a student-managed microloan program at the Tobin College of Business dedicated to helping people living in poverty finance their businesses by loaning them small sums of money, also came to support the cause.

Some of these research posters included investigations on Dole and Chiquita’s monopoly of bananas and exploitation of workers in Latin America as well as Alta Gracia’s fair trade clothing company based in the Dominican Republic and Fair Phones initiative to safeguard miners and workers who supply the metals that make up our phones.

The festival also included an art exhibition called Project Luz by Sol Aramendi. There was a tent set up next to the entrance of the St. Thomas More Church, which had orange and neon stripes that represented a construction site.

The tent was dark inside, however Aramendi directed you to take a seat in front of one of the walls. Aramendi then explained how light travels upside down and that our brains make it right side up.

Once she flipped the patch and the light came in, you were able to see the Solidarity Festival taking place outside, however it was upside down. The point of this was to experience an immigrant worker’s point of view, as they often times are looking from the outside-in.

Aramendi has been doing this project for 12 years. Currently, she is working with Don Bosco in order to create an application that will help contractors and workers keep track of people who are prone to stealing wages and mistreating them just because they’re immigrants. The app will be launched in N.Y. by the end of May and nationally by the end of June.

During the discussion panel, the organizations from outside of school spoke about their experiences.

Adriana Cruz, a graduate student and labor union organizer at Workers United, spoke about Healthy Salons and how they work in coalition with Adhikaar in order to ensure that those who work in nail salons are receiving the compensation they deserve.

Adhikaar, which means “rights” in Nepali, is also a New York-based, non-profit organization, however it seeks justice for Nepali-speaking workers in particular.

According to their website, the organization has been able to successfully pass laws and policies that help protect these workers, including the New York State Domestic Workers Bill of Rights and the International Domestic Workers’ Convention.

Although there were recent laws and legislatures passed to help immigrant nail salon workers, Adriana stressed that it wasn’t enough.

“Policy is never enough,” said Adriana. “As we continued the work, the labor union was invited by Adhikaar’s worker center and that encouraged the question: what’s the next step?”

Meene Sunuwal, who moved from Nepal to New York six years ago, came to represent Adhikaar.

Sunuwal spoke about the hardships of working in a nail salon for five years in N.Y., which can include many health issues and long hours with minimum wage pay. She eventually learned about her rights after joining the organization. She stated that the organization helped her speak up.

Don Bosco’s president, Dr. Ann Heekin, spoke at the discussion panel and expressed her gratitude to Dr. Clark and St. John’s  for working with the organization in order to raise awareness of the campaign’s initiatives.

“We would like to thank you [Dr. Clark] and St. John’s… What you’re doing here is that you’re empowering leaders so that they can go back and continue the good work,” said Dr. Heekin.

She added, “Often times… They spend so much of their day empowering others that what’s lacking sometimes is their own nourishment. So what you’ve done today I think is to nourish all of us and give us the chutzpah to go back and do work, so thank you.”

The day ended with Father Griffin, the executive director of the Vincentian Center for Church and Society, conducting a celebratory mass for worker justice.

Editor’s note: In the print April 20 version of the Torch and earlier version online, Sol Aramendi’s name was misspelled. On the print version it appears as ‘Solara Mendi,’ however the corrections have been made here. Additional pictures of the event were also provided by Dr. Meghan Clark so that those who participated in Project Luz may be able to see their pictures.