A Night in the Garden: SJU’s own art museum 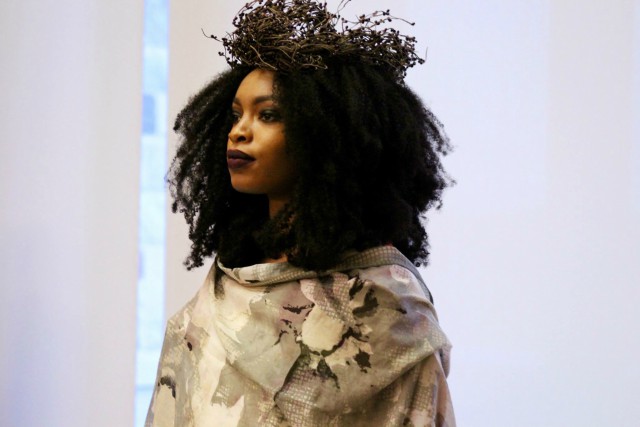 Junior Izzy Odigie models for Ben Achille's art exhibition, which was a representation ofneach of his models' reflection in the Garden of Eden.

It was all about the beautiful gifts of God’s creation of people and nature at “A Night in the Garden.”

As a part of Spring Week, the event took place on April 21, presented by Eden and Sinai’s Radiant Liturgical Praise Dance Team of St. John’s University in the D’Angelo Center foyer.

Starting at 6:30 p.m., the foyer was transformed into a museum of live and still art with unique pieces of jewelry to buy from, along with refreshments for guests.

The president of Eden, Kai Butler, spoke about the significance of bringing this event to life and expressed the organization’s desire to make this a constant in future Spring Weeks.

Butler stated, “My E-board and the E-board of Sinai’s Radiant Liturgical Dance Ministry, who collaborated with us on this event, felt that it was so important because there is so much talent and artistic individuals here on campus that go unrecognized and unnoticed.”

“In Eden we brand ourselves as the intersection of faith and creativity,” added Butler. “We believe that God was the greatest creator of all time and being made in his image and likeness we all possess a level of creativity.”

“And we simply wanted to push that message across campus while highlighting the different talents of our student body, ” she said.

Sophomore Roberto Benoit’s sketches and paintings of different objects that both represented his Christianity and cultural background were shown.

With sophomore Keith Buxton on the saxophone, the organization’s band, Kingdom Music, set the tone in the background. Kingdom Music is led by student Caleb Merlain.

Many other students who were unaffiliated with the organization were also able to show their artwork to the guests that came to support the event.

Junior Ben Achilles, a student unaffiliated with Eden’s organization, was the stylist and creator behind the live art that was shown throughout the night, with models that he used to showcase his creativity.

Juniors Maia Edmond, Cassius McCleskey and Izzy Odigie each were covered in fabrics of floral print and a crown of thorns on their heads.

Each model wore a tag that represented themselves.

“Cassius is a gay man, Izzy is head of the African Students Association and is very into black rights and Maia is a creative independent artist,” said Achilles.

“Their tags represented part of them in reflection of Christianity and they were forgotten the night before in the Garden of Eden, even though they are powerful and beautiful,” said Achilles.

There was also a video of different scenes of what seemed to be an artistic short film playing in the conference room, which was filmed by Alexander Meija.

There were fashion editorial photographs by graduate Xavier Duah with model Walletee Watson from Q Model Management, NY on display.

Sophomore Alexis Manzano said, “So many St. John’s students are dynamic in the arts and have so much talent.”

“I wish our school encouraged more events like these or held more when it comes to culture and arts,” she said.

Added Manzano, “We are supposed to be this super diverse, cultural school, we need more opportunities like this for students.”

Editor’s note: In the print April 27 version of the Torch, the article did not state the affiliations of students who participated in the event. This article was edited after publication for the purpose of clarifying the affiliations of the students mentioned. The jazz band’s name, Kingdom Music, has also been added to the story.