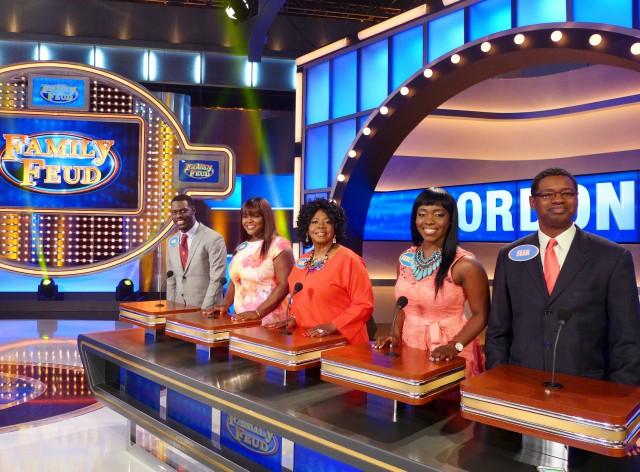 Paul 'Gee' Gordon and his family on Family Feud, airing in August.

On May 13, 2016, St. John’s alum Paul “Gee” Gordon will appear on the famous Family Feud show hosted by Steve Harvey.

Last year in May, the Torch sat down with Gordon and got to know more about him and his experience on nailing the audition to participate on Family Feud.

At that interview, he said that him and his family were long time fans of the show and were focused on “winning it all.”

Now, without being able to share much on the experience without disclosing the outcome of the show beforehand, he expects the support of the SJU community.

The show was taped in August. He flew to Atlanta with his mom, two sisters and his cousin.

According to Gordon, he wore an SJU tie when recording the show to represent his alma mater.

Gordon, who’s known around SJU because of his St. John’s Now videos and hosting campus activities, was already excited to meet Harvey.

His expectations exceeded everything he could hope for.

“[Harvey] is an awesome guy, we clicked immediately,” Gordon said. “We were just going back and forth with jokes for, like, literally 20 minutes straight. There was no dull moment.” According to Gordon, Harvey is a very encouraging person.

Gordon is very excited to share his life-changing experience with the SJU community.

He said, “When the Family Feud show goes on, it’s going to be everything that people expected plus more.”