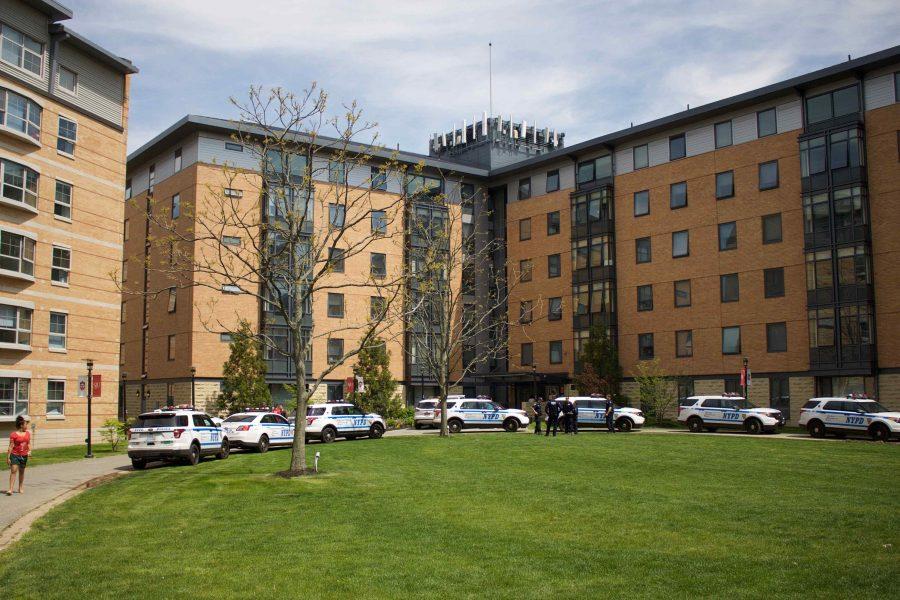 Three males entered an on-campus residence hall earlier today, displaying a gun and firing a bullet, according to an alert from the Department of Public Safety.

The alert was issued around 1:50 PM this afternoon. It states that the males entered Hollis Hall and attempted to remove money from inside the residence hall. At around 2:15 PM, NYPD and Public Safety cars lined the area in front of the building. Several residents said they were unaware of the situation until they received the text and phone call alerts from Public Safety

According to the alert issued by Public Safety, the NYPD is investigating and there are no continuing threats to the campus.

A NYPD spokesperson said that they did not have information regarding the incident at this time.

A St. John’s University spokesperson did not immediately respond to request for comment.

Update 4:10 PM: A NYPD spokesperson told the Torch that a dispute unfolded between the three males who entered the building, and four other people in room 510 in Hollis Hall. A gun was fired and the bullet struck a wall. No injuries were reported.

The males fled on foot and were apprehended by NYPD officers on 167th Street and Grand Central Parkway.

Information on the type of gun that was fired is unavailable at this time. According to the spokesperson, no charges have been filed yet.

Update 4:55 PM: The Department of Public Safety has sent an email to students regarding the situation.

The email says: “Earlier this afternoon, three males entered a residence hall on the Queens campus, displayed a gun, and discharged a bullet in what appears to be a robbery.  There were no injuries. The NYPD responded to an emergency call and the three suspects were apprehended and arrested off campus.

Safety is a top priority at St. John’s, and at this time, there is no continuing threat to the campus community. The University is working closely with the NYPD, which is continuing its investigation at this time. Updates will be provided as available.

All SJU community members should immediately notify 911 and Public Safety (718-990-5252) as soon as possible in the event of any emergency or if you observe any type of suspicious activity.”

Update 5:40 PM: According to law enforcement sources, the weapon apprehended appears to be a revolver.

This story is developing, keep checking back for more information.