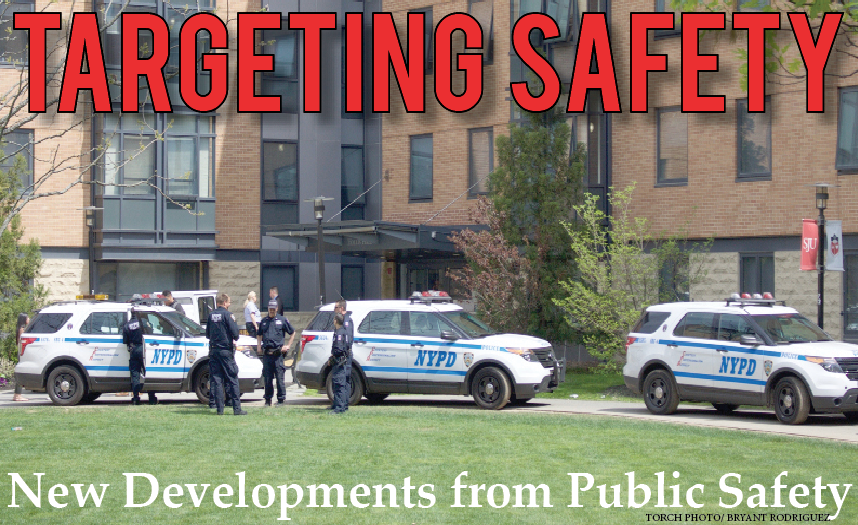 At St. John’s public safety is of utmost importance. But even with a highly trained staff, low crime statistics and stringent regulations, incidents can occur.

Returning students might remember how last May the University community was shaken when a shot was fired inside of Hollis as three men attempted to burglarize students in their dorm room. A prompt response by the Office of Public Safety and the New York Police Department quickly led to the arrest of the perpetrators.

But now, Vice President of Public Safety, Tom Lawrence, says his staff has revamped many of its safety guidelines and procedures to prevent similar incidents from occurring.

“We think we’re top-notch to begin with, but we’re always reviewing our policies and procedures continually,” Lawrence said in an interview with the Torch last week.

According to him, Public Safety, along with several departments and administrators within St. John’s, from Student Affairs to President Gempesaw, have been working to improve security measures since last semester’s incident.

One of the newest sets of guidelines for students includes “Active Shooter Training,” something that SJU employees already undergo.

“This was something that we thought was very important; that our students get it, our customers, our biggest population, receive it, and working closely with Dr. [Kathryn] Hutchinson, we were able to make it happen,” Lawrence said.

According to him, all resident students are now required to undergo this training, along with the regularly scheduled fire safety seminar at the beginning of the fall semester. He said freshmen have already undergone the training and that upperclassmen will begin to receive the training at floor meetings, which began this week.

Active Shooter Training encompasses knowing escape routes, where and how to hide, and how to be prepared to fight if an active shooter is on campus.

Students also learn the meaning behind terms used during emergency correspondences such as “Shelter in Place” and “Hide and Fight.”

During this training, students are informed about whom they should notify in the case of an emergency, such as 911 and Public Safety. They are then shown how to make the call and told how students themselves are notified.

According to Lawrence, the University worked this past summer to upgrade its communication system, speeding up the time it takes for students to receive notifications regarding emergencies.

“We’ve upgraded [the notification] system so that the calls now come in half the time that they used to come in,” he said.

With roughly 20,000 students signed up to receive emergency notifications via text and voice messages on their cell phones, Lawrence said that text messages were generally sent out and received quickly but phone calls took longer.

Along with halving the time it takes for voice messages to be delivered, messages will also appear on television screens throughout campus.

“The exact message will show up on that screen, in addition to any updates,” he said.

Notifications will appear on St. John’s’ homepage and MySJU as well. Links will be provided to see previous messages, allowing people to follow along with what’s happening if they don’t have their phone close by.

Lawrence also said the University has contracted with a call center in an effort to properly handle the amount of phone calls received by the Office of Public Safety during emergencies.

“Normally in these types of situations, not in this situation, but we normally get inundated with calls,” he said. “We have a couple of officers and just can’t keep up with the volume.”

The outsourced call center will act on Public Safety’s behalf to answer questions and take calls during times of emergency.

Lawrence noted that the NYPD works closely with the University to keep the campus safe. They are subscribed to the same messaging system that alerts students of emergencies.

He added that Public Safety is working with the IT department at the University to institute an identification scanner for licenses and passports when non-SJU visitors check into dorms.

“Now we type in your name, and sometimes there’s human error, there’s misspellings,” he said. “We usually catch that back at Public Safety the next day, but this way everything that’s on your license, including a picture, would be captured, so we’re reviewing that.”

He said the University is hoping to implement it by the end of this semester.

A family assistance center off campus has also been identified at the Bartilucci Center, along with staff, to respond in the event of emergencies on campus.

“Public safety is everyone’s responsibility,” Lawrence said. “Poor decisions can result in people getting hurt, so we ask that everybody believes in the Public Safety policy and the procedures that we have in place and adheres to them.”

Regarding last semester’s incident, Lawrence expressed tremendous pride toward his staff. Within minutes of receiving a phone call regarding the incident in Hollis, he said Public Safety officers were on the case following the perpetrators off campus.

He said he is “Proud of our officers and the way they responded.”

Between Public Safety and the NYPD, who works closely with the University, officers quickly apprehended the culprits, identified, and charged them.

When it comes to move-out week this year, Lawrence said uniformed officers will be stationed in each residence hall to aid in the normally chaotic process.

“It’s a tough job for our student workers, especially during move-in and move-out” he said. “So we want to provide them with some assistance.”