Tearing down the Wall of Prejudice 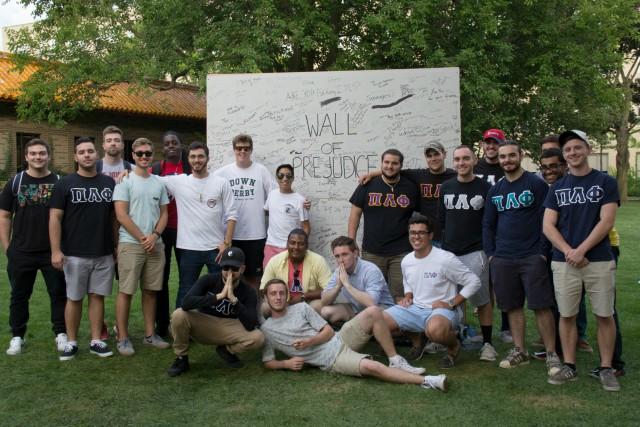 The brothers of the Pi Lambda Phi fraternity have put into practice what they preach this past Thursday and Friday by breaking down the Wall of Prejudice. A section of drywall was set up across from the D’Angelo Center and the fraternity brothers invited passersby to write on the wall. By the end of the day on Friday the wall was filled with slurs and derogatory phrases in various colors of ink.

“Like any other corporation or organization, whether it be a fraternity, sorority, corporation, company… All of them have their own charitable philanthropy that they do. For us, it’s the elimination of prejudice,” fraternity brother Dan Esposito said.

“It could be as simple as elementary stuff like ‘You’re mean’, or ‘You’re stupid’, or ‘You’re dumb’. But it can go all the way up to really racist stuff like the n-word or the c-word towards women,” Esposito said. “You can write anything on it. Something that was insulting or inappropriate.”

Yet the Wall of Prejudice was not erected to promote prejudice. “When we say breaking down barriers we mean it literally; we take hammers to the wall and break it down,” Esposito continued.

Pi Lambda Phi’s St. John’s chapter held this event a few years ago and another branch of the fraternity also held the event.

“We are going to try to do it every single year to help promote diversity, not only because we are the most diverse fraternity on campus, but for more people to join and help them express themselves and get their culture out there,” Esposito said.

He continued by telling of his personal connection to this event and why he felt that it was important; “Personally, as a business owner, I see a lot of prejudice in a lot of people’s work spaces. Running a doctor’s office I see a lot of it in healthcare. Against men, women, children, muslims, buddhists, christians, jews, everybody. All skin colors, everybody. And, when I saw this, I said ‘Oh, wow this is something that we really gotta do.”