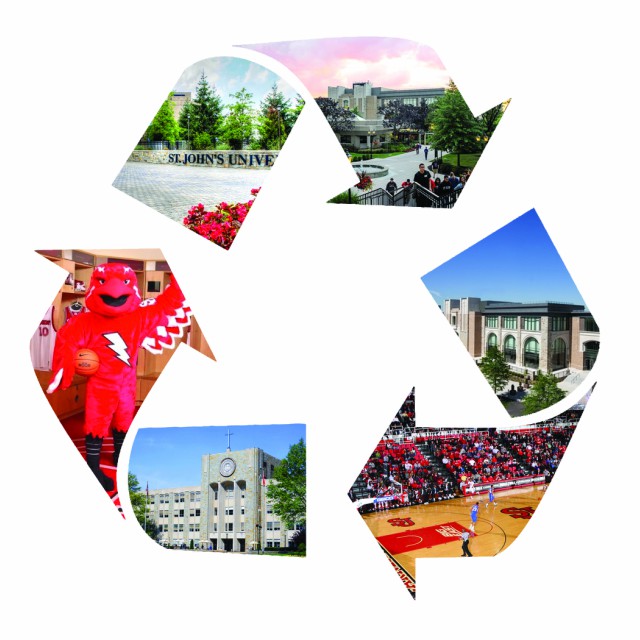 Embedding sustainable and energy efficient practices in St. John’s University has been an ongoing conversation for more than 35 years.

With the New York Carbon Challenge set in motion by Mayor Bill de Blasio, the city has committed itself to becoming greener by “reducing citywide greenhouse gas emissions 80 percent below 2005 levels by 2050,” according to the NYC Mayor’s Office of Sustainability.

The challenge has already included 17 of New York City’s leading universities, 11 of its largest hospital organizations, 12 global companies, 19 residential management firms and 19 hotels. All of these have already reduced 30 percent of their building-based emissions.

According to Thomas Goldsmith, director of the university’s Environmental and Energy Conservation department, St. John’s is one of the 17 universities leading this challenge, thanks to all the initiatives taken throughout the past nine years when the University first signed the challenge.

For instance, the Queens campus has received Tree Campus USA participation awards for the past four years for planting over 3,000 trees and meeting certain criteria that includes having a tree care committee, tree care program with funds and an Academic Service Learning Component.

However, there are some who believe that the University isn’t living up to its full potential when it comes to applying sustainable practices on campus.

As early as 1978, a former student, Bill Lauto, proposed that the school install solar panels in St. Augustine Hall to provide heating. The proposal was dismissed because the school didn’t see it as a good enough investment at the time.

After meeting Lauto, Basilio G. Monteiro, an associate professor in the International Communication Department, is bringing back his idea to install these solar panels in St. Augustine, which is scheduled to undergo reoperations in 2017.

Monteiro believes that it would be a step-forward for the University in terms of setting an example for the community and reaching energy independence.

“The university is a very important citizen of the Queens community,” Monteiro said. “And as an important citizen, I think we have to provide leadership in terms of how we can contribute towards this problem that we have of climate change.”

But, according to Goldsmith, the installment of solar panels won’t occur any time soon because the University is primarily focusing on conserving energy and renovating infrastructures first.

Sophomore and Earth Club President, Carissa Herb, became interested in Monteiro’s initiatives when a friend of hers introduced her to the topic last year.

After meeting with Monteiro and discussing the idea of solar panel installations, Herb did extensive research on carbon reduction, and even wrote an opinion piece for the Torch last year.

“A lot of the repercussion of carbon emissions are irreversible so those that we can control, we might as well,” Herb said. “It just makes sense to do what’s better for the environment … We have to think long term.”

She then met with Goldsmith to discuss the possibility of installing solar panels on St. Augustine, and says that he was very transparent with her about what the University has already done and will be doing in the future to increase sustainability on campus.

Goldsmith provided Herb with information of some of these projects, which include: High Efficiency Chilled Water Plants, Lighting Projects and Domestic Water Reduction.

Altogether, the University invested $25 million – $5 million of which were grants – and have saved the school $2.1 million in energy. These projects were funded by the DASNY TELP, NYSERDA, and ARRA, which are grant programs designed to help institutions invest in environmentally-friendly equipment. The school now has a payback period of nine and a half years for all these projects combined.

Thanks to these energy efficiency projects, St. John’s has reduced 6,200 tons of carbon emissions, according to Goldsmith’s documents.

With Goldsmith’s help, Herb concluded that the St. Augustine building isn’t the best way to go about installing solar panels. The repairs that will be made are cosmetic, so in order for the panels to work a reconstruction of the whole interior would have to take place, which wouldn’t be practical.

Yet, Herb found that in 2013 Mr. Goldsmith proposed the installation of solar panels in Taffner Field House.

But the project wasn’t picked up. Herb thinks that this is due to the payback period that the school would take on.

Goldsmith says that for the installation of solar panels to make sense, upgrading and renovating campus infrastructures and equipment in order to conserve energy has to come first. This way, by reducing the use of wasteful energy, the next step would be to ‘build green’ or install solar panels.

“In a university there are so many little resources, so many competing for those resources,” said Goldsmith. “A good example of that is if you take the Marillac classroom environment … that’s old, outdated infrastructures and it’s very inefficient infrastructures, so it’s costing a lot of money to heat and cool the classrooms.”

However, Herb argues that New York State offers grants that will take away $102,000 from the cost of the project as stated in the pricing reports of the New York State Energy Research and Development Authority.

Therefore, Herb believes the project can produce payoffs, as it means that St. John’s is keeping with the NYC Carbon Challenge.

“The installation of solar panels on campus would not only help us reduce our carbon footprint,” says Herb, “But allow us to be a leader for the rest of the bureau to make more environmentally friendly choices.”

Despite this, Goldsmith brings up a counterargument. Although he doubts that there is a probability of installing solar panels in the roof of Taffner any time soon, he believes that this won’t set back St. John’s role as a leader in sustainability.

“If you look at the models for New York State, what they’re asking you to do is to reduce your consumption first before you buy into green power,” said Goldsmith. “So the right thing to do, as well as what Pope Francis urges, is to reduce the culture of waste. And in reducing waste, we’re conserving.