Dr. Camacho talks about the details of the new two-week program offered by Study Abroad 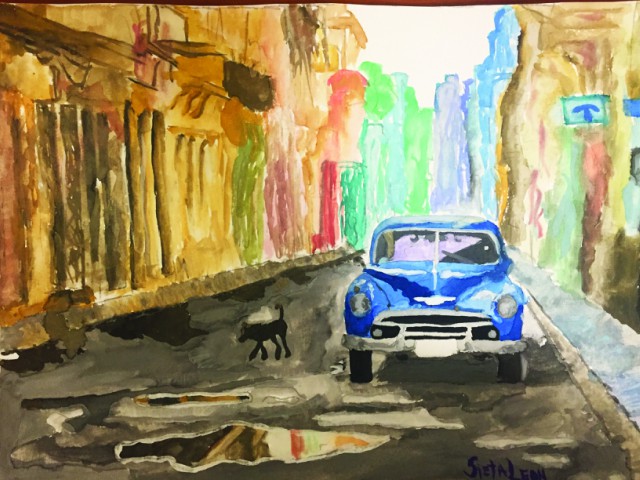 After nearly 50 years of political tensions, the United States is now beginning to take advantage of the opportunity to enter Cuba after diplomatic relations between the two countries were restored this past July. This decision extends to St. John’s, where The Center for Latin American and Caribbean Studies Chair and the program director for the trip, Dr. Alina Camacho-Gingerich, are excited to announce a short-term program to Havana, Cuba during the winter intersession from Jan. 4-18, 2017 named “Cuba from Within.”

“It’s very exciting to have the course and trip, especially because of the diplomatic relations President Obama re-established between Cuba and the US,” said program director Camacho.

The travel ban on the U.S. into Cuba began under President John F. Kennedy after the Cuban Missile Crisis in 1962, and was officially lifted in 2010. Up until Jan. 2016, Americans had to give prior notice to the Cuban government and go through an official evaluation process in order to travel there.

Camacho has traveled back to her native Cuba multiple times over the last few years to create a curriculum to benefit American students interested in Cuban culture, literature, history, politics and other related fields of study, as well as feed into her own intellectual curiosities. Camacho is a professor of Spanish at St. John’s and emigrated from Cuba with her family as a teenager.

The program itself is open to undergraduate and graduate students and there are three courses available to take. The classes for undergraduates include “SPA 4990A: Cuban Culture, History, Politics, Art, and Literature,” offered in Spanish or English and “LAC 1000C: Language and Culture in Cuba.” The graduate class offered is “SPA 306: Seminar on Cuban Literature, Culture, and Art.”

The targeted amount of students to take on the trip is 25 but since there has been an overwhelming amount of interest with 58 applications, the number may be subject to change.

Assistant Director of Academics and Short-Term Programs, Greg Bruhn adds, “This has been the most sought after program I’ve ever seen.” Bruhn noted that students of all majors can attend the program, not just Spanish majors.

“It’s a two-week intensive program in Cuba, so the idea is to make sure that the students get to know Cuba as well as possible in that short amount of time in the intersession between the end of fall semester and before the spring semester,” said Camacho.

The official price of the program is $2,500 which includes the flight from Miami to Havana as well as hotel accommodations.

Students must pay separately for their flight to Miami and course credit.

According to the program itinerary, while in Havana, students will get acquainted with its many neighborhoods, tour the University of Havana, meet with Cuban intellectuals and have visits to Casa de las Américas (House of the Americas), Palacio de los Capitanes Generales (City Museum), Museo del Arte Contemporáneo Cubano (Museum of Contemporary Cuban Art), Port of Mariel Special Economic Zone, Museum of the Revolution, and Finca Vigía, Ernest Hemingway’s home and museum in Cuba.

Students will also get the opportunity to visit La Timba neighborhood and meet with writers, professors, trainers, and students involved in the Nicolás Guillén Foundation’s community project.

Students will also have the opportunity to keep in touch with their Vincentian roots and visit a general hospital or clinic.

Day trips outside of the home base of Havana will include the cities of Matanzas, Varadero, Trinidad, Cienfuegos, Pinar del Río Province and Viñales Valley where students will visit a tobacco cooperative and meet with tobacco growers and workers.

Camacho explained that students must also complete a research project in an area that interests them.

“There will be other optional tours together with the classes as well as workshops and each student will have a research project assigned on an aspect of Cuban culture – it could be from anywhere from literature to the arts or economics,” Camacho said.

She hopes the students will remember this unique program for years to come and especially have a wider understanding and appreciation for Cuban culture.

“And a thirst for continuing that first time experience in terms of if they’re still doing research in Cuba the different disciplines students might be interested in. And to go back, explore the rest of the island and go more into depth of culture and life which is so very rich,” she added.

As of Tues. Oct. 4, the Office of Global Studies has received 58 applications, while 21 students have been accepted so far and nine have confirmed their participation  in the program.

They are still in the process of accepting students and will accept applications until the Oct. 14 deadline. Camacho mentioned that she continues to receive calls about the trip from students that do not even attend St. John’s.

Three more months remain before Dr. Camacho will set off for Cuba with a select number of students.  Those with any questions should  visit the Office of Global Studies in Sun Yat Sen Hall.

Camacho ends, “That thirst for knowledge and that passion for Caribbean culture is what I hope the students will gain.”