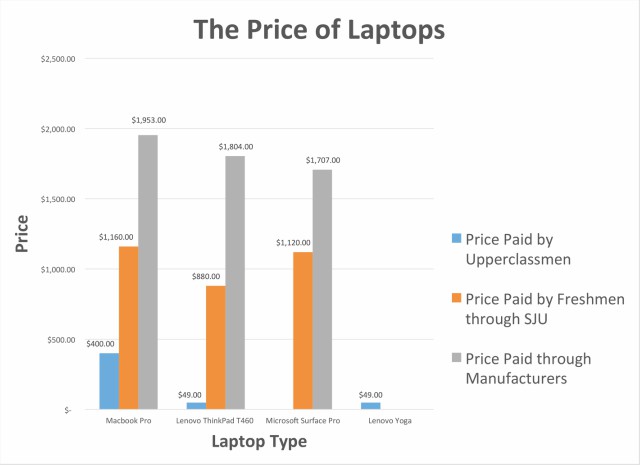 The laptop program offered by St. John’s underwent a dramatic change over the summer, to the surprise of many students.

Freshmen now have to pay a fee every semester to retain their laptop, which will cost them roughly three times more over their college career than what the upperclassmen paid.

Despite the increase, students say that buying a laptop from St. John’s still costs less than buying one from other sources.

Joseph J. Tufano, Vice President for Information Technology, said the University has found through surveys that more students are bringing their own laptops, making the once popular program less of a priority.

“So, when we looked at that, the University said that we would never abandon our students, but because so many students have laptops, we would look at possibly having students help offset the cost of the laptop program,” Tufano said.

While this has come as a surprise to students, Tufano said postcards were sent out to incoming freshmen detailing the laptop program changes.

The University’s website also lists the prices, as well as which academic programs advise which laptops fit them the best.

“I wouldn’t say we did a press release but we put it [the prices] on the screens and everything, we put it on the website…It didn’t say a change but it clearly laid them all out…” Tufano said.

What is surprising to many freshmen is the cost of the laptops for sophomores, juniors, and seniors. Each of these classes only had to pay $400 for a Macbook or a $49 accidental damage fee for a Lenovo Thinkpad.

“Oh my! I didn’t even know that!” freshman Courtney Dixon said. “The reason most people do the laptop, I assume, is to ensure the laptop’s safety, but now I am kind of wondering if it is even worth it.”

“I’m very glad that I decided to bring my own laptop instead,” said freshman Alexis Gaskin. “That’s not fair that I’d have to pay more when the upperclassmen were paying less. It is not worth the money when I could buy my own Macbook for cheaper than a payment plan through the school.”

Some upperclassmen expressed similar opinions on the matter.

“I just don’t understand how we are being provided less and less yet tuition keeps rising,” sophomore Arianna Smith said. “If there was once enough money to provide each student with a laptop where is that money going now?”

Senior Dylan Roake said, “One of the main reasons I liked about St. John’s was they gave me a laptop and provided me with a laptop shop if anything did happen to it. By making the freshman have to pay for their laptops, St. John’s is losing one of their prime recruitment tools.”

There are still reasons to purchase the laptop from the University. Tufano said students pay “about 65 percent” less than the total cost of a laptop because of all the extras included, such as insurance and technical support.

“If you have the University laptop, we can help you with it,” Tufano said. “If you bring your own we can only help you to a certain point. I can’t try to fix it because it is not a St. John’s device and if we break it, we are responsible so to speak…And a lot of people are using, as you know, smart phones and others…The percentages are fairly high of the number of students bringing their own device and that really drove the program…”

Tufano was tight lipped about whether student reaction will lead to more changes to the program.

“There are a lot of students that have opted out and we’ll see what happens,” Tufano said. “We’ll evaluate the numbers, we’ll look at the pricing of the machines and we’ll see what can be offered next year…not many students selected the surface. That was a little bit of a surprise so we’ll have to reevaluate that ‘cause if you’re not taking it, why bother? We might do something else or might make it two options.”

The University website states that included in the laptop program, the Academic Computing Initiative, “the laptops that are part of the ACI program are robust systems that come with preinstalled software designed for the SJU environment. The laptops also have extensive warranty coverage which includes an extended manufacturer warranty for 4 years, as well as 4 years of accidental damage protection.” The programs included are Microsoft Suite and McAfee antivirus software. It does not include programs such as Adobe, Kidspiration, and other programs that will be needed for classes in various majors. These specialized programs are available to students in computer labs and classrooms.

All students are allowed to keep their laptops over breaks and the summer and the laptops become their personal property upon their graduation. The only major difference is the vast price change compared to the price that the previous St. John’s students have had to pay.

According to a survey of 3,853 freshmen and transfer students, conducted by the University in 2015, only 28 percent did not have a laptop before they acquired one from the University.

“Please remember the University is subsidizing this. This is not fully charged to the students. They did not want to put the burden on the students…the President is clear on what we want to do to support our students,” Tufano said. “But with the way everything has changed…if 70 percent of students have their own laptop, why are we buying them another laptop?”