Religion and politics come together for the second presidential debate 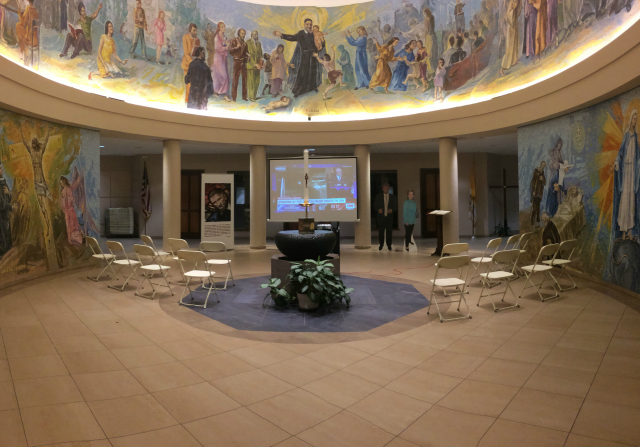 Politics and religion intermingled on Sunday, Oct. 9 with a group of about 20 students that came together at St. Thomas More Church to watch the second presidential debate.

The event is part of the PARTICIPATE 2016 program which is an annual initiative at St. John’s to “promote and increase greater civic awareness, engagement, and participation in the political process,” according to the University’s website.

Victoria O’Keefe, Residence Minister for Social Justice, helped organize the event with “faithful citizen” as the theme of the night.

“Being people of good will [and] being Catholics, we are called to participate in democracy. Our dual heritage is not only being American citizens but also faithful Catholics, and so we just want to create this space to invite people in, be a part of this community and take a live view of the debate.”

The evening began at 6:30 p.m. in the church’s narthex with a game of political jeopardy, which was conducted by Andrew Keith, a student member of Campus Ministry.

When asked why this event was significant to him, Keith said, “I’m very involved in the politics on campus…so I thought it would be a good opportunity to tie in my service faith and my politics.”

A group of six students paired into teams of two to play the game that included questions such as “who was the presidential candidate that won the popular vote, but not the Electoral College vote in 2000?” Two players in particular were avidly answering these questions; while the other players admitted that they didn’t know the answers to most of the questions by giving up a couple of minutes in.

After the game, the discussion portion of the event took place with five more students that joined. A bowl that contained pieces of paper stating Hillary Clinton and Donald Trump’s policies for different issues was passed around between the students. The purpose was to have not just a “safe space,” but also a “brave space,” as O’Keefe put it, in order to analyze whether or not their plans would work.

Topics ranged from Clinton’s plans to change immigration policy to Trump’s strategy to increase jobs. Most of the students were vocal about their views on these topics, with opinions about the plans that sometimes favored them to the ones that were down-right against them, heard throughout the discussion.

Afterwards, a short game of pin-the-tail on the Democratic donkey or Republican elephant ensued in the main entrance of the church leading up to the debate.

Once the seats and the monitor were set, about 10 more students came to watch the debate.

The debate started without Trump and Clinton shaking hands this time around, a foreshadowing of how hostile the rest of the debate turned out to be.

CNN anchor, Anderson Cooper, and ABC News reporter, Martha Raddatz, moderated the debate. Cooper didn’t hesitate to ask Trump about his comments that he made about women, this being the second question of the night. Raddatz asked Clinton about her speeches that were leaked by Wikileaks.

Both moderators tried to keep the presidential candidates focused on the questions that were being asked so that they could answer them in full – a difficult feat throughout the debate.

There were bursts of laughter, shaking and bowing of heads and gasps heard in the crowd of students throughout the night, especially when Trump announced that he wanted to hire a prosecutor once he’s elected; and when Clinton responded to one of Trump’s comments by saying that he just doesn’t want to answer questions about his scandalous tape.

Everyone was on their phones tweeting and snapchatting, as a way to express what was on their minds during the debate.

Junior Savanah Venezuela came to this watch party after going to the Vice Presidential Watch Party on campus on Tuesday, Oct. 4, and had some thoughts about each candidate’s’ performance.

“I think [Trump] kept this cool a little bit better, he wasn’t as aggressive as I’ve seen him in the past,” Venezuela said. “In light of the comments that were said Friday [in the 2005 tape], I don’t think he defended himself as well as he should’ve, I feel like it’s more important than he thinks it is.”

Venezuela continued, “I think [Clinton’s performance] is much of the same as she’s been all along the campaign. It’s unsurprising how she performed today. I feel like she does a better job of responding to actual questions than he does, like he goes and attacks her a lo and she tries to stay on point.”