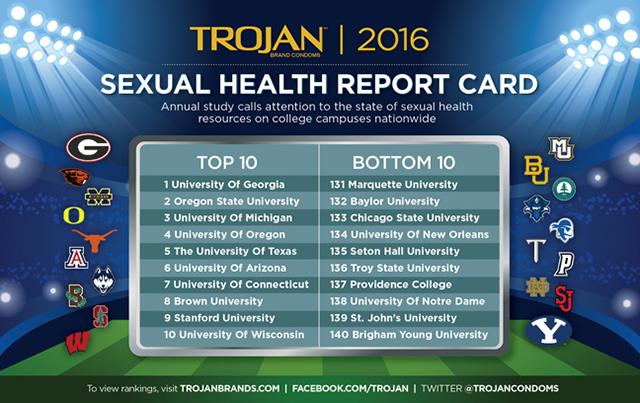 St. John’s second-to-last ranking on the Trojan’s Annual Sexual Health Report Card, which ranks universities based on availability of sexual health resources, was among the subjects of discussion at Monday’s Student Government Inc. (SGI) floor meeting.

Frank Obermeyer, secretary of SGI, said he and another student recently met with Ms. Hanna Artiles-Straver, Director of Violence Prevention, “about sex ed and about the means of sexual health which went really well. Once we build kind of a repertoire of what other schools are doing, hopefully we can announce some changes.”

St. John’s University was ranked 139 out of 140 schools on Trojan’s report, which was released last week. The only school behind St. John’s was Brigham Young University.

At the SGI floor meeting, after Kenneth Shelton Jr. asked SGI if they are aware of the Trojan report, Obermeyer said, “We are 139 out of 140. We actually went down from last year, we were 135. So next year we are going to take BYU down.”

Elizabeth Reilly, the director of Media Relations, responded to the Torch’s inquiry on Trojan’s ranking of the University by saying, “It’s important to note that the Office of Student Wellness and the Student Health Center are available to our students who have any health concerns.”

“While the Student Health Center on campus does not provide clinical testing for any illness, it offers referrals to resources in the community that would be available for our students,” Reilly continued. “In addition, the University is in compliance with all federal and state policies regarding sexual misconduct and consent.”

The Trojan Sexual Health Report Card has been released every year since 2008, and data is analyzed by Sperling’s Best Places, founded by Richard Sperling, a researcher who is commissioned to carry out demographic and preference studies. Sperling’s Best Places describes itself as a website which has been “analyzing data about people and places, and rating them for major publications” with the goal of providing “accurate and up-to-date information, in a useful and entertaining format.”

According to St. John’s online Health and Wellness page, the University requires all incoming freshmen to take a course on “healthy relationships, sexual violence, stalking, and relationship violence” to help students “understand sexual assault and learn about consent.” The school offers student health services including a referral to local healthcare providers and a nurse practitioner available by appointment on weekdays.

Students are in favor of increasing sexual health resources on campus.

“Even in a Catholic school, everyone’s in college, they have to acknowledge the fact that we’re going to have sex,” said freshman Kelly Sullivan. “I think that it would be a good idea to make it more known that [sexual health resources are] available to people. Maybe like a talk on STDs or something like that.”

“I feel like sexual health, even today, it’s kind of a taboo…I feel like we should be educated about it before college, and getting to college we should have education on this. Now that I think about it, I haven’t seen any that many classes or information sessions about sexual health.” said junior Mahbuba Huq.

“I’m sure they know enough but there’s always more to know. They’ll know maybe 50 percent [of what they should], they don’t know the full situation or the risky factors behind sex,” continued Huq. “It’s definitely a health issue because it directly affects your health. Even if we could just get some info sessions out there, or something of that nature, then we can definitely bump ourselves up the list.”