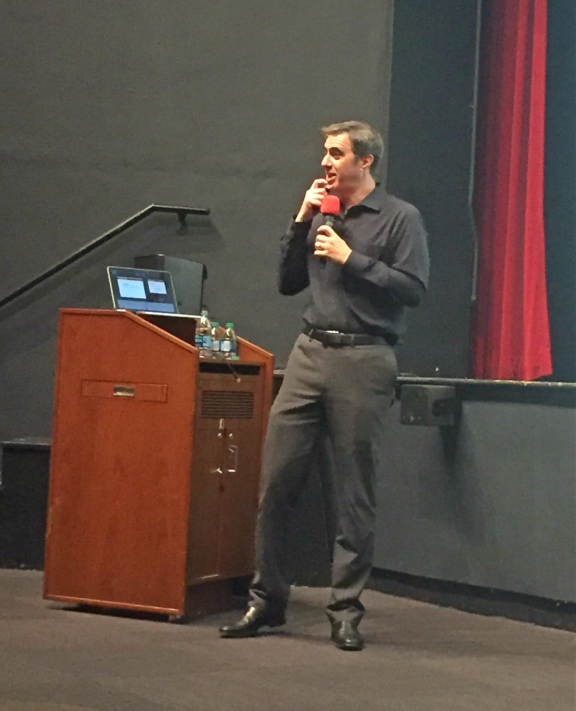 Alan Schwarz, a New York Times investigative journalist, came to talk about his new book "ADHD Nation" at the Little Theater on Oct. 24.

The New York Times journalist, Alan Schwarz, presented a lecture about his book, “ADHD Nation” in the Little Theatre on Oct. 24.

In his book, Schwarz uncovers the frequent misdiagnoses of Attention Deficit Hyperactivity Disorder and Attention Deficit Disorder, or ADHD and ADD, as well as the uninhibited prescription of drugs to treat it such as Adderall and Ritalin.

“It’s so important to bring in an expert in ADHD [who can speak about] its impact on children throughout the country,” Dr. Elissa Brown, Executive Director of the Child HELP Partnership and Professor of Psychology at St. John’s University, said.

Schwarz first addressed the history of ADHD and ADD, and medication used to treat the disorders.

He then went into their widespread misdiagnosis, or what Dr. Keith Connors, so-called “Father of ADHD,” calls a “natural disaster of dangerous proportions.”

Most students agreed with Schwarz’s claim that about 50 percent of diagnoses are false.

“I thought that it was really eye-opening because I have a lot of friends who have been misdiagnosed,” noted Isabel Adamson, a sophomore Psychology major.

Schwarz has interviewed psychiatrists, doctors and teachers who have diagnosed children with ADHD, as well as their families.

Schwarz told the stories of Kristin Parber, who was falsely diagnosed with ADHD, and Jamison Monroe, who faked having ADHD in order to get Adderall and became addicted to it.

While Schwarz placed most of the blame on doctor’s malpractice, he also reserves distaste for “big pharma” companies, whose paid-for expert opinions lead to misinformation surrounding ADHD medications according to Schwarz. These companies use aggressive advertising that essentially tells consumers “Ritalin [will help] the problem child become lovable again,” said Schwarz.

It is important to note that Schwarz never undercuts the validity of ADHD and the medications that treat it, and he even emphasizes this in his lecture by saying, “ADHD is real” and “I am not anti-medication.”

Schwarz’s lecture was punctuated with humor and cultural references.

He played clips from “The Simpsons” and the video “Who Put the Benzedrine in Mrs. Murphy’s Ovaltine.”

“I thought it was a really interesting talk. I didn’t know that ADHD was so misdiagnosed, but I’m also interested in how to ameliorate the situation,” said Ashley Hicks, graduate student in Psychology.

For the most part, the lecture left a positive effect on everyone who took part, including Alan Schwarz.

“It was nice to come [to St. John’s] because I have always wanted to be a teacher,” Schwarz said.