The logo of Feminists Unite.

A group of about 20 students that call themselves Feminists Unite (F.U.) say they are seeking official status from Student Government Inc. (SGI) for the second straight year to provide a space on campus for education and discussion centered on feminism and gender equality.

Junior Stephanie Aliaga said she started the group and began holding meetings about one year ago due in part to the encouragement of her theology professor, Dr. Erin Kidd. Aliaga says she’s currently F.U.’s acting president.

“In conversations with Stephanie about feminist activism, she mentioned disappointment that there was not a group on campus dedicated to working for justice with respect to issues of gender,” Dr. Kidd wrote in an email to the Torch. “I encouraged her to start the kind of group that she would like to see on campus.”

Aliaga said F.U. didn’t make it past the first stage of SGI’s Power to Organize process last year, which offers students an avenue to create organizations. The group recently re-applied through the same process, she said.

However, the group continues to meet, holding meetings, events and creating projects such as “Beautiful Body,” an ongoing campaign which F.U. describes as a “body positivity and self-love campaign” consisting of photos of students with accompanying text describing their experiences on the topic.

“I do think that the fact that F.U. has an active membership, and has hosted a number successful events, demonstrates that there is a desire on campus to see issues of gender-based injustice more fully addressed.” Dr. Kidd said.

Vice President Megan Solomon said the main purpose of F.U. is to “create a space for open discussion and sharing, a place where all of us can come to terms with the ways that we’ve encountered oppression in our lives, whether that’s race, gender…and we’re trying to do all that through an intersectional lens.”

The structure of each meeting includes presentations on various topics within feminism as well as discussions. F.U.’s meeting on Oct. 20 consisted of a presentation on the relationship between pop culture and feminism, while the preceding one included a discussion about sexual health and contraception availability on campus.

F.U. secretary, Yovanna Roa-Reyes, is one of the forces behind an effort to bolster sexual health education on campus. Reyes is also involved in SGI, where she says she found support for the issue.

A recent study released by Trojan ranked SJU as 139 out of 140 schools, placing the University among the worst in on-campus sexual health resources, including the availability and distribution of free contraception and STI testing.

The ranking was discussed during an Oct. 17 SGI meeting, where Obermeyer, now the secretary of SGI, said he had met with the Director of Violence Prevention, Hannah Artiles-Stravers, and discussed sexual health and education.

“Once we build kind of a repertoire of what other schools are doing, hopefully we can announce some changes,” Obermeyer said during the meeting.

SJU’s Director of Media Relations, Elizabeth Reilly, previously told the Torch that while the University does not provide on-campus clinical testing, the Student Health Center offers students “referrals to resources in the community,” and that the University “is in compliance with all federal and state policies regarding sexual misconduct and consent.”

“I feel like the online course [Haven, a requirement for all incoming freshmen to take] covers sexual assault, but outside of that, it’s like, you don’t really talk about contraception or anything,” said Angelique Leacock, a member of F.U.

“It’s not something that’s talked about. I feel like the fact that [F.U.] has been around, and I’m a senior, and I didn’t know about it…I think they’re not really promoting the things that they should be promoting,” Leacock.

In a recent email exchange, Obermeyer told the Torch, “This is a challenge that Yovanna and I began in March of this year. We have recently taken it back up and have been mostly working to compile data on what sexual health services and information are offered at our peer schools; this includes schools like DePaul University, Fordham University and Niagara University.”

“We have also been working with advisors to build a convincing argument that sexual health is an integral part of a student’s overall wellness, and thus cannot be overlooked,” Obermeyer continued. “Once we build a strong base of information, we will meet with administration to see what ways we can meet these challenges. We look to push for any resource on campus that would benefit the overall health of St. John’s students.” 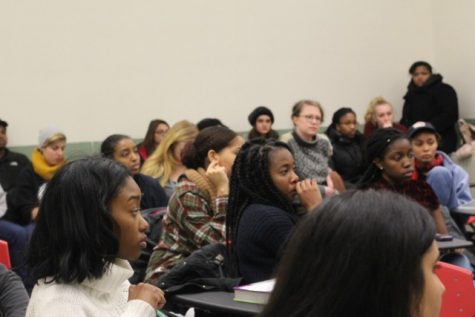 PHOTO PROVIDED BY/BRITTANY JOSEPHINA Feminist Unite members during a presentation on “The Sexualization of Women in the Media/Porn.”

President Stephanie Aliaga says that F.U. supports the cause, although their status as an unofficial organization hinders their participation in the sexual health initiative. The organization also supports the University improving availability of feminine products throughout campus.

“F.U. endorses the efforts to expand sexual health awareness, we’re just waiting to be official…it’s just really difficult because we’re not official. In the beginning, we were just doing underground work, [we would] go into empty classrooms for meetings and get kicked out, and then go to another classroom,” Aliaga said.

F.U. now reserves its meeting rooms through the Women’s and Gender Studies department; as a result, their meeting schedule is dependent on when a room can be secured. In the past, F.U. attempted to advertise events by hanging up flyers throughout campus, but they were promptly removed because of the organization’s unofficial status. Aliaga says that members are now informed of upcoming meetings and events through F.U.’s Instagram account.

The group has applied through Power to Organize to become recognized by SGI each year since their founding. They did not make it through the second round of presentations last year, and received an email from the SGI Organizations Committee informing Aliaga that another group, Women’s Empowerment (W.E.), made it to the next stage instead.

The email, sent late October of 2015, stated, “There was another organization applying through the Power to Organize process with identical goals. After long deliberation, the other organization showed to be a better fit for SJU.”

“We currently do not have an organization to represent the needs of women on this campus. We do feel that there is a very deep need,” it continued.

Women’s Empowerment ultimately did not make it through the second stage of deliberations, and was therefore not approved as an official organization.

F.U. has submitted their application to SGI for this year and presented their organization this past Saturday, and, according to Aliaga, will receive a response within the next few weeks.

Miuccio continued, “I think Feminists Unite’s mission, and passion in particular, is important and if granted approval by the SGI floor, they will have a positive impact on the SJU community!”

Aliaga said that she looks forward to F.U. becoming an official organization, as this will make it possible to hold more educational events and become more active.

“Besides the sex education initiative and feminine products in bathrooms, we want the school to feel less threatened by the word ‘feminist’ and the stigma that comes with it. [F.U. is] a place where everyone can come together and create, support, educate and advocate for gender equality,” said Aliaga. “I think this is necessary on campus and the club will last for a long time because feminism is always changing and there’s so many topics [within it] to learn.”