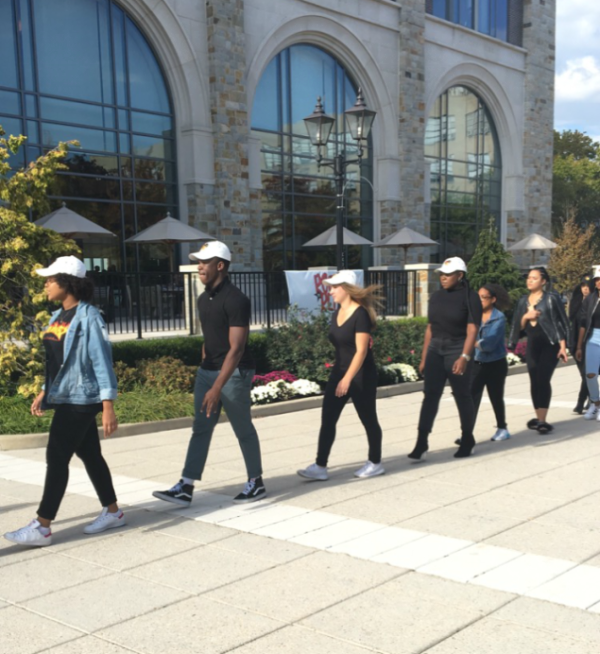 Red House members marched from Lourdes Hall to DAC in a straight line of all-black and white caps.

The Red House members organized a flash mob on Monday during common hour to promote their upcoming events. Students in the Red House formed a circle in front of the D’Angelo Center and struck a pose.

The president of the Red House, Vachon Osby, crouched in the center of the circle with a piece of chalk in his hand. He wrote, “10/25: Pop-Up Shop” in large letters.

The students in the flash mob all wore black, with white and black baseball caps. They marched towards the D’Angelo Center in sync, while students and faculty yielded the procession.

“This flash mob is supposed to be very editorial, to get everyone’s attention,” explained Osby, a senior at St. John’s University.

“People are going to be looking at everyone in the circle and not notice me, but when they move, they will see the dates for our pop-up shop in the center,” Osby continued.

The Red House’s members will showcase local fashion designers in the fall fashion show next month. 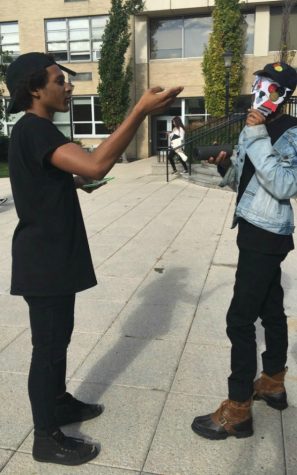 At the pop-up shop on Tuesday, Oct. 25, the Red House sold the baseball caps worn by the flash mob participants as well as T-shirts designed with the Red House’s three-button logo.

“Because we focus on visual creativity, we wanted this flash mob to be mainly visual,” said Zam Cole, a junior at St. John’s and vice president of the Red House. “We want people to see what we’re doing and what we’re going to do on campus.”

People walking by the D’Angelo Center stopped in their tracks to view the spectacle. Some students took out their phones to record the flash mob. However, other students looked confused.

“At first, I thought they were doing a music video or something,” said Kash Morawakkolarage, a junior at St. John’s. “But then I realized it was the fashion club.”

Osby thinks that there will be a better turnout at the fall fashion show because they did the flash mob. He says the Red House will continue to promote themselves in interesting ways to encourage creative students on campus to join the organization.

The Red House will hold both a fall and spring fashion show on St. John’s Queens Campus. They will also have networking events and fashion panels throughout the year for interested students and faculty.

Editor’s note: A quote was removed from the original version of this story, after the person who was quoted said they were not aware that they were speaking with a reporter.