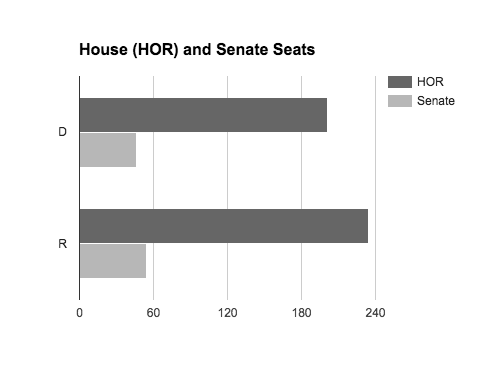 The graph shows the number of seats held by Republicans and Democrats in the House of Representatives and Senate.

While the majority of recent media focus has centered on the presidential election, there are several important senatorial races occurring around the country that will have a large impact on how our new president will be able to govern.

Currently, Republicans hold a majority of the seats in both houses of Congress. For this reason, many of President Obama’s initiatives have failed, since he does not have the support of Congress. Additionally, former Supreme Court Justice Antonin Scalia’s seat, who passed away earlier this year, is still empty, as Republicans have vowed to not approve any of Obama’s nominees.

Republicans currently have a slim 54-46 majority in the Senate and a more substantial 234-201 advantage in the House of Representatives. There are 24 Republican seats up for contention, compared to 10 for Democrats.

However, only 9 Democratic seats are actually competitive, as California’s senatorial candidates are both Democrats.

In the Senate, there are some specific races to look out for. Any loss for Republicans leads them closer to losing control of the chamber.
In Arizona, incumbent Sen. John McCain (R) is looking for reelection and is running against Rep. Ann Kirkpatrick (D).
In Florida, incumbent Sen. Marco Rubio (R) is running against Rep. Patrick Murphy (D). Rubio re-entered the race for senator after his failed bid for president.
In Illinois, incumbent Sen. Mark Kirk (R) and Rep. Tammy Duckworth (D) are vying for President Obama’s former senate seat that Kirk won in a 2010 upset.
In New Hampshire, Sen. Kelly Ayotte (R) is running against current Gov. Maggie Hassan (D). Both women are well liked in the state.
In Nevada, Senate Minority Leader Harry Reid (D) is retiring, and there’s a tight battle between former Nevada Attorney General Catherine Cortez-Masto (D) and Rep. Joe Heck (R) to claim the seat.