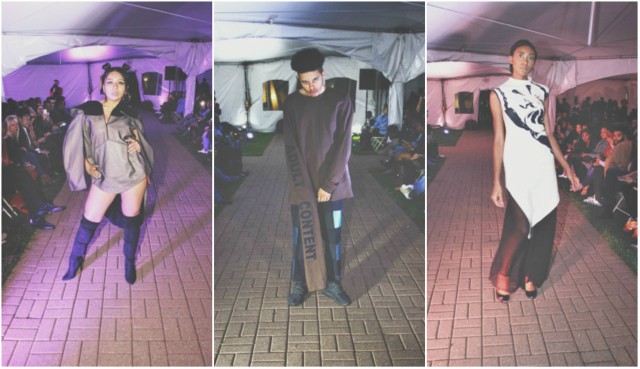 St. John’s most creative and fashionable gathered Friday evening on Nov. 4 for The Red House’s 10th annual fashion show. The show, which was a $5 fee at the door, called “Rebirth,” presented three different designers and one in-house collection created by the executive board – specifically their President Vachon Osby and Vice President Zamarin Cole.

Rebirth got its name due to the absence of last year’s fashion show and the revival of The Red House’s new image that Osby created.

Front row were reserved seats where you could catch a glimpse of the organization’s advisor and professor, Dr. Andrea Licari, and men’s lifestyle blogger, Igee Okafor. Students in attendance came in their best outfits, eager to see what Red House had to present to their audience.

“It’s really cool that I was able to bring all these different media forms of art together,” said Osby. “Everyone is kind of just vibing out. I am excited.”

Osby reached out to performers and designers outside of St. John’s in order to bring new

The show started off with Voices of Victory, setting an angelic, gospel atmosphere. This was meant to be a metaphor to the fashion show’s theme of rebirth as the show opened.

Along with Voices of Victory there were other performances throughout the night, such as a poem sung by Laura Jeanne also known as Faye.

The first collection was a mixture of street and modern hip hop. The designer, Boddy Day, has a fresh outlook on taking the streets to the runway.

Models were seen holding chains and poles as their accessories. The stylist was junior and advertising major Benjamin Achilles, who was enthusiastic about his first show for the Red House.

The next designer, Jackii Ramis, had her models gracefully walk the runway with a mix of insects and silky pieces. The last designer was Frances Metzger a student at FIT with a girly vibe of modern-looking pieces.

All designers were reached out to by Osby, as he invited them out to showcase their work at this show.

After the three top designers showcased their work, the executive board walked out in their own pieces, with Melanie Burton, social media chair and marketing major, and Cole, wearing Cole’s pieces. Sophomore Cruzer Santana took hold of the night as he rapped, hyping the audience up, as each board member walked down the runway.

“Rihanna was my main inspiration,” said Cole. “Her collaboration with Puma, establishing, the Fenty brand opened my eyes to what I could do.”

In the show, there were 20 models all who had tried out previously and got the job to model for their first time Red House fashion show. The fashion show featured models of all shapes and sizes, showing a great amount of diversity.

“The show is going to give me great opportunity to explore my talent and get to know new people,” Freshman Sukhminder Singh, who model at the show, said.

It was a night of fashion, art and socializing. Students enjoyed their friends’ company and gathered to get their photos taken from the photographers after the show.