Elliott spoke about her lessons such as “the myth of race,” “Blue Eyes/Brown Eyes” 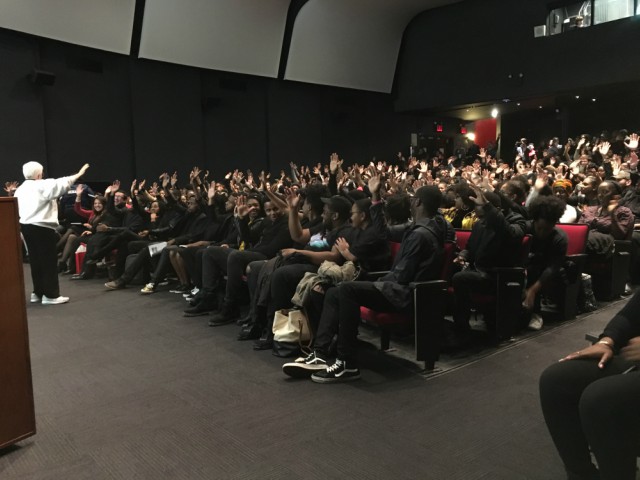 Noted anti-racism activist and educator Jane Elliott spoke to a crowd of more than 400 students, according to Ebony Calvin, Associate Director of Campus Activities, at the Little Theatre as part of the University’s Academic Lecture Series on Nov. 7.

The lecture was organized in collaboration with Student Development, Student Government Inc. (SGI) and Haraya whose focus is “to facilitate events that will uplift, enlighten and educate the St. John’s University community, in turn creating an outlet for students to reach out to administration,” according to its official OrgSync website.

In 1968, Elliott was a third grade teacher who rose to prominence after conducting her “Blue Eyes/Brown Eyes” exercise as a direct response to the assassination of Martin Luther King Jr., which is the focus of ABC’s documentary “Eye of the Storm”, released in 1970.

She hoped that by dividing her all-white classroom based on eye color, she could show her students “what it is like to walk in the moccasins of African-Americans in the United States,” according to Elliott. She sparked controversy in her methodology, as well as an enduring international conversation about racism.

“I’ve been doing this work for 48 years and I should never have had to do it at all, but I certainly shouldn’t have had to be doing it 48 years later,” Elliot said in her opening remarks. “This is insane.”

“I wanted to hear her speak on what she has to say on issues that are going on in our country right now, and all those issues that she had dealt with in the past,” Katherine Daniels, a junior at St. John’s, said.

Daniels learned about Elliott from viral videos of her activism.

Elliott spoke on the 500-year history of the concept of race itself, referring to it as “the myth of race,” and urged students to be a part of ending its widespread acceptance. “There is only one race on the face of the earth, it’s called the human race,” she said.

Throughout the roughly one hour-and-a-half lecture, Elliott encouraged students’ active participation by asking the audience questions and taking volunteers for activities.

In one activity, Elliott illustrated the geographical errors in the Mercator projection, a widely used map in schools across the nation. This map depicts North America and Europe both as the center of the world map and as larger than their true sizes, with other continents portrayed as significantly smaller. She maintained that in using the map as a teaching method, schools are misleading students.

Elliott referenced then-presidential candidate and current president-elect Donald Trump a few times throughout the evening, and suggested that his ability to run as a serious candidate hinges on the fear of white Americans being a minority in the near future.

“You need to realize that we are living in dangerous times right now, because of white fear. We’ve got to create a present that will make the future better,” Elliot told the audience as she encouraged students to vote. “‘Black Lives Matter’ is the most important thing to have happened on this continent since Martin Luther King Jr.”

Elliott addressed her famous “Blue Eyes/Brown Eyes” exercise and gave the audience details on her experience in conducting such a radical social experiment in her hometown of Riceville, Ind. She spoke about the marked differences in her third grade students’ behavior once one group was emboldened for having blue eyes and the other demeaned for their brown ones. Brown-eyed students who had excelled in their schoolwork just prior to the exercise performed poorly that day, while blue-eyed students who had learning difficulties seemed to excel. Elliott remarked that one child in particular, who once had severe issues with spelling, received a perfect score on his spelling quiz.

Elliott thanked the audience for being one of her best thus far. Following the lecture, “Eye of the Storm” was screened for remaining audience members who wished to see the documentary on Elliott’s exercise. 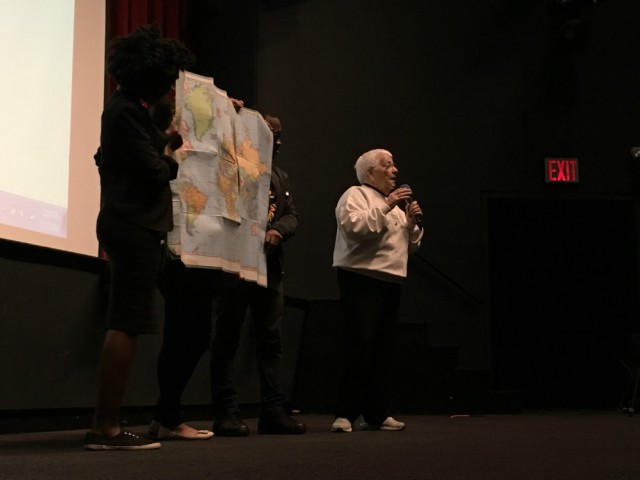 “I definitely did learn more about the historical context behind racism, like with the map, that’s something I would never ever learn otherwise…I think we’re just kind of ingrained to follow and listen to whatever we’re taught, even if it is untrue or incorrect or biased,” Essence Walden, a freshman at St. John’s, said. “So [Elliot] makes you want to be more aware and more observant of what we’re being taught, and look at it from different perspectives and who’s teaching it.”

“They’re tired of the nonsense; they know we’ve been lying to them,” said Elliott in a conversation with the Torch on why she considers college-aged people to be more receptive to her lectures.

“All college students have to learn, [what is] engraved on this shirt, number one: Prejudice is an emotional commitment to ignorance,” Elliot said. “They have to read the Frederick Douglass quote that says, ‘if there is no struggle, there is no progress…’ They’ve got to learn it, and they’ve got to practice it.”

Elliot continues to say that students should appreciate the individuals that are working against racism to make a change.

Following the lecture and screening, Elliott was invited to attend the Black Solidarity Day March hosted by Haraya. However, Elliott was only able to stay for dinner.

Haraya’s President Ricardine Laventure, senior and International Communications and French major, said that they chose to invite Elliott to St. John’s after a summer of a resurgence of police brutality and killings of African Americans.

“We felt it would be a really good idea to bring somebody in whose very well versed in diversity and race and overall just a very good educator,” Laventure said. “Bringing her was a really special experience for us…I personally really admire her work so it’s good to see even in her age she’s still willing to come to campus and, you know, really welcome us and embrace us cause she stayed after her speech. It was a really great experience.”