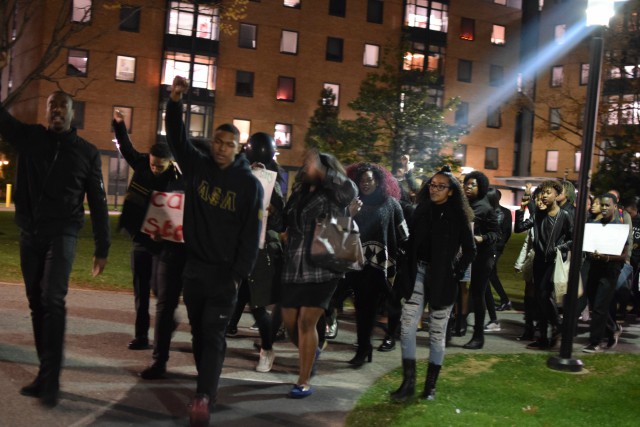 It’s a time for healing and a time for action, some students say. Following last Tuesday’s presidential election, students across campus organized events for their peers to discuss its outcome.

From marches to protests to uncomfortable classroom discussions, the overwhelming theme of these events is coping.

For many students, the election of Donald Trump to the presidency was shocking in ways that extend far beyond the history of it all. His election feels personal, and not in a good way, according to several students and student groups around campus.

The reaction has been tense, but at the same time, overwhelmingly nonviolent.

The University in a statement said, “There were a few isolated matters that Public Safety handled regarding signs displayed, and in written messages in the residence village that were removed due to inappropriate language. We do not prohibit freedom of speech at St. John’s University but do prohibit the use of any foul and inappropriate language.”

“We will continue to focus our efforts to be a more welcoming and respectful community. We reiterate our commitment to our University core values of truth, love, and respect so I ask that we continue to respect each other, even those with opinions and views different from our own,” the emailed statement said. “Any form of intolerance or intimidation has no place in our University community. We must be compassionate and understanding towards members of our community who are concerned or may feel threatened by the outcome of the presidential election.”

Through their actions, students followed suit.

Last Thursday night, the Latin American Student Organization (LASO), held an event in a classroom in Marillac. A safe space, they called it, for students to discuss their feelings following the election. Students set up the desks in a circle, making it easier for them to see one another as they spoke.

“Please–tensions are high, people are afraid, scared–but feel free to express yourselves freely, in this room,” Esteban Acosta, LASO’s vice-president, said at the start of the night. “Respect each other’s opinions, because we all have different opinions on the issue, and let’s just have this event.”

About 35 people were in attendance, including Dr. Meghan Clark of the Theology Department, who said she was attending to show faculty support for students. The ebb and flow of the conversation shifted between students’ views of the election, and personal stories. Twins Maria and Cristina Villon shared their story of recently becoming citizens in the United States.

Tearing up, Cristina began the story, prompting the room to erupt into congratulatory claps.

Her sister talked about their mother’s fear of being separated, despite the family’s recent citizenship.

“Her mentality, that she thinks that we can be separated, broke our hearts,” Maria said.

Other students shared stories that echoed the Villon’s, as they spoke about their own family’s fears and hopes going forward.

“And how do you move forward, and how do you find your place in a space where there’s also people who aren’t supporting your struggle, how are you going to shift it in a positive way?” Lozano, LASO’s Co-Public Relations Chair, asked.

Safe space events aren’t the only thing students are organizing, though. On Saturday afternoon, sophomore Kenneth Shelton Jr. helped organize a group of students to march to Trump Tower in Midtown.

“Me, all my friends, all my family members are here today because we want to send a message that we’re not going to stand for the racism, the misogyny, the transphobia and the sexism that’s going on in America,” he said at the march. “America’s better than that.”

Students, along with other protesters, marched from Union Square Park to Trump Tower on 5th Avenue. Thousands attended, including acclaimed documentary maker Michael Moore. Interestingly enough, the march’s starting point is where New Yorkers have been hanging Post-It notes with messages of love and peace on the walls of the Union Square subway station.

Overall, students showed immense pride in the unification that formed.

“I am so proud that this many people of so many different backgrounds, races, religions and sexualities can come together and protest, fight for our rights, which a xenophobic, sexist and racist presidential elect, and his vice presidential elect wants to take away from us,” sophomore Sabrina Matis, said. “This march gave me hope again after the terror of this election.”

“It’s important to participate in events as such for a few reasons, the first being, it’s in many ways therapeutic to be surrounded by people who share similar values, but more importantly, it’s important as an individual and group to assure we don’t normalize discrimination, be that sexism, racism, homophobia or transphobia,” said junior Mikayla Torres.

LASO’s event was just one of many that student organizations would hold on campus.

SJU’s NAACP chapter held a separate event in the D’Angelo Center on Monday called “State of Emergency.” Students were invited to discuss topics of concern relating to the election during the event on Monday.

“I think that the event was incredibly important for healing on our campus,” said Tembe Denton-Hurst, who participated in Tuesday’s event. “A lot of us are left feeling fragmented and unsafe and I think it’s crucial that we’re able to engage with each other on the things that matter to us. This election has left a lot of us wondering where we fit in, where we go from here, how do we make a change and tonight gave us the opportunity to figure some of these things out.”

The room was split into three groups: agree, disagree and in-between. Several questions were asked about Trump’s proposed policies and stances. They included questions about Trump’s stance on regulating student loans, his views on law enforcement, and LGBT and abortion rights.

Depending on how students felt about the questions, they would move to the agree, disagree or in-between side.

“Everyone has something to say and it’s all different, yet similar in a sense. We all felt a sense of fear, anger, confusion, sadness or relief that now this election process is over. To pinpoint a specific subject we talked about the most is difficult,” junior William Gill, who attended, said. “But I think it would be how the election [affected] all of us. For most, it’s on how we feel on our government’s role, and how our politicians ‘failed us.’”

On Tuesday evening, another protest took place, but this time, on the St. John’s campus.

Student organizations collaborated to form a “Love March.” About 100 students marched, coming together on the Great Lawn at the end to speak their thoughts on the election.

“We all know why we’re here given these troubling times post-election, but honestly thank you because as we look around, we know that we have allies in this crowd. And for the people that couldn’t make it, they’re with us as well,” said senior Miguel Vazquez. “The whole point of this march is, throughout all the jargon that’s full of hate and negativity, that we stand together representing ourselves, representing marginalized groups, and the efforts of promoting peace, love, and not equality but equity for all of those people.”

Some of the chants included “No justice, no peace! Our fight will never cease!” and “No hate, no fear, all people are welcome here!”

They continued to walk, refusing to acknowledge the shouting. But that doesn’t mean that it didn’t bother some students.

“I felt a little uncomfortable, because I saw a lot of people watching and maybe saying some degrading things,” graduate student Jordan Nichols said. “But it felt good at the end of the day to be able to protest.”

The organizations  were also joined by faculty Tuesday night, who voiced support for the students.

“I was really glad to join in the chanting with people, I’ve never been to the dorms before so I liked seeing people going to the windows and waving, I just felt a different perspective on campus,” said English professor Lee Ann Brown. “I felt the energy of people coming together.”