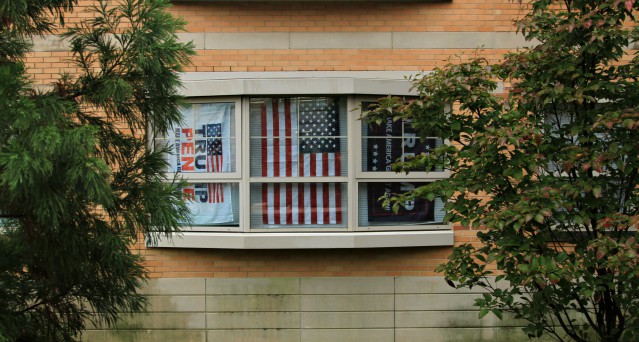 The students in a Century Hall suite have put up their flags supporting President-elect Donald Trump since his victory on Nov. 9, causing controversy on campus.

A group of St. John’s students in Century Hall is receiving backlash for demonstrating support for President-elect Donald Trump on their dorm window.

An image of the window, which has made waves on Twitter, shows a Trump and Mike Pence flag on the left, the U.S. flag in the middle and another Trump flag sporting his campaign motto, “Make America Great Again,” on the right.

The five students living in the suite, who spoke on the condition of anonymity because they are concerned for their safety, believe that hanging their flags in support of Trump is their constitutional right.

One of the students said they have had these flags on display in their common room since classes started, however once Trump won they chose to put them on the window in celebration.

“We never thought it would be controversial, since people hang things in their windows all the time,” one of the students said. “It is harmless, we are expressing our freedom of speech.”

Four out of five students living in the dorm support Trump. One said he supports Trump because he was raised Republican and agrees with whomever the party nominates. Someone else said they backed Trump because they are tired of the U.S. being “so politically correct.”

Another one said, “I support Trump because we believe that he will get this country back on its feet. He is not a politician, but he does know what he is doing, especially when it comes to the economy.”

The suitemate who didn’t vote for Trump said, “I actually voted for Hillary [Clinton], but I don’t see anything wrong with the flags. I think it is absurd that people are going out of their way to comment on social media and harass us.”

The students admit they have received a lot of hate directed at their room since the flags have been up, including Snapchat stories, tweets accusing them of being a part of the KKK and people yelling profanities outside their door and window. 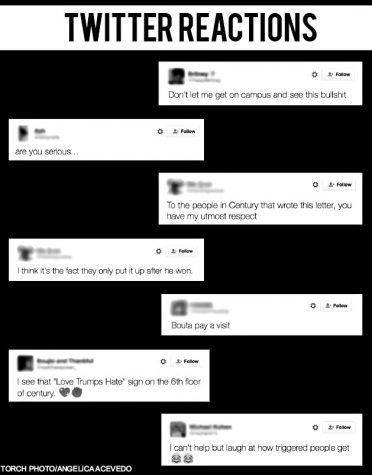 Over the weekend they received a letter taped on their door written by other Century Hall residents that requested they take down the flag, citing the University’s code of conduct. In the letter the other residents state in bold that these students are “creating a hostile environment.”

This controversy has caught the attention of the conservative news outlet National Review, as well as Fox News.

In a statement to the Torch, University spokeswoman Elizabeth Reilly said, “We do not prohibit freedom of speech at St. John’s University but do prohibit the use of any foul and inappropriate language.”

The students say they intend to keep the flags up despite the request from their fellow Century Hall residents.

“The letter is completely hypocritical,” one of the students said. “They are the ones creating the hostile environment by taking action against our room. We are being respectful; we have never acknowledged the protesters, who are still being disruptive. We kindly ask everyone to focus their negativity toward the election elsewhere. This should be a non-issue.”

The students also provided The Torch with a second letter they have received. This one, which purports to be from an anonymous Century Hall resident, applauds the five students not for who they are “backing,” but because they are defending their right to freedom of speech.

The students don’t believe they are doing anything wrong with the flags.

“We would have taken the flags down after Thanksgiving,” one of the students said. “We decided to just keep them up, and honestly, the hate doesn’t phase us at all.”

In response to the flags, some other suites in Century have displayed their political views – including more Trump flags, a President Barack Obama poster, a gay pride flag and a love trumps hate sign.

Sophomores Abby Murray, Itzel Hurtado and Emily Fisher, who live in the suite with the “love trumps hate” sign, believe the five students haven’t owned up to their beliefs because they did not publicly express their support for the Republican nominee until after Trump won.

In a statement to the Torch, those three students said, “We were upset by the outcome of the election, and even more upset that people have been using this as an excuse to be hateful and cruel to people across the country … We want to help [people] not feel discouraged and know that there are people fighting alongside them and standing with them.”

On Friday, Nov. 11, President Conrado “Bobby” Gempesaw, Ph.D., sent an email to the St. John’s community reminding them that the University will “continue to focus our efforts to be a more welcoming and respectful community.”

“We reiterate our commitment to our University core values of truth, love, and respect so I ask that we continue to respect each other, even those with opinions and views different from our own,” Gempesaw said. “Any form of intolerance or intimidation has no place in our University community.”