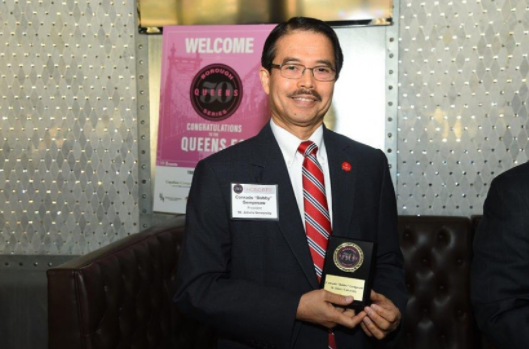 Students and faculty aren’t the only ones who shine in varying aspects at St. John’s University – the University’s president Conrado “Bobby” Gempesaw, Ph.D. was given his own moment to shine as he was named to the Queens Power 50 list at number six.

The Queens Power 50 list is an annual series, published by a government, politics and business publication called City and State New York, that highlights organizers, activists, business and higher education leaders who positively impact the neighborhoods and borough in which they live and work.

The list acknowledges St. John’s as the third-largest Catholic institution in the nation with more than 20,000 students and an impact far exceeding the University’s Vincentian mission, now driven by Gempesaw.

“The hiring of Conrado ‘Bobby’ Gempesaw in 2014 signaled a shift in the history of the university. He is the first professional educator and layperson to run the institution, focusing heavily on improving the educational environment for students as well as expanding on partnerships with the community and abroad,” City and State wrote. “The campus is an anchor of economic development in the heart of the borough, and Gempesaw has made integration of the campus and the community a key part of his vision for the school.”

Dr. Gempesaw came in on the list close behind Dennis Walcott, CEO and President of the Queens Library; Hector Figeroa, President of 32BJ; Lysa Scully, General Manager of LaGuardia Airport; Anne Marie Anzalone, Chief of Staff at Rep. Joe Crowley’s Office and Carl Mattone, President of the Mattone Group, according to City and State.

In a statement to the Torch, Dr. Gempesaw said, “Being named to the City and State Queens Power 50 list is an honor and recognition, not of any single individual, but of the impact and significant role of St. John’s University in our borough and beyond. The true measure of the impact of St. John’s is found in what we all do to ensure student success and to expand our community and global partnerships.”

Some students expressed their support for Dr. Gempesaw’s recognition.

“I think that’s awesome that our school has someone we can recognize as a leader for Queens,” Caroline Stoughton, a freshman fine arts major, said.

Sophomore History and Italian major, Annamaria Basile, believes this is a great achievement but there is still work to be done, “I haven’t heard of this award before but it is very cool for President Gempesaw.”

At the “Power Panel” breakfast event held at the Raven Hotel in Long Island City on Tuesday, Nov. 1, Dr. Gempesaw was able to participate in a discussion along with Figeroa, Walcott, Carol Conslato, the Director of Regional and Community Affairs for Con Edison and Patrick Jenkins, the President of Patrick B. Jenkins & Associates, with remarks from Congressman Joseph Crowley, according to the City and State article.

He shared his thoughts on how “Strategic Priority 4: Expand global and community partnerships,” is related to the ongoing Vincentian mission St. John’s prides itself on, in order to make a difference outside of the campus gates.

Brian Browne, Executive Director University Relations & Assistant Vice President for Government Relations, attended the breakfast event and stated, “Since arriving at St. John’s, Dr. Gempesaw has advocated for and cultivated the expansion of community and global partnerships as part of the University’s Strategic Priorities. Dr. Gempesaw being recognized by City and State is testimony that the successes of our Strategic Priorities are moving beyond the confines of the campus gates.”

Sophomore accounting major Lissy Licata feels Gempesaw’s honor was very much earned, “I’m very proud of Bobby I think he’s one of the greatest presidents St. John’s has ever had, he’s fun and very interactive and I’m proud he represents our school.”