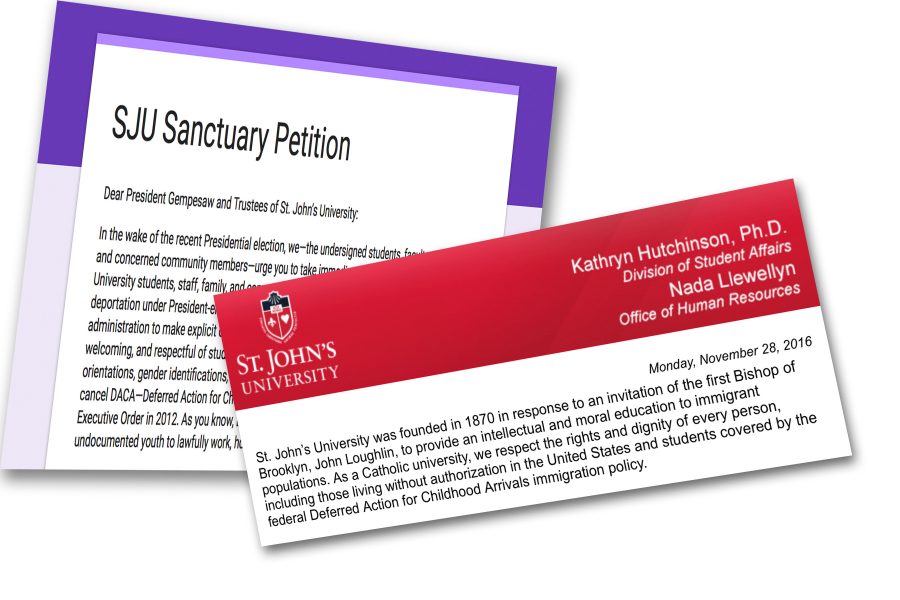 “The University will continue to support all our students—both documented and not—as full members of the St. John’s community,” the email said.

The email, from Kathryn Hutchinson of Student Affairs and Nada Llewellyn of Human Resources, arrived in inboxes at 5:56 p.m. Monday, hours after the University received a faculty-driven petition that implored St. John’s to protect university members who could face deportation if Trump’s stated policies come to fruition.

The petition, which is available online through a Google form, calls “on the University administration to make explicit our commitment to creating a campus that is supportive, welcoming, and respectful of students of different religious backgrounds, racial identities, sexual orientations, gender identifications, and immigration statuses.”

As of Tuesday night, the petition had 428 signatures from students, faculty and alumni, most of whom posted their names and connections to the University. The petition was delivered to the office of the president on Monday during common hour. English professor Gabriel Brownstein, one of the three professors who delivered it, said they were “very gracious in receiving us.”

“The petition is part of a national movement – universities across the country are standing up for the members of their communities,” Brownstein said in an email to the Torch. “So it’s not really about any one person, or even a group of people, who started it – hundreds of people have signed it.”

There is a nationwide movement that urges protection for undocumented and immigrant students on college campuses, especially those who have been protected since 2012 by the federal Deferred Action for Childhood Arrivals program.

Commonly referred to as DACA, the program protects students who were brought to the country illegally, are under the age of 31 and do not have a criminal record.

University President Dr. Conrado “Bobby” Gempesaw is one of about 400 college and university presidents who have signed a statement urging civic, religious, business and nonprofit leaders to join in supporting DACA students.

“This is both a moral imperative and a national necessity,” the statement said. “America needs talent – and these students, who have been raised and educated in the United States, are already part of our national community.

They represent what is best about America, and as scholars and leaders they are essential to the future.”

The professors who spearheaded the St. John’s petition say they are comforted by the similarities they see in their petition and the statement Gempesaw signed.

“We see our petition as acting in solidarity with our university president and his position on sanctuary as an institutional commitment to protect these students,” said Dr. Elda Tsou, an English professor.

The petition requests that the University take action on 10 points, such as:

Ensure that the identities of undocumented members of the community are protected.

Invest in faculty and staff training to support undocumented students, among other things.

In the email sent Monday by the University, the offices of Human Resources and Student Affairs announced the creation of two panels. One is designed for faculty and staff “that provides strategies on how to address immigration-related concerns raised by students.”

The other is a panel for students “addressing immigration-related concerns.”

In the weeks following the presidential election, faculty have been instrumental in aiding students who have voiced concern. Some of these actions include attending discussions and joining the on-campus “Love March” two weeks ago.

According to Tsou, the petition was put together by two faculty groups: faculty of color, and allied factory from departments spanning the campus.

“In the wake of the election and in light of the campaign promises made by the incoming administration…both faculty groups are extremely concerned about how these changes will affect the most vulnerable students in the St. John’s community,” Tsou said in an email.

The language of the petition reflects this sentiment. “As an immigrant-serving institution deeply committed to social justice, St. John’s has historically admitted both undocumented and DACA students,” the petition states. “What will happen to them when DACA is canceled and they fall out of status?”

According to Dr. Kathleen Lubey, another professor who assisted with forming the petition, this is a fear that some students have.

Lubey said she devoted her classes to discussing the outcome of the election, and the potential effect it could have on students, as well as their families.

“My students were openly emotional, distressed, and extremely worried about themselves, their peers and their loved ones – they were in no state to focus on academic work,” she told the Torch.

Lubey added that they saw the petition as “an opportunity to convey to administration and to students that faculty will do all we can to restore a sense of safety to their educational environment.”

She said that the group believes the requests in the petition are in line with the mission statement of the university.

And the email from the university began by referencing how St. John’s was founded in 1870 “to provide an intellectual and moral education to immigrant populations.”

Some faculty behind the petition were satisfied by the email. “I can’t speak for everyone, but I was delighted by Dr. Hutchinson’s communication,” Brownstein said. “I want to protect my students from a sudden change in law that would ruin their lives. I am so glad that the University seems to share this view.”

Others, however, were not as happy with the response, specifically because it didn’t acknowledge the Immigration and Customs Enforcement (I.C.E.) agency.

Student Marilyn Alexander was disappointed that, in her view, the email did not address the “most important demand,” which was to “Refuse I.C.E. physical access to all land owned or controlled by the University.”

“All 428, at this point, people that have signed the petition and our part of the St. John’s community are calling on the University to definitively become a sanctuary and prevent I.C.E. from accessing the campus – which has not happened yet,” Alexander said in an email to the Torch.

“I am glad the University is creating a panel discussion about immigration concerns, however I am, like many, waiting for this plan to be solidified,” she said. “I am glad that some action is taking place but I also see them as baby steps toward a much bigger action.”

Alexander said she wrote her own petition and emailed the text to professors for guidance, but was informed that they had already drafted one. Hers is the second name listed on the petition.

She believes that if St. John’s isn’t working to protect undocumented people within the University, it “risks losing its status as one of the most diverse universities within in the U.S.; it is immigrants and the children of immigrants that have made St. John’s the vibrant multicultural community that it is.”

A copy of the requests listed in the petition is below. The full petition can be found here. 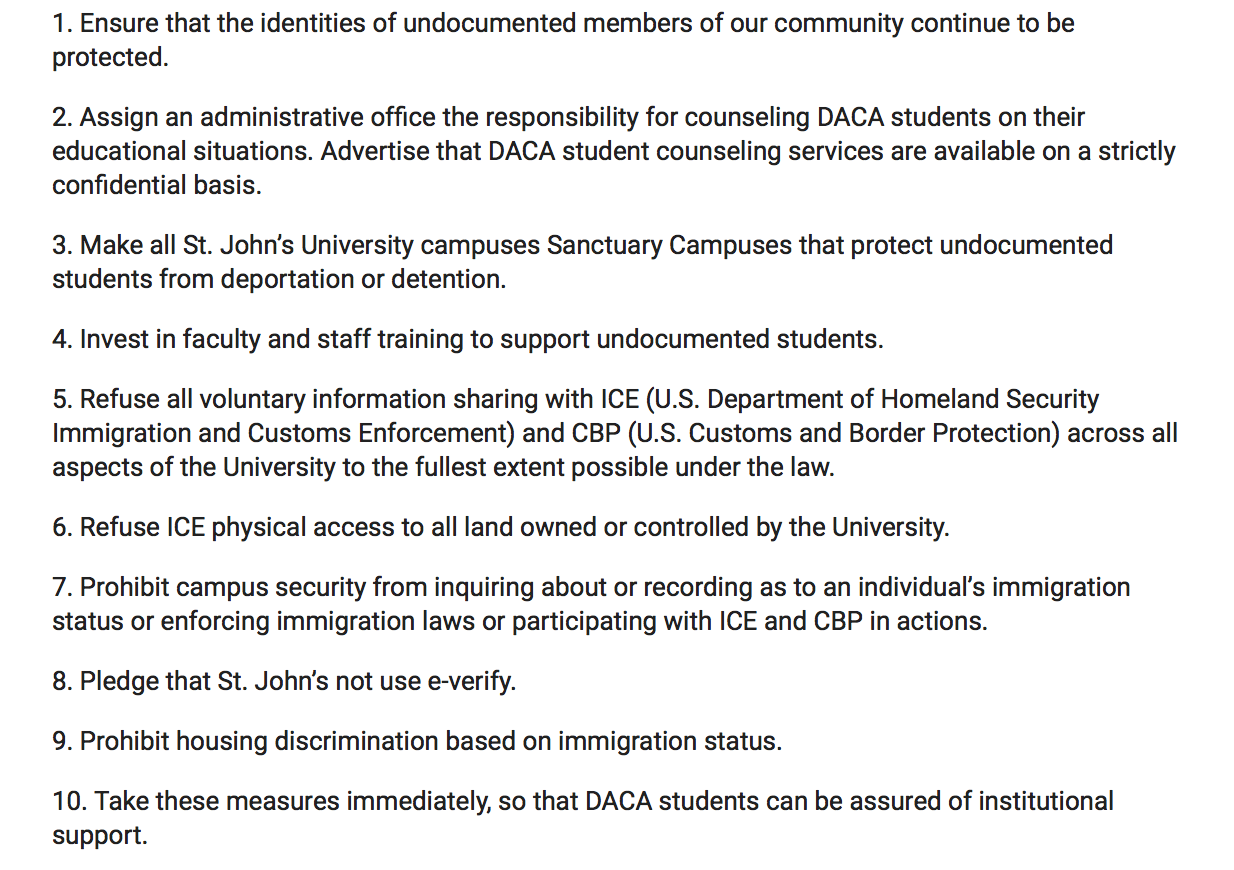