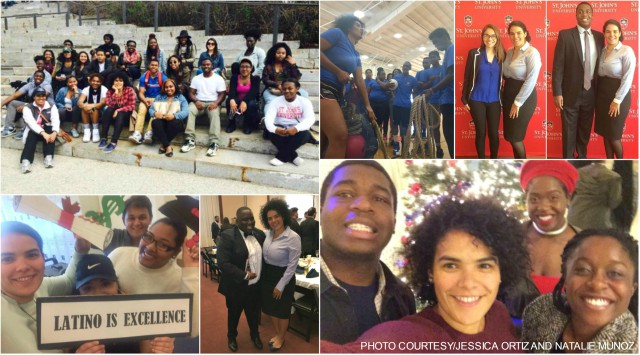 Students and a faculty member connected to the The R.I.S.E. Network say they are disappointed and confused by the recent departure of a popular administrator who they say was instrumental in the rise of the African American and Latino student mentoring program.

Since October, seven students and one faculty member have reached out to the Torch to express frustration about why the popular former administrator – Natalie Munoz – says she wasn’t considered to become director of R.I.S.E. They say they haven’t been given an answer.

Munoz, former Assistant Director of the Office of Multicultural Affairs, left the University at the start of this semester and now works at the University of San Francisco, according to her LinkedIn page.

The University declined to discuss Munoz’s departure, citing its policy of not publicly speaking about any employee’s reason for leaving, according to Elizabeth Reilly, director of Media Relations.

Created in 2013, the R.I.S.E. Network program – which stands for “Reach, Inspire, Succeed, Empower” – aims to “maximize the potential of African American and Latino students” and increase their retention rates. The mentoring program seeks to achieve this through “comprehensive support, guidance and positive peer influence,” according to the University.

Since the program began, it has grown to more than 50 mentors and 134 mentees, according to Dr. James Salnave, associate dean of Student Development. The students who reached out to the Torch credited Munoz for their positive experience with the program.

In an email exchange with the Torch, Munoz said she left the University because she wasn’t promoted and was denied twice from the doctoral program. She said the message she received was that “hard work doesn’t equate to a promotion.”

“I realized the harsh reality that as a Latina woman there was no room for growth for me academically or professionally,” said Munoz, who is of Cuban and Dominican descent. “And while I couldn’t fathom leaving the students in R.I.S.E., I also couldn’t fathom teaching them to settle.”

That explanation hasn’t sat well with the R.I.S.E. students she’s gotten close to in recent years.

Khila James, a sophomore mentor and the Social Media Coordinator of R.I.S.E., said the program hasn’t felt the same this semester without Munoz involved.

“At our meetings, our events and even just conversations among the leaders, you can just feel that things aren’t the same,” James said. “Something is missing, and it’s [Munoz] and all that she brought to R.I.S.E. with her devotion, and enthusiasm, and just how much loved she poured into R.I.S.E.”

Salnave said the idea for the R.I.S.E. program was born out of concerns five or six years ago about low retention rates for African American and Latino students. He said Kathryn Hutchinson, Ph.D., vice president for Student Affairs, created a committee in search of a solution.

Focus groups held through Student Government Incorporated and Institutional Research helped them develop the pilot program. Salnave said they wanted a mentoring-type program, “but didn’t want to make it a typical mentoring program that you see around the nation.”

Salnave said they added the word “network” after R.I.S.E. “because we want students to understand it’s not just the relationship they have with their mentor, they have relationships also with administrators and faculty members. We are here to assist them.”

The pilot program was launched four years ago under the Office of Multicultural Affairs. Salnave, who is a R.I.S.E. advisor, said the program was moved to the department of Student Development because it can reach more students and provide more funding.

When asked about Munoz’s role in the program, Salnave said she, “facilitated the program, as was her job.” Munoz, however, said she developed much of the strategies for the program.

“My mindset was that no one can R.I.S.E. without the help of a community and so I developed a plan to strategically build relationships with faculty and administrators that I knew either because of their titles and positions of power or their compassion could positively influence the lives of the students in the R.I.S.E. Network,” Munoz said. “More than anything else I changed the students cant’s into cans and their dreams into plans.”

Miguel Vasquez, a senior mentor and Student Coordinator of R.I.S.E., was the first to come to the Torch to express confusion about Munoz’s departure. He then gathered fellow R.I.S.E. members who spoke on-the-record about their disappointment.

The students believe Munoz was qualified for the new position of Director of the R.I.S.E. Network, which Salnave said was created this year when the program moved to Student Development. But Munoz said she wasn’t considered.

“I honestly have no idea why they wouldn’t make her director, she’s been the main person since the beginning,” said Taylor Warner, a junior R.I.S.E mentee. “She’s worked harder than anyone else and she really deserved it.”

Kimberly Balderas, a sophomore and mentor in R.I.S.E., described Munoz as a “role model” and said her leaving “was really devastating.” Others feel R.I.S.E. has lost a parent figure. “We all connected with her, and through her we all grew,” said MyKayla Wilson, another sophomore mentor. “We’re all a big family.”

Raj Chetty, an English assistant professor who focuses classes on race and the Caribbean, credited Munoz for reaching out to professors via email when the program began three years ago to have them interact with the first-year students.

Chetty said R.I.S.E. has had a positive impact on the University.

“R.I.S.E.’s very existence, and this is what’s beautiful about it, is to address a particularly disproportionate piece of information – that retention figures can go up everywhere, and should go up everywhere, and we should be trying to retain all students,” Chetty said. “But we need targeted kinds of programing in particular for Black and Latino students because retention is worse amongst those students. R.I.S.E. is evidence that it’s an issue. And so, if we’re not talking about it as an issue, it’s a contradiction, because we know it is.”

Munoz’s departure also comes on the heels of student criticism that the diversity of the student body isn’t reflected in the administration and faculty. The students who spoke to the Torch about Munoz leaving all cited this. According to the University’s Fall of 2015 Fact Book, an estimated 69 percent of full-time administrators and 74 percent of full-time faculty members are white.

The University has addressed similar issues regarding student concerns regarding diversity within faculty and administration.

Last year a grassroots student group called Students of Consciousness distributed a list of demands sought on campus, including more faculty and administration of color. Dr. Andre McKenzie, one of the chairs of the President’s Multicultural Advisory Committee, responded in an interview with the Torch that he believed PMAC could work together to address the concerns.

And in President Conrado “Bobby” Gempesaw’s State of the University address in September, he asked Nada Llewellyn, in her role as the University’s newly created chief diversity officer, “to embark on a comprehensive listening tour and meet with various constituencies and harness the resources of our university to promote a more inclusive and equitable St. John’s community.”

As far as R.I.S.E. is concerned, Salnave said the University has a vision to keep the program evolving and a new director has recently been hired.

Salnave also wants to “increase the number of students we connect with; looking to also have more of an academic presence, more faculty involvement, more administrative involvement, through what we call the ‘net.’”