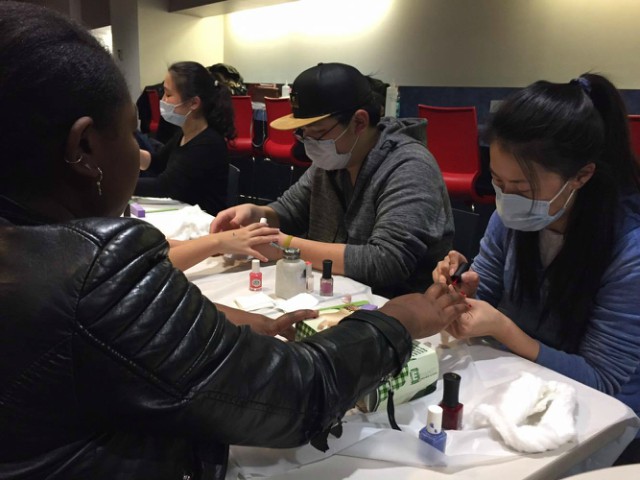 She’s not exactly a licensed therapist, but as the arranger of the water beads station, senior Tangina Alam says that they have proven to relieve stress once students “experience its sensation.”

“The water beads are meant to be therapeutic and calming,” Alam said. “Students were reluctant to try out the water beads, but as soon as they did, they were immediately entranced.”

The water beads are just one portion of the services the Resident Students Association (RSA) provided students for their Finals Stress Reliever event at Montgoris Dining Hall on Wednesday, Dec. 7.

There were manicures, eyebrow waxing and massages by Breezy’s Nails, an oxygen bar, a coloring station, a sensation booth and food from Qdoba.

Alam is a part of the programming committee of RSA, helping to curate the Finals Stress Reliever and other events on campus such as Battle of the Voices and Java Johnnies.

“The finals stress reliever is one of the most important events that we do because it’s our biggest final event of each semester,” she said. “It’s kind of like a last chance for students to relax before they study for finals.”

Alam was in charge of the water beads and the sensation booth.

“We use essential oils and steam to kind of relax the muscles in the face and the sinuses as well as the pores,” she said. “The sensation booth was successful because people were bringing their friends over to enjoy it with them.”

The newest edition to this year’s Finals Stress Relief was the oxygen bar, run by Airheads Incorporated.

Vice President of RSA, senior Nicolas Hawkins, said that the oxygen bar was the organization’s way of “taking the event to the next level.”

“St. John’s hasn’t seen anything yet from RSA,” Hawkins said. “We have so much more in store for next semester.”

Senior Diamond Ross heard about the event at the last minute, but knew she had to be there

when she learned of the services they were offering.

“I literally just found out this was happening while I was at the firework show and a crowd of people were going over to Montys,” she said. “I heard there was Qdoba so I thought why not?”

Sophomore Arielis Grady was so excited Breezy’s was there because she usually treks there to get her nails and eyebrows done.

“Even though we were in a different setting, the quality was the same,” she said. “This definitely relieved the stress of me having to make my way to Breezy’s to get my nails done.”

According to the University’s website, RSA’s mission is to construct and participate in social, educational and service programs that cater specifically to students living in the Residence Village.

As advocacy chair of RSA, sophomore Khila James, is helping to do just that.

“I support the mission of RSA which is to bring the residents together,” James said. “I basic

ally do outreach to students on campus and listen to the problems they have. I come up with ways and strategies that we can go about fixing these issues.”

James said one of the main issues students have on campus is that “there aren’t really stress relievers available.”

“Finals are a stressful time and there’s nothing really on campus that helps us through it,” she explained. “We get to come together and relax a little bit, eat some good food before the stressful week ahead.”

ime for her sorority’s semi formal.

“I got silver because it matches my dress,” she said. “It’s free, it’s right on campus and it relieved the stress of me having to get my nails done.”

White’s sorority sister, sophomore Melanie Orlando, enjoyed the services with her. “It’s kind of crowded but it’s worth the wait,” Orlando said. “The massage relieved a lot of stress, it really got my neck area and I needed that the most.”

Sophomore Briana Scripture spent her time at the oxygen bar immersing herself in the scents of eucalyptus, almond and orange.

Scripture said this was her first time experiencing an oxygen bar, and it’s an experience relieved much of her finals stress.

“Your nose kind of feels cool but it feels good,” she said. “This is something I’d definitely do again.”