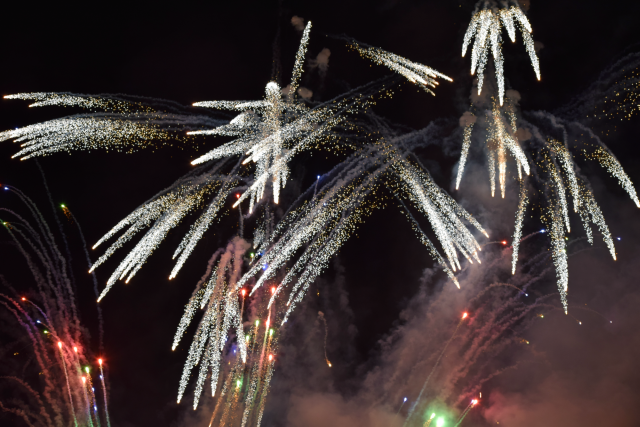 The traditional Grucci Fireworks Display were on full display on the 26th annual Winter Carnival on Dec. 7.

St. John’s 26th annual Winter Carnival was a hit this year just before preparation for final exams became the campus’ main focus. With decorated buildings and lighted trees around campus, Christmas spirit was shown throughout the entire St. John’s community.

It consisted of the traditional Tree Lighting and the Grucci Fireworks Display. At 7:45 p.m., in preparation for these main events, there was a performance by the Stormettes Kick Line Team.

“The fireworks, I thought it was a great way to blow off stress,” sophomore Stephanie GoPaul said. “I loved it!”

Like GoPaul, most students that hadn’t been to last year’s show, enjoyed this year’s festivities.

“It was my first time coming,” sophomore Sieta Leon said. “It was so nice … I wasn’t expecting so much to happen.”

Those that came earlier than the 8 p.m. start time enjoyed complimentary hot dogs and pretzels in front of the Undergraduate Admission and Welcome Center.

“The fireworks were louder last year, and it was much colder,” junior Marjan Islam said, recounting the 25th Annual Winter Carnival.

“It was nice, I appreciate that we did this,” Islam said.

According to those St. John’s students, this year’s Christmas Spectacular, organized by Student Government Incorporated (SGI), had a big turnout.

“It was nice to see everyone in the St. John’s community come together and be joyful,” sophomore Kristen Swett said.

The Red & White Community Dessert Party followed the event at 9 p.m. in the D’Angelo Center. Those that were early received a complimentary St. John’s gift for the holidays.

“A lot of people were in the Christmas spirit,” Leon said.

“It was nice to see everyone in the St. John’s community come together and be joyful,” Swett said.