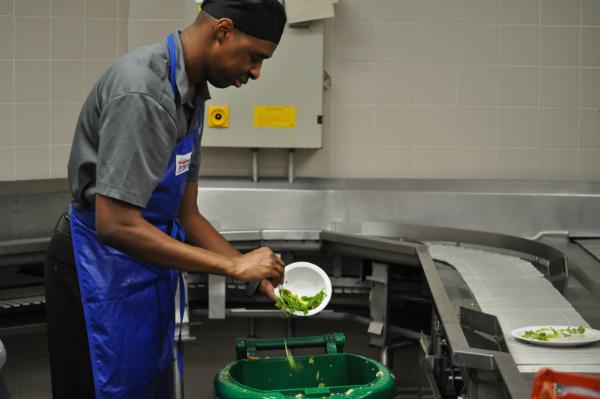 An employee behind the conveyer belt, scraping off leftover food from students’ plates.

Thomas Goldsmith, director of the Environmental and Energy Conservation department, and Joe Costa, a student worker under Goldsmith, met with the Torch to discuss updates in St. John’s environmental conservation work.

Due to this project’s completion, the University completed the New York City Carbon Challenge. The challenge was issued by Mayor Bill de Blasio, and is a part of New York City’s commitment to become a greener city and “reduce greenhouse gas emissions by 80 percent below 2005 levels by 2050,” according to the city’s Office of Sustainability website.

According to Goldsmith, St. John’s joined the challenge in 2007, committing to the reduction of its greenhouse gas and carbon emissions by 30 percent by the year 2017.

“We met this goal a year early,” Goldsmith said.

Next in the agenda for the Environmental and Energy Conservation department is to raise awareness about the post consumer food waste among the student body with the ninth annual RecycleMania Tournament.

RecycleMania began on Monday, Jan. 23 and will last until April. According to the University’s website, the Tournament’s goals are to:

Motivate students and faculty to be more conscious of recycling habits;
Encourage a dialogue and understanding of food waste on campus (mainly in Montgoris Dining Hall);
Get students more active and aware of St. John’s Sustainability;
Reach a campus-wide 50 percent diversion rate

Costa, who is a senior Environmental Science major, said that their biggest goal is to “reduce the amount of food that [students] waste.”

Goldsmith said that the Environmental and Energy Conservation department has collected pre consumer waste from Montgoris since 2012, with bins that amount to 350 pounds a day. This waste has since then been composted right on campus.

They now have a pulper which helps speed up the composting process. However, they want to reduce the food waste that they pulp every night by 50 percent.

This is why RecycleMania’s main target will be the students who eat at Montgoris every day. Goldsmith and his team will set up a table beside the conveyer belt where they’ll ask students to fill out a survey, to find out why they didn’t finish the food on their plate.

They’ll also ask students to scrape off their own food from their plates onto the green bins — a job that the back-of-the-house does every day.

Goldsmith said this is a part of the process so that the students see for themselves what they’re wasting. “We want to change habits,” Goldsmith said.

Costa added that they will also be able to observe “in real time, if it’ll reduce the [post consumer waste] bins.”

The students may also participate in a raffle and have the chance to win a bike, which will be on display. A storyboard, which was created by students, will appear above the conveyer belt, showcasing the University’s “Full Service Organics.”