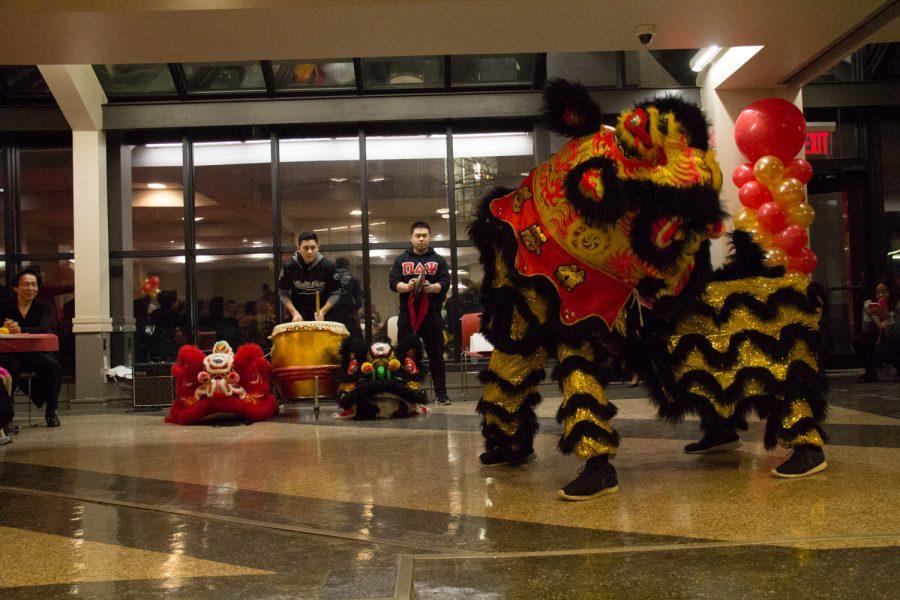 They enjoyed an evening filled with cultural performances including the traditional lion dance and a variety of Asian dishes toward the end of the night.

“St. John’s does its best for students to feel welcome no matter what culture they are from,” junior Esteban Acosta, an education major, said. “This is a nice way for international students to feel at home even when they are far away from their families.”

The dinner was commemorating the year of the Rooster, bringing together not only international Asian students, but also the students and faculty from all cultures at the University.

“The Lunar New Year Dinner is one of the Office of Multicultural Affairs events I always look forward to,” Stephen Eng, one of the students that performed in the lion dance, said. “It’s a time for everyone to come together to ring in the [Chinese] New Year with great people, performances and, of course, food.”

One of the most famous traditions during the Lunar New Year is the lion dance and fireworks. According to the Chinese tradition, the lion dance is thought to bring good luck and scare evil spirits away. Fireworks are also believed to drive away those same spirits.

“Lion dancing in my opinion is a big part of Lunar New Year,” Stephen Eng, the fifth year pharmacy student, said when asked about the lion dance performance. “It brings a lot of energy, scares away evil spirits and brings good luck. My lion dance team and I love performing because it’s a great way for us to share a part of our culture with the St. John’s community.”

The first Lunar New Year Dinner was initiated in 2003 by Rosa Yen, who designed Project Asian and International Mentoring (A.I.M.) program in 2001. Project A.I.M. is a peer mentoring program housed in the Office of Multicultural Affairs.

“Through Project A.I.M., Student Affairs learned that many of our Asian international students often feel homesick during this significant Asian holiday,” Yen said in an email.

Yen said that because the Lunar New Year occurs during the school year, the University’s international students are “unable to be home for the most significant family reunion of the year.” Therefore, Yen adds, that a dinner to celebrate it was organized “in the hopes to put the student’s nostalgia at ease.”

Even though the event was in celebration of the Chinese New Year, it wasn’t limited to international students from other countries. Marillac Terrace was filled with students and their family members from all kinds of cultural background as well.