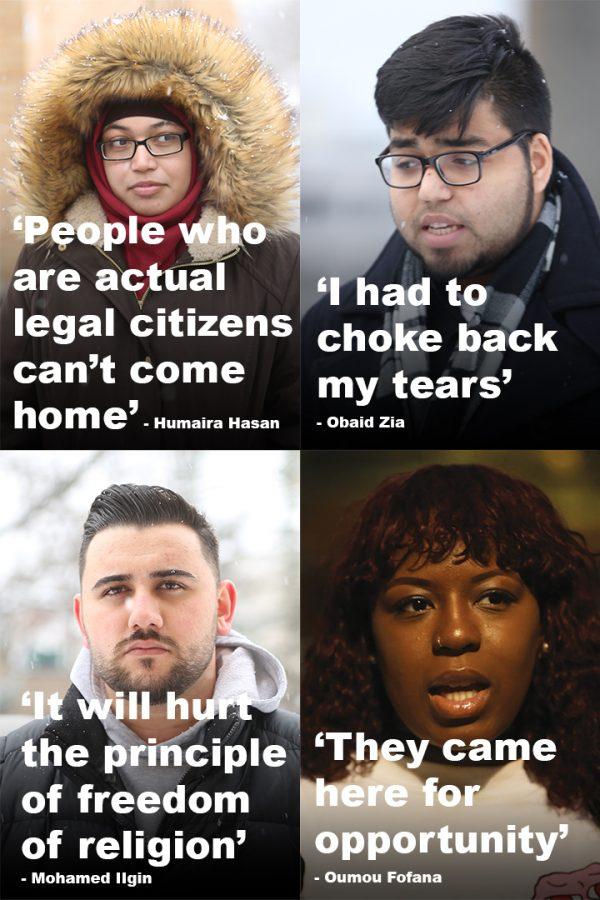 An executive order on immigration has shaken the nation with a force that’s being felt here at St. John’s.

“As a Catholic and Vincentian University with a 147-year history, St. John’s has—and will always be — a place that welcomes immigrants and the children of immigrants,” Gempesaw said. “This year, the Congregation of the Mission fittingly celebrates the 400th anniversary of the Vincentian Charism as the year of Welcoming the Stranger.

“At St. John’s University, we support all members of the University community, regardless of their country of origin or their chosen faith. We are committed to continuing this tradition.”

Gempesaw also urged students who have travel plans to or from the countries included in the order to consult with the University’s Office of General Counsel before making plans.

“We are in the process of reviewing the full impact of the Executive Order and reaching out to members of the University who may be directly affected,” he said.

The White House says the executive order seeks to protect “the United States from foreign nationals entering from countries compromised by terrorism, and [ensure] a more rigorous vetting process.”

Since its signing, the order has sparked controversy, with some calling it a “Muslim ban.” Trump has said that his executive order is not a Muslim ban, but an “extreme vetting.”

In Queens, protests ensued at John F. Kennedy International airport on Saturday, after news spread that two Iraqi refugees were being detained at the airport as the order went into effect.

“The most powerful moment for me was when the crowd began a chant that began with ‘Muslims are under attack’ and I started tearing up because the situation suddenly became real to me,” Zia, who is Muslim, said. “Like these people, most of whom were white and most likely not Muslim, are marching and yelling and passionate about me, my family, my community.”

And within the community of higher education, the order struck a chord, as news broke that some students and professors were being detained at airports across the country.

Other universities such as Harvard University, the University of Massachusetts and Stanford University have had issues with students or professors who have either been detained upon arrival in the U.S. or who risk being stuck in nations included in the executive order.

Several of St. John’s University’s Muslim students and one alumna said they were concerned by the divisive message the order sends to the world.

“It makes me feel frustrated that Trump and all the people supporting the Muslim ban don’t understand that to be able to properly fight against radical Islamic terrorism, he needs to work with the Muslim community,” junior Humaira Hasan, a Psychology major, said. “If he tries to single us out because we’re Muslim, then we’re more susceptible to being manipulated by ISIS.”

Hasan said she is annoyed that “people who are actual legal citizens can’t come home because of his absolute ignorance.”

Zia, the junior who attended the protests at JFK Airport on Saturday, called the executive order “an attempt to impress islamophobic conservatives and intimidate Muslim Americans.”

“It’s absolutely absurd that legal visitors and permanent residents of the U.S. could be turned back. It baffles me that anyone could agree with the [executive order], as if someone doesn’t have the capacity to empathize with grandparents being detained, with parents ready to come home and provide but being sent back,” Zia said. “What about their children? The thousands of dollars they spent? Their jobs? It’s incredibly difficult for me to understand how someone could look past the immorality.”

But students aren’t the only ones in higher education feeling contempt toward the order.

The Association of Catholic Colleges and Universities (ACCU), which represents 238 institutions including St. John’s, issued a statement on Sunday opposing the executive order.

“As the voice of Catholic higher education, the Association of Catholic Colleges and Universities expresses its strong opposition to the Executive Order signed by President Donald J. Trump concerning U.S. immigration policy. We stand in solidarity with other Catholic and higher education organizations that recognize the moral obligation of our country to assist migrants, particularly those who are fleeing any kind of persecution,” the statement says.

In his statement Monday night, Gempesaw said he joins more than 100 presidents of Catholic colleges and universities in support of the ACCU’s statement.

The Association of American Universities (AAU) is also calling on Trump to reverse the order.

“We recognize the importance of a strong visa process to our nation’s security. However, the administration’s new order barring the entry or return of individuals from certain countries is already causing damage and should end as quickly as possible,” the AAU’s President Mary Sue Coleman said in a statement on the association’s website. “The order is stranding students who have been approved to study here and are trying to get back to campus, and threatens to disrupt the education and research of many others.”

The AAU represents 62 different universities, both public and private in both the United States and Canada, including nearby New York University and Columbia University.

“I think that’s big, that St. John’s would do that,” she said. “That’s why I’m so glad that I graduated from this school, because this school is so diverse. They look out for their students.”

Sophomore Asheq Uddin said he understands the purpose of the executive order. However, he believes it is misguided and misinformed.

“The problem of national security is a big one and one that we should pay particular attention to, but to give priority to someone attempting to immigrate to America based on if they’re Christian or not, just doesn’t make any sense,” Uddin said.

Trump did an interview with the Christian Broadcasting Network’s David Brody on Friday, in which he called persecuted Christians a priority. The comment drew criticism from many for expressing a preference based on religion.

The executive order also suspends the United States’ Refugee Admissions Program, for 120 days. During this time period, United States Refugee Admission Program will be responsible for reviewing the application and adjudication process in an effort to what additional measures can be taken to decide if refugees pose a threat to security for the U.S.

Senior Mohamed IIgin believes that Trump could have approached the action differently.

“Being an immigrant in this country, and also coming from a Muslim country, I am proud to call myself an American, but this is just definitely not the American way to approach this,” Ilgin said. “l hope President Trump can come up with a better way to deal with this problem.”

Even students who are not directly affected by the executive order are bothered by its message.

“I’m not afraid for my safety, my wellbeing, I am not afraid that I will be displaced, but, I’m terrified for my friends, my classmates, people I don’t even know who are genuinely terrified,” said senior Eesha Malyala, who is of Indian descent. “I am fortunate to not be affected but that doesn’t make this ban any less wrong.”

To quell deportation concerns sparked by Donald Trump’s election, St. John’s said in a university-wide email in November that it does not track the immigration status of students.

Since then students have told the Torch that they’ve noticed a section for citizenship in their advising profile in UIS. But this information is provided to the University voluntarily by students, and is different from immigration status, according to Joseph Oliva, Esq., vice president for administration, secretary and general counsel.

“St. John’s does not require a student to disclose citizenship as part of the application process; however, a candidate may voluntarily provide this information,” the school said this week in a statement to the Torch.

The University says that the voluntarily provided citizenship data enhances its ability to provide student services that may differ for students who are U.S. citizens versus international students.