Students came together for the ‘March Against the Ban’ 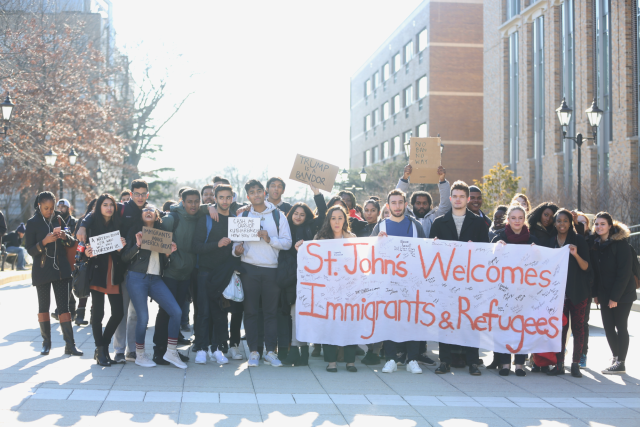 Students gathered outside of the D'Angelo Center for the March Against Ban.

Dozens of students gathered in front of the D’Angelo Center (DAC) on Monday, Feb. 6 to march in protest of Trump’s week-old executive order, which banned citizens from seven Muslim-majority countries from entering the United States.

“The purpose of the march is to make a statement that we do not accept the executive order on immigration, and essentially all the other harmful things that Donald Trump has said about immigrants, refugees and other marginalized groups,” Popek said.

“We just want to give people a voice today,” Leigh said.

Although a federal judge in Washington issued a nationwide restraining order this past weekend, which temporarily halts the travel ban, according to The Hill, the organizers said that this “wasn’t good enough.”

Popek added, “The fact that this is even a thought is an issue, and it’s a cause for protest. I don’t want to live in a country like this, where we’re debating whether people can stay here or not—it’s not right.”

When asked what they would say to people against the marches ensuing on and off campus, Leigh said, “We as people in this country have a voice and we have to speak out.”

“People talk about how you can’t do anything, you’re just one person—but when it’s a group like this, or even if it’s just a few people—that’s saying more than being silent,” Leeman said.

According to Popek, the organizers had help announcing the protest on social media from other organizations on campus, such as SJU Catholic Relief Services and Feminists Unite, after sending them an email about it.

Students signed their name on a banner that read “St. John’s Welcomes Immigrants and Refugees,” which was laying on a podium that was set up right outside of DAC’s main entrance. Popek said she hoped the banner could be displayed somewhere in the University, or “maybe even in DAC.”

Arturo Humberto Enamorado III, a senior history major, said that he was there to “show solidarity.”

“I don’t support that immigration should be a thing that’d be banned. We’re all immigrants here, we all deserve to have a chance,” Enamorado said.

Once a crowd of over a dozen students huddled around the podium, Popek thanked the students for being there, and introduced the first speaker.

During his speech, junior Kenneth Shelton referenced Malcolm X, Martin Luther King Jr. and the importance of being “a friend” instead of “an ally.”

He continued, “Well, as an ally, I’m expecting for you to stand up for me when things go bad. But I disagree with that. I think there’s something stronger, something bigger than being an ally. Something more important than being family. A word that is used so loosely, so colloquially, that the meaning is lost. That word, is friend. Be my friend, not my ally.”

Shelton explained that because you choose your friends, they are special.

Thamir Williams, the president of St. John’s Chapter of the National Association for the Advancement of Colored People (NAACP), was the next to go up to the podium. He encouraged students to reach out to government officials in order to see real change.

“Talk to your mayor, talk to your councilman,” Williams said. “We need to learn how to push and keep organizing.”

After Williams came another speaker who introduced himself as Johnny.

Freshman Johnny Wiley spoke with a powerful voice and passion, arousing the crowd of students to shout and applaud throughout his speech. He spoke about being “shocked” when he heard of President Trump’s executive order.

“I was scared for my Muslim family members and scared for my Muslim brothers and sisters worldwide,” Wiley said. “It wasn’t only because this ban was unconstitutional, but it was because my friends in Syria wouldn’t have a place to seek refuge when tyranny was in their land; that millions of green card holders wouldn’t be able to come back to the land that they love and visit their families; that children would be harmed, and as a result of this ban, be killed.”

“I was in disbelief that the president of the United States, but more so, a human being, could see people suffering, see children crying and see people dying, and not care about it simply because of fear of Muslims and xenophobia,” Wiley said.

In regard to the march, Wiley said that they are the “children of people who march for their rights … It’s our turn to grab the torch and keep on running with it, now let’s make sure we don’t drop that torch, because there’s too much at stake—America’s at stake.”

Wiley finished his speech by addressing the crowd, “It’s because of people like you that I can truly say that I still have faith in America.”

The last students to come to the podium and speak were cousins Seid and Ibrahim Mulic. They are the current president and vice president of St. John’s Muslim Student Association.

The Mulic cousins, who are both sophomore physician assistant majors, spoke about their family’s time in their native Bosnia during the Civil War in 1992. They said that their parents came to the United States as refugees trying to escape the persecution of Muslims in their own country.

“One of our uncles lost their leg in the war, [but] thank God nobody passed away during the war. But for the most part, our families came here to America,” Seid said. “If it weren’t for America’s open arms welcoming us, me and Ibrahim definitely wouldn’t be here today. That is the America that we know and the America that we cherish.”

Ibrahim then spoke about how his religion has been misconceived in America, with subtle promotions that show a negative view of Islam.

“I remember my first glimpse of Islamophobia was when I was a little kid and I was watching the movie Aladdin,” Ibrahim said. “Don’t get me wrong, it’s one of my favorite movies of all time, but something I noticed, that not a lot of people do, is that if you look at the main characters of the movie … all of them speak with an American accent; but all the villains speak with an Arabic accent.”

They ended their speech by saying that one positive thing that came about President Trump’s executive order is that “it’s caused people to notice that Islamophobia exists and it’s strong in America.”

Furthermore, Seid added that, “The meaning of the word ‘Islam’ is peace … so how can a religion that was founded on peace have anything to do with terrorism?” This was met with applause from the marchers.

Afterwards, the marchers gathered behind the “St. John’s Welcomes Immigrants and Refugee banner,” which was held by Seid and Ibrahim Mulic, along with organizers Popek and Leeman. Some photos were taken, then they marched across the campus. They were met with some students and faculty smiling and chanting with them as they passed, as well as others ignoring them.

Some of their chants included: “This is what democracy looks like;” “Say it loud, say it clear, refugees are welcome here;” “Love trumps hate” and “No ban, no wall, liberty for all.”

As of Thursday night at 8 p.m., a federal appeals court had declined to reinstate Trump’s order.