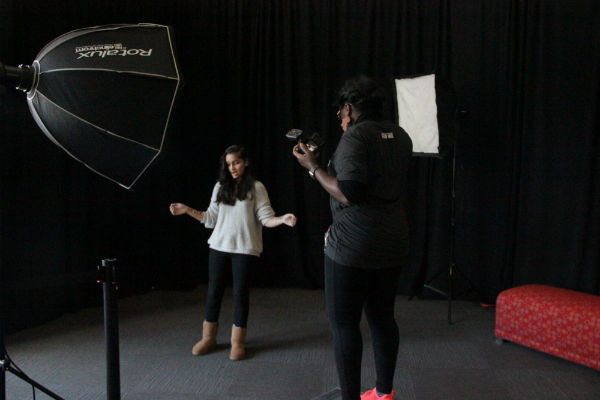 “Dear World,” a nationwide photography project which calls itself “part business/art project/social experiment” on its official website, set up a portrait studio this past Thursday, Feb. 16, in the DAC living room. All St. John’s community members were invited to participate in the large-scale photoshoot from 10 a.m. to 3 p.m.

Dozens of students at a time filtered into the room throughout the day to become a part of the project, first congregating into small groups around several tables set up for the event.

The process of participating in the portrait session consisted of three steps: Participants would initially share a personal anecdote about their background or past experiences; a Dear World volunteer would then write a selected phrase from the participant’s story on their skin in black marker and lastly, the participant would step into the photography studio to have their portrait taken.

“I find it interesting, because everyone gets to show their story. I think everyone has something to say, so it’s really nice that Dear World is helping to show that,” Sara Kazi, a freshman biology major, said shortly before joining a group.

A private VIP portrait session was held the evening before the public event, where a group of student leaders, faculty and staff shared their own stories and were photographed in the Little Theatre. These images were projected onto a screen in the DAC living room the next day, so participants from the general public could glean a sense of what being a part of the Dear World project entails.

“We invited people who students know of, but maybe don’t know the full story behind them or the full journey that they’ve had,” Associate Director of Residence Life, Sue McNeilly, said.

McNeilly is also a member of the Student Affairs Community Inclusion and Diversity Committee, the driving force behind Dear World’s presence on campus. McNeilly said that the idea for having Dear World come to the University came from what she described as a post-election lack of communication among the student body, faculty and staff.

“Our committee  works to create spaces where we can help educate students and staff about things like inclusion and diversity,” McNeilly noted.

In November, we found that our students were in a really tough place of being able to talk to each other, because they were really just honing in on the differences between them as opposed to maybe some of the commonalities and things that we share,” McNeilly said.

Later that evening, the portraits were screened in the Little Theatre and a group of student leaders from both the Queens and Staten Island campuses were asked to share their story again, with a larger audience.

“Unfortunately, not everyone has a voice in the world today and I feel like that’s something that’s invaluable,” Anthony Pryor-Calloway said, a senior and Resident Assistant who assisted in facilitating the event. “I feel like Dear World does a good job of just allowing people to tell their stories in their own voice, and at the same time allows room for people to just come and understand each other.”