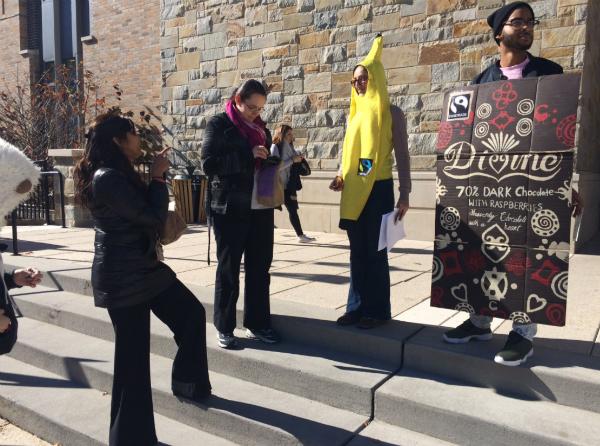 Members of the SJU Fair Trade Committee spoke to students about Fair Trade on Oct. 31, 2016.

Fair Trade is defined as trade which gives fair prices to manufacturers in developing countries to ensure that marginalized farmers and workers around the world receive  better treatment and a more stable income.

Co-Chairman Prof. Sean Murray spoke about  the committee’s efforts in an interview with the Torch.

Murray also elaborated on the organization’s plans for the future.

“We have two objectives still to complete: Ensure that each campus vendor provides at least two Fair Trade items, and have the SJU administration endorse a non-binding resolution to continue raising awareness about Fair Trade. SJU is very close to completing the vendor objective … With regards to the resolution, our hope is to begin talks with administration this semester,” Murray added.

Murray also stated that he believes students play the most important role when it comes to making St. John’s a Fair Trade-designated University, and listed a few actions students can take.

“Fair Trade represents social justice and a commitment to sustainability which I think is really important in a world where the consumer has a large influence on products that are in demand,” Lemmerz said.

She continued, “I think as a Vincentian University our missions align perfectly and by becoming a Fair Trade Recognized University we would open ourselves up to more opportunities to raise awareness and make an impact on campus by promoting Fair Trade and all its parts.”