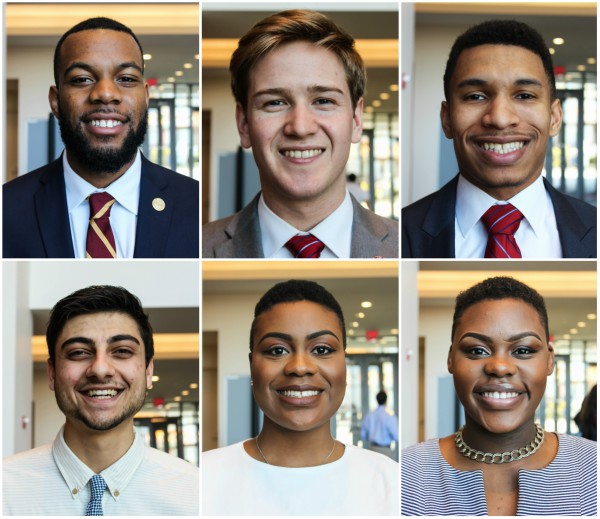 Student Government Inc.’s (SGI) elections will soon take place. The Torch spoke with some of the candidates for next year’s SGI e-board and they told us about their platforms as well as their school involvement. The only ticket running in the election is the REAL (Realizing Excellence through Advocacy and Leadership) ticket, headed by presidential candidate Frank Obermeyer. All other candidates are running independently.

The Torch was unable to secure interviews with the following candidates, whose profiles are not in this piece, which includes: independent candidate Carl-Edward Fetiere for treasurer; REAL ticket candidates Alissa Santolo for secretary, Brian Wagner for senior senator and Domonic Haire for sophomore senator.

Elections will take place on March 23 and 24. They’re open to all undergraduate students. Students may vote via MySJU as well as in booths that will be set up in the D’Angelo Center.
Student Government Inc.’s e-board debate will be held on Monday, March 20 in DAC Room 416, during common hour. The Torch’s Editor-in-Chief, Suzanne Ciechalski, will be moderating the debate. Send in your question suggestions to [email protected] 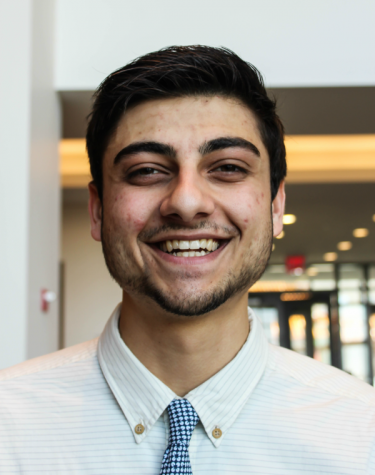 Anthony Savino is a sophomore running independently for the position of junior class senator.

He is a journalism major and currently serves as the chair of Altruistic Campus Experience (ACE), a philanthropic project of his fraternity, Sigma Pi, as well as a campus tour guide.

In addition, he is a staff writer for the Torch and is involved with the TV Club.

He wants to place an emphasis on SGI’s visibility on campus, and bolster collaboration between different organizations and students. “I think what can always get better is visibility, especially on campus,” Savino said.

“I feel like so many people don’t know how much SGI and St. John’s offers in general, I want to get that information out to the public,” he said. “Improving the visibility of SGI would be one of my main focuses.”

Savino sees the diversity of the St. John’s community as a strength that can be utilized through communication and collaboration.

He proposed accomplishing this through encouraging organizations to collaborate not just with those they are already familiar with.

“I want to help people embrace the diversity of St. John’s, I want to co-sponsor events with different organizations that usually wouldn’t work together, to create more connections and friendly faces around campus for everyone,” he said.

Savino also plans to work directly with his classmates by listening to their ideas.

“I will place importance on hearing out the students’ concerns, hearing out what the class of 2019 wants to do about certain issues. I will be the listener, I will be the person really trying to implement events and spread the word,” he added. 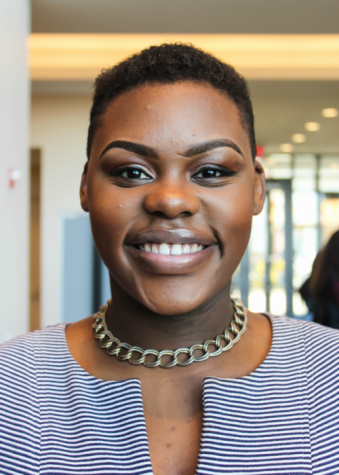 Atem Tazi, College of Professional Studies sophomore representative in SGI, is running for the position of Junior Senator. Tazi is a part of the REAL ticket.

A health and human services major, Tazi is also the community service chair of the African Students Association (ASA). She is a mentor with the Student and Faculty Engagement (SAFE) program, which provides freshman with an upperclassmen mentor to assist them in their adjustment to university life.

Tazi is also a mentee of the R.I.S.E. Network, which provides academic and career advancement tools and support to black and Latino students.

Tazi created an action plan this past year which she hopes to put into action.

The plan consists of three main goals, one goal being to put together individualized town hall assemblies tailored to each college. The meetings will allow students to “speak directly to faculty and deans,” according to Tazi. “I really want these meetings to be run by the representatives because I really plan on empowering them more, and teaching them how to use their platforms as student leaders,” she said.

Keeping the junior class constantly informed of SGI decisions and events is an additional priority for Tazi.

“I want to ameliorate forms of communication between the upcoming junior class and myself by being more present with organizations, being active and responsive on social media and promoting our floor meetings where students who are not in SGI can come speak to me anytime,” she said.

Tazi also believes that when it comes to all the responsibilities junior senator entails, experience in planning and delegation are central to being effective and helpful.

“When meeting with deans and administrators about concerns that students have about the curriculums, availability and rigor of particular majors and the standard of teaching in the classroom, you need to be able to present ideas and concerns that may conflict in a focused and organized manner,” she said. 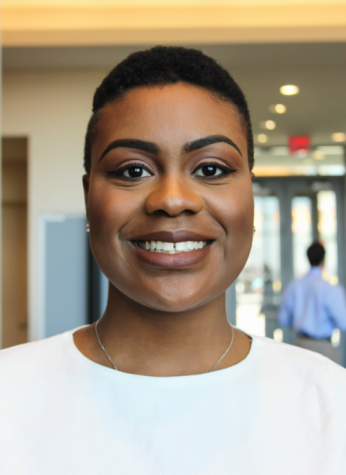 Teresa Ehiogu, current co-chair of SGI’s Budget Committee, is running for the position of SGI treasurer as a candidate on the REAL ticket. She is a junior healthcare administration major, and is also involved within SGI’s Events Review Committee. Ehiogu is also manager of the women’s track and field team and a resident assistant in Hollis Hall.

In addition, Ehiogu is on the Campus Activities Board and has been a student manager of the University’s Operations since her freshman year.

“I believe my experience in structuring and organization will help with our overall goal of bringing more structure and transparency,” Ehiogu said. “I’ve also been on both sides—having been a part of organizations since my freshman year, I have an idea of what they need.”

Ehiogu, who participated in establishing the Budget Committee’s new bylaws, which were passed earlier this year, seeks to bring “structure and transparency” and better communication between organizations. This includes streamlining the way organizations budget through the use of programs on OrgSync.

“We’re going to utilize OrgSync for all these budgetary processes to get things running smoother, and get that transparency and efficiency in giving organizations their funds,” Ehiogu said.

Ehiogu believes her qualifications for treasurer lie in the leadership roles she has served in throughout her college career and the resulting connections she has made throughout the University community.

“All the experience I’ve obtained in my leadership roles these past three years will be brought together in this position,” Ehiogu said. 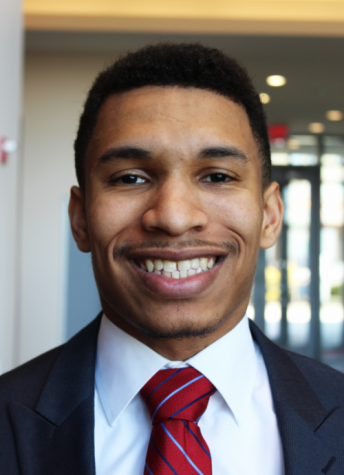 William Pugh, SGI’s Relay for Life co-chair, is running unopposed for vice president on the REAL ticket as well.

Pugh, a junior biology major, is also president of his fraternity Pi Kappa Phi, and has been involved with the R.I.S.E. Network since his sophomore year.

Pugh believes that the main way for students and organizations to succeed is through setting clear standards and goals for each committee to meet.

“One thing I’ve learned in my experience with SGI and R.I.S.E., is that structure is needed so we can reach the fullest potential possible,” Pugh said. “If there’s no goals or definitions to anything, you can’t really ever expect anything to get done. You can’t really evaluate how well a job is done.”

He also aims to ensure that SGI leaders of upcoming years will not be left to rebuild a new system at the start of each year.

“I see the vice presidential job not as a takeover of what the committees are doing, but to oversee them, to give them a voice and a clear picture of where we want to be by the new year,” Pugh said. “I don’t want SGI to start itself from ground zero with each new year, but to be able to pick up from last year’s work, and to truly empower the people within SGI so they can be leaders.”

Pugh’s main goal is to set a precedent for SGI that will continue on after he graduates.

“If I can leave knowing that I’ve left the situation in a better place than how it was when I stepped into it, then I know I’ve accomplished my real goal,” Pugh said. 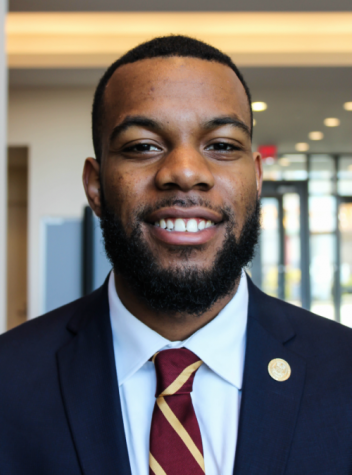 Tahmir Williams, is currently a junior representative for CPS and co-chair of the Academic Affairs Committee. He’s running independently for vice president. Williams, a legal studies major, is also the president of the University’s NAACP chapter and treasurer of the Legal Society.

Williams’ focus is on expanding students’ understanding of SGI, and working to serve their needs. “I would like to make SGI more available to students,” he said. “I would like students to know that we are here to help them.”

He hopes to accomplish this through the creation of more events centered on increasing direct interactions between SGI and students.

Another one of Williams’ goals is to improve services for students such as the shuttle bus schedules and campus dining.

He believes the best way to address students’ concerns is by listening to them.

Williams wants to extend these methods to ultimately bolster student retention rates, as well as give student organizations more tools to accomplish their own objectives.

“I would like to help the University receive higher retention rates through working with administrators and give organizations better support through communications with advisors, operations and facilities,” Williams said. 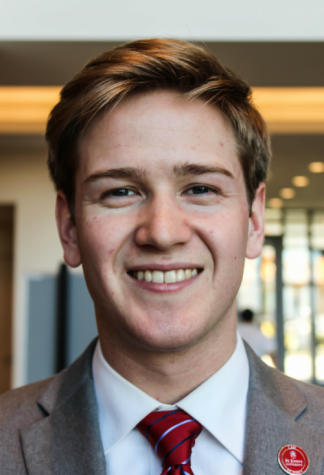 Frank Obermeyer, current SGI secretary, is running unopposed for the position of president as a candidate on the REAL ticket. Obermeyer, a junior and mathematical physics major, has been involved in SGI since his freshman year as a representative. In addition, he conducts research with Dr. Charles Fortmann and is a Career Services Career Peer.

Obermeyer believes the standard of SGI thus far has been to bridge the gap between students and administration, but he envisions it primarily as a means for students to voice their concerns. “In my years in SGI, we’ve been mostly a programming board,” Obermeyer said. “We have always been a little bit behind in advocating for students, so my main goal is to improve on that. I want student input to be taken into account in every single decision the school makes.”

“SGI’s role is to be the official voice of the undergraduate student body,” he added.

To improve on this, Obermeyer wants to implement town hall events open exclusively for students to voice their concerns, and to have these events organized by college in order to tackle issues more efficiently. “Right now there’s no system in place where we, as SGI, reach out to each individual college. Problems tend to face a whole college of the University, rather than classes,” Obermeyer said.

Another change Obermeyer seeks to make is establishing a consistent framework for SGI, beginning passing an updated constitution.

“I’ve seen three different presidents of SGI carry themselves in different ways, and I’ve seen what works and what doesn’t,” Obermeyer said. “We as SGI need more structure. This year, I spent the majority of the year meeting with the constitution committee; we have rewritten it and we look forward to getting that passed as we move into this next year.”

“[REAL] is the strongest ticket I’ve ever been on running for e-board, we have people from all aspects of student government and the University…we’re excited to start standardizing things, introducing bylaws and we’re excited to be better advocates for the student body,” he said.