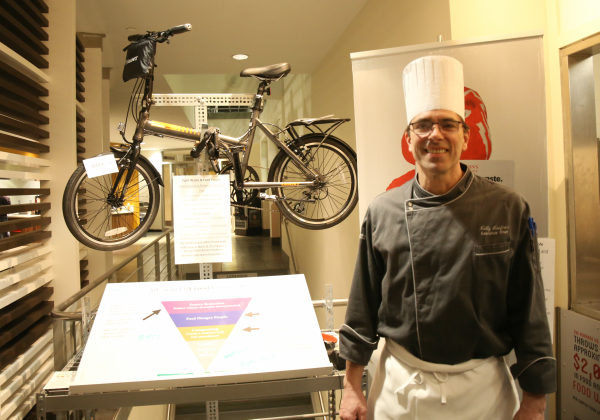 Chef Kelly Heefner said it’s important to get student’s feedback so that the can improve the options in Montgoris Dining Hall during a Recyclemania event this spring.

The ninth annual RecycleMania Tournament kicked off the raffle portion of its efforts to raise student awareness of post-consumer food waste in Montgoris Dining Hall on Monday, March 6.

This means that every week, one lucky student will win a mountain bike, until RecycleMania ends on April 1. One student has already won a bike, according to Thomas Goldsmith, the director of the Environmental and Energy Conservation department in the Office of Sustainability.

Goldsmith and his team see this as an opportunity to engage students and teach them about the University’s Full Service Organics. Their campaign for food waste reduction may even count as Academic Service Hours (ASL) for students by Monday, March 20.

Goldsmith said that students created the Full Service Organics brand to show what St. John’s does in regards to overall food sustainability. It’s now displayed above the conveyer belt in Montgoris.

“We created a storyboard so that we show what Full Service Organics is at St. John’s,” Goldsmith said. “[It’s] awareness, participation, contributing towards fighting global climate change and help feeding hungry people at the same time.”

During the RecycleMania Tournament, a table is set up right next to the conveyer belt in Montgoris at 5-8 p.m. from Monday through Friday.

Students have a chance to talk to the student workers of the Office of Sustainability, fill out a survey that asks them why they didn’t finish the food on their plate and sign their names on a board with the EPA’s Food Recovery Hierarchy—another program that the University’s involved in—as a symbol of their awareness.

Joe Costa, one of Goldsmith’s student workers, said that, so far, students are understanding the importance of having this conversation.

“We’re trying to reduce the amount of food taken, because when you leave more in the kitchen, more gets donated to Bread and Life, through Chef Kelly, Campus Ministry and other service organizations on campus,” Costa said.

An important part of the University’s sustainability work is also to pulp and compost the pre and post-consumer food waste.

“The benefits of composting in fighting global climate change is reducing greenhouse gas emissions, improving the soil for growing produce and cleaning up the waterways by using less chemical fertilizer,” Goldsmith said.

According to Costa, through their surveys, they’ve also found that students’ two main reasons for leaving food on their plates are that they either “take too much” or were “disappointed in the taste.”

In response to this, the University’s Regional Executive Chef, Kelly Heefner, who went to see the kickoff, said that initiatives like these help them accommodate the food they serve to the students.

“It’s important that the students know that if something doesn’t taste good, we can change the recipe or take it out of our menu cycle,” Heefner said. “We also are starting to think about how [to] have the students taste the food before they take it.”

Heefner said that they might put up a sign where they remind students that they can ask the workers in Montgoris to give them samples before they fill up their plates, in an effort to reduce the food waste.

In addition to RecycleMania’s sustainability initiatives, the University also participates in Imperfectly Delicious Produce (IDP), which means that they buy and use food that may not look perfect but is perfectly edible, and purchase Fair Trade produce whenever they get the chance, according to Heefner.

Students in the Food Recovery Network SJU chapter—a month-old University project—are also working with Heefner to deliver about 250 pounds worth of food that doesn’t get touched to a local food pantry.