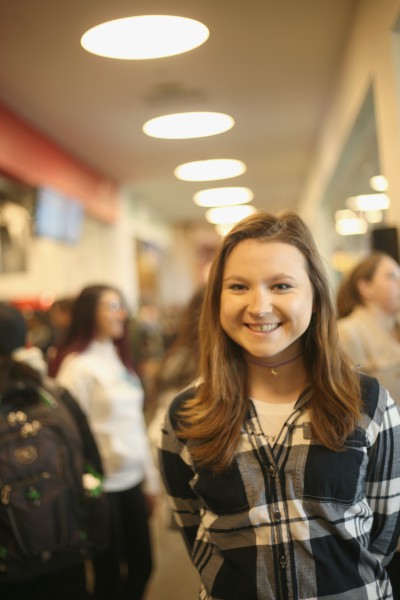 Sophomore Anna Evseev is a vegan and is a disappointed in her lack of food options at the University.

While St. John’s has vegan food options for students, the question remains, how substantial are they?

Vegans do not eat or use animal products and it is well known that people who choose the vegan lifestyle may have a difficult time finding foods they can eat.

Some St. John’s students have resorted to finding food off campus to meet their dietary needs. Some have even moved off campus.

“I currently don’t live on campus, but my precious two years living in the dorms certainly prevented me from living that lifestyle,” Hannah Pruzinsky, a junior physician assistant major, said.

“Sure, it’s possible to throw together a jumble of different vegetables at Monty’s and occasionally stumble across something good.

However, there’s no consistency. Every day you swipe in is a mystery as to what you’ll be able to eat, and that’s why moving off campus where I wouldn’t be locked into a plan came in handy,” she added.

Montgoris is fairly unpredictable, despite having a vegan station, and the Red Storm Diner can only offer vegans a small salad and just recently a veggie burger.

Being a commuter, Anna Evseev, a sophomore psychology major, finds the lack of options “stressful and annoying” when she’s hungry between classes.

Dineoncampus.com tells students what type of food is at locations on campus, but it is not always accurate or does not tell exactly what food is there.

“The school does need a change, I signed a petition last semester [for more vegan foods] and I don’t think it went through,” Evseev said about not hearing news from the petition she signed.

Sophomore communications major, Talia Nanton, talked about the main dining hall for resident students, Montgoris, and her predictable meal, “I can only get soup or make a salad and that’s not enough.”

“I’m done with being pushy, three months ago I was probably more angry,” Ceci Sturman, a junior English and government major, said on her feelings about the few vegan options.

Sturman argues that people with a special diet, like vegan or vegetarian, should not pay the same meal plan prices as other students.

“That’s terrible … or even allow us to opt out of paying for the meal plan,” she said.

Sturman has also recently found out about the campus dietitian.

“If only her role was advertised better and she had an office in Monty’s,” Sturman said. “I didn’t even know about her until an athlete told me.”

Sturman said she thought it was “unfair” that her role isn’t advertised more so that students can be able to utilize her.

She added that, “She knew a lot about veganism so it was helpful.”