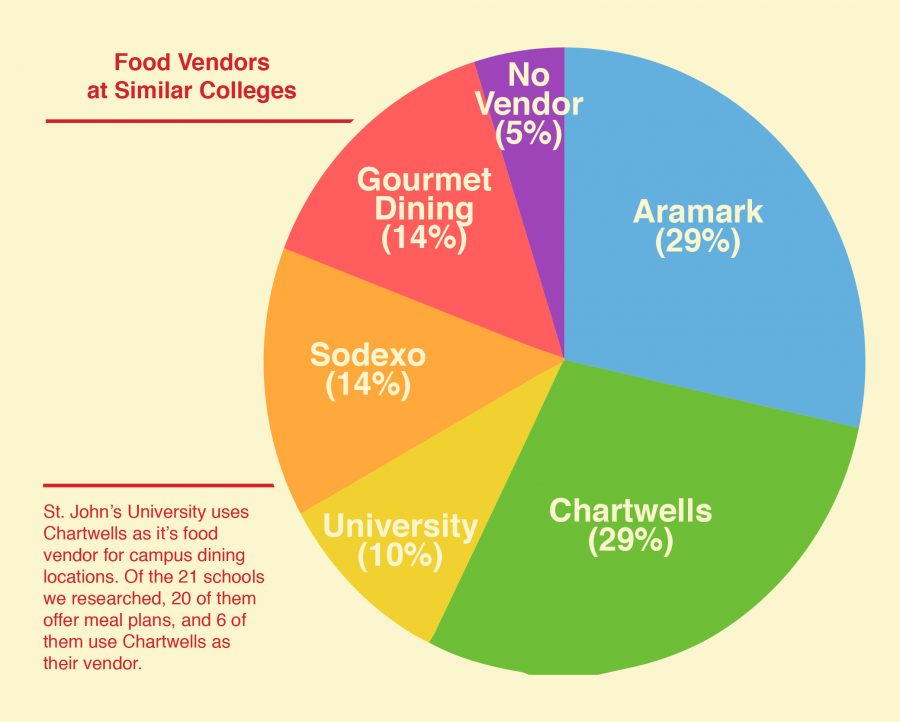 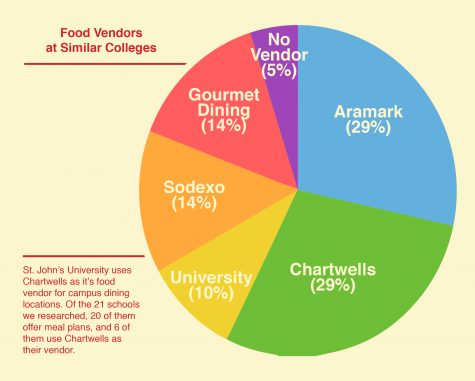 The University sparked controversy among some students last month by announcing plans to require meal plans for those who live in the townhouses beginning in fall 2017. In an interview with the Torch to explain the decision, the Director of Residence Life, Eric M. Finkelstein, M.Ed., said that mandating meal plans is “pretty standard in the industry.”A subsequent comparison by The Torch of St. John’s meal plans with those at 21 colleges and universities—schools with dorms in the New York City area along with Big East schools—revealed that requiring meal plans is in fact a common practice. Although these colleges vary drastically in food offerings, meal plan options and cost, most have selections similar in breakdown to the University’s current meal plan policies.

Chartwells, which manages St. John’s dining services, and Aramark were the most common food providers at these schools, each serving six. No other company had more than three schools.

Pace University and Hofstra University are the only schools which require all students, including commuters to purchase meal plans.

According to the office of admissions at Baruch College, the school does not offer any meal plans for commuters or residents. The rationale is that students prefer to eat off campus or purchase food from the surrounding eateries that provide student discounts.

A Dining Services representative at Queens College told The Torch that meal plans are not required for those who reside in the dorms. This is due to kitchens being located inside the rooms, however, meal plans are offered for residents and commuters. This seems to be the standard at schools that offer apartment-style dorms; of the 15 that do, only two — Pace University and DePaul University — require residents to have meal plans.

The New School did not respond to a request for comment by deadline.

St. John’s believes there is value in requiring meal plans in traditional-style dorms. “The university experience is learning to be more self-sufficient so that you’re prepared to leave here and to get you to that point,” Finkelstein said last month. “The living on campus component, [by] not having a meal plan attached to it, would be incomplete.” 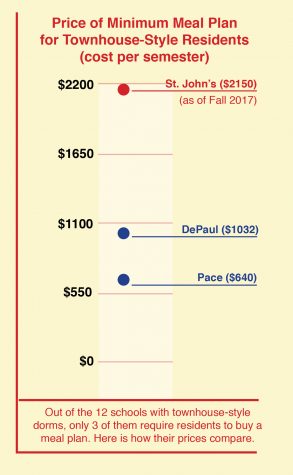 The comparison also showed that St. John’s Carte Blanche plan is the most expensive overall unlimited meal plan offered among the schools with meal plans reviewed by The Torch. The St. John’s plan costs $3,125 per semester and comes with 50 dining dollars. Fordham University, Villanova University and Butler University unlimited meal plans cost more upfront but offer more dining dollars with 550 at $3,273, 160 at $3,275 and 400 at $3,315 respectively. These prices are current for this semester at each school.

Freshman plans are mandatory at St. John’s, as is the case at the 18 of the 21 schools that mandated meal plans at their traditional style residence.

St. John’s executive director of Conference and Auxiliary Services Scott Lemperle said, “Other meal plans are very similar but there’s more flexibility in points balance,” referring to the larger dining dollar balances included in the residence village and apartment meal plans. “The apartment meal plans, the one for the townhouse, is the lower priced one of all the resident meal plans,” he added.

The following schools were included in the comparison: