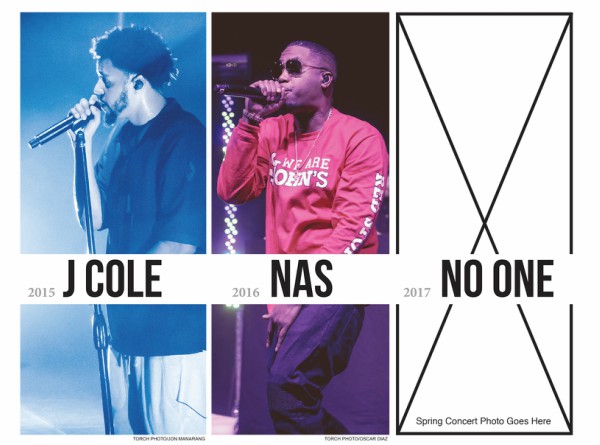 Two years ago J. Cole visited campus. Last year it was Nas. This year, no one.

St. John’s students have to wait until 2018 for a spring concert. This year’s concert was recently canceled, according to a statement  released on social media by Haraya and Student Government Incorporated (SGI).

Citing a desire to reconstruct the spring concert model, the groups said that they’re instead already in the process of planning next year’s Spring Fest, and encouraged the student body to reach out to both groups if they’re interested in helping with the planning.

“Although Haraya will not host a concert this semester, we are holding a series of events for the remainder of the semester that you will not want to miss,” the statement said.

The spring concert has been a widely celebrated event among the student body, as it’s been known to attract big-name musicians to the Queens campus. Award-winning rapper J. Cole, a St. John’s alumnus, is among those who have performed at the concert in recent years.

“We wanted to ensure that the next concert we hold together continues to live up to the standard of this important SJU tradition,” she said in an email to the Torch. Referring to SGI president-elect Frank Obermeyer, she added, “Moving forward, the president-elect will be working with Haraya on the future concert structure.”

Students had mixed reactions to the news. While some said they were not bothered by the lack of a concert, many others were surprised, saying they were not aware it was canceled. The joint statement by Haraya and SGI was posted on Haraya’s social media accounts on April 4.

“I think it’s pretty disappointing that there won’t be a concert,” senior Dylan Roake said. “Even if Haraya is doing other events, the spring concert is their crown jewel.”

Roake added that he had no idea that the spring concert wasn’t happening.

Junior Malisa Heard added, “I feel upset because this is something I look forward to every year. The spring concert is a part of St. John’s culture.”

SGI has not posted anything about the concert’s cancellation on its social media accounts.

David Yakal, a freshman, said he found out that there would be no concert through his friends. “It’s my first year here and I was looking forward to it because my friends and I all enjoyed the last concert with Desiigner,” he said, referring to last semester’s tip off.

Miuccio stressed that SGI wants to ensure that the next spring concert lives up to its reputation.

“This is an important tradition and we want to make sure the experience we’re providing for students continues to meet those standards,” Miuccio said.

When asked whether SGI felt that they wouldn’t be able to do that with this year’s concert, she said she felt she had already answered the question.

Despite the concert’s popularity, though, some students said they didn’t feel strongly about the cancellation.

“I don’t care about things like that because on-campus stuff is usually boring to me no matter how much money they spend,” Zach Augustine, a junior, told the Torch.

Neither SGI nor Haraya mentioned finances as a factor. “I’m especially upset because not only is the concert canceled,” Heard said, “but there is no replacement so it makes you wonder where are the extra funds going?”

This isn’t the first time a spring concert was canceled.

In 2014, Battle of the Voices replaced the  spring concert due to a lack of funding, according to a Torch article from March 2014.