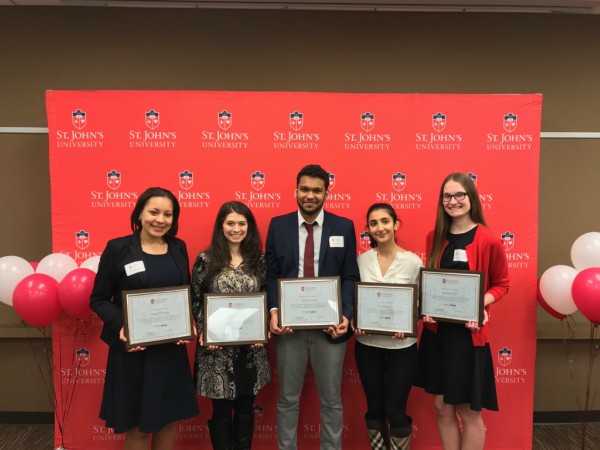 Students and faculty, along with President Conrado “Bobby” Gempesaw, gathered within the University Center for the Students Honored in Employment (SHinE) award ceremony on Thursday, April 6.

Organized by the Office of Human Resources, this year marked the third celebration of recognizing student workers.

The SHinE Award Program grew out of an idea to give supervisors a way to motivate, recognize and reward their student workers who go above and beyond at their campus jobs, according to student employment manager Mary Cascio.

“I’m very proud of them, of all of the students that were nominated, but especially the ones that were recognized today,” Cascio said. “This year, we were once again so impressed by the nominees we reviewed.”

The contributions and the accomplishments of all student nominees demonstrated a high level of work ethic and drive and made the selection committee’s job very difficult.”

As a result, the award recipients this year were not the usual amount of four as in past years; instead the honor was bestowed upon five student workers.

According to Associate Vice President in the Office of Human Resources, Nada Llewellyn, the University employs over 1,500 student workers and 65 were nominated for the award.

“One of the primary objectives of student employment is to ensure each assignment provides real world experience with transferable skills to be learned and put into practice,” Cascio said.

“These opportunities allow students a competitive advantage when seeking employment upon graduation,” she continued.

Award winners received a plaque and gift bag to commemorate their achievement; semi-finalists were also given a gift bag.

“I feel very accomplished, I feel as a student worker, that people may feel underappreciated,” senior Carmela Hopkins said.

“But at St. John’s, at least the workers I’ve come into contact with, they always know that their supervisors are always grateful for their work,” she continued. “It’s nice to be appreciated and even though you have such a small job, to know that you’re important.”

Sophomore Surendra Gobin was “extremely proud” of being an award recipient.

“I’m excited to take it home to my parents,” he said.

“I feel great because I love my supervisor and she taught me so much,” semi-finalist and junior Gina Conteh said. “I feel really honored because I feel I work hard and try to do my best for her and for our department so it’s cool to be recognized for that.”

In choosing a set of winners, Daisy Saldana, a College of Profesisonal Studies career advisor who served on the selection committee said “it was difficult” to narrow them down.

“I thought it was beautiful and I was honored that the president attended and the deans and the sector heads from each department came,” Cascio said.

“I’m happy that the students were all honored and that they had a great time,” she added.