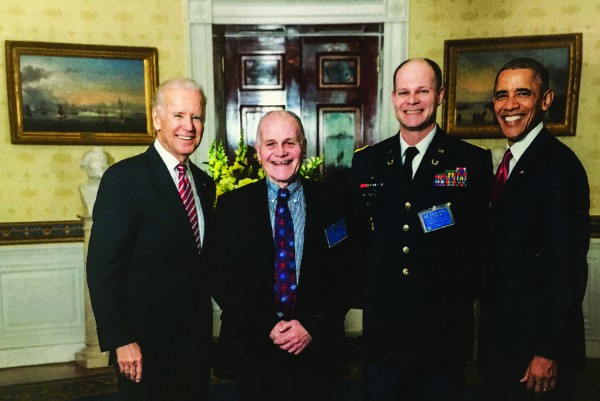 Calvin Mittman, one of St. John’s University’s longest tenured professors, died unexpectedly on April 10. He was 77.

A popular math teacher here for nearly 55 years, Mittman was known for his friendly demeanor, his interest in helping his students and a penchant for attending all types of on-campus events. He was found by a colleague unconscious in a second-floor bathroom of St. John Hall — with graded exams by his side. Police did not give a cause of death.

“He never took a day off,” said Vivian Vescovacci, department chair secretary of languages and literatures, who found Mittman. “This school is what kept him alive.”

“He had a passion for mathematics and liked to solve problems,” added Florin Catrina, associate professor of mathematics and computer science. “He was friends with everybody.”

A St. John’s spokesman said in a statement to the Torch that the university community is “deeply saddened” by Mittman’s death. “We express our sincere gratitude for Cal’s service to our students,” the university’s statement said. “He was a valued faculty member who will be missed. Our thoughts and prayers go out to Cal and his family during this difficult time.”

Vescovacci said in an interview with the Torch that she went looking for Mittman when colleagues grew worried by his absence. She found him on the ground in the bathroom. Brenda Padro, the secretary of languages and literatures, went in to help Vescovacci with CPR efforts.

A spokesperson for the New York City Police Department said only that paramedics responded to a 911 call on campus at 4:56 p.m. for an unconscious 77-year-old male.

According to Vescovacci, a lot of Mittman’s family was out of state, so the Fresh Meadows resident spent a lot of his free time at the University.

“He was a very good man, very humble. He’s going to be missed,” Vescovacci said, with tears in her eyes. “He was my newspaper boy.”

She said Mittman would go up the stairs from the math department to the language department to bring her the New York Times everyday.

“He loved our department because we are right upstairs,” Dr. Annalisa Sacca, chair of the Italian department, said. “He loved the food and would go to every event.”

said that on top of his dedication to his subject he was very active. “He would run through the math hallways,” Aprile said with a chuckle.

“He was a brilliant guy, he had a way of explaining things,” Aprile added. “He dabbled in French and he even read the German dictionary.”

Catrina, one of Mittman’s colleagues in the math department, said he was avid in helping students who were involved in the Putnam Mathematical Competition, an annual competition for undergraduate college students in the United States and Canada that gives cash prizes. “He always helped students with training and never missed a day,” Catrina said.

Dr. Charles Traina, the department chair, said Mittman always had a smile on his face and was always ready to help his students.

“I think in many ways, he mentored everybody… in the sense that, if a student came up to him for help, he would sit down and help them. He lived within walking distance of the campus, and was here all the time,” Traina said.

“He was an avid handball player,” he added. “I think years ago he was connected with the Chess Club, when there was a chess club, so there’s a whole lot of things he was involved in.”

“He was well-known not just in the math department, but throughout the University. He was the kind of guy who would attend almost any event. If there was an activity that was related to something else, he would go, because he was very well-rounded. He had an interest in almost everything. I know that he had a great interest in languages. He also liked to eat, if there was an event with food, he was there. He would be the first to admit it,” Traina said, to which Vescovacci and Sacca also attested.

According to the University’s website, his research interests include combinatorics, number theory, knots and links and discrete operators.

“I remember he loved palindromes and was a fan of history,” alum Romario Ferreira, a psychology student, said in an email. “He was also one of the sharpest professors I ever had. He could solve equations and problems in his head in miraculous fashion. He was a brilliant man and held his students to a very high standard and was funny in his own way with his spur of the moment jokes. Condolences to the family.”

Sophomore Spanish major Sieta Leon added, “He was a very good person and was really passionate about the topics he taught us in class.”

“Although I did not have a chance to get to know him on a personal level, I could tell he was an honorable man, passionate about teaching his students and sharing his passion with the wide variety of students who sat in his class,” Cammi Roberts, a junior in the School of Education, said.

Condolences can be sent to Sinai Chapels at 162-05 Horace Harding Expressway in Fresh Meadows, according to legacy.com.