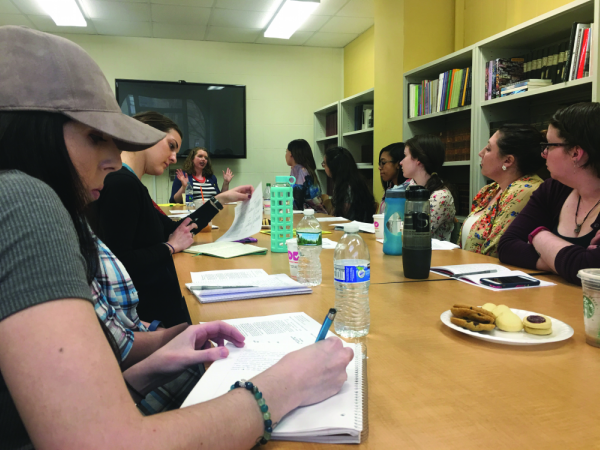 The evening began with Hershinow reading a recent article she had written explains her take on the depth, development and socialization of the 18th century novel, “Clarissa,” by Samuel Richardson.

Hershinow explains how she views the novel’s leading lady, Clarissa, as the unconventional character during that time period.

While the average woman during that time was typically written as a housewife whose only purpose was to get married, clean and bear children, Clarissa went against those ideals and tried to create a life for herself.

“It was really amazing. She was so relatable and funny,” second year masters student, Kailyn Giaccone said. “She gave the speech in a way that makes you want to pursue this idea more and read it again.”

A big topic that the Hershinow and the students who attended talked about was the introduction of data keeping during that time.

One of the standout characteristics of the novel is the well-kept daily schedule in a ledger about Clarissa.

Hershinow elaborated on the idea that this influenced the world around them during that time period and brought the idea of data collection and daily planning. Hershinow went as far as explaining that Benjamin Franklin was even inspired by the format shown in “Clarissa” for the layout of one of his books, and this layout has inspired our modern day trend of bullet-journaling.

The article reading was then followed by a question and answer session where Hershinow elaborated on the strong stance of gender roles that “Clarissa” had broken, the comparison of bullet-journals to Clarissa’s ledger. Hershinow also explained her dissatisfaction with the self-tracking method portrayed in the novel.

“This speech kind of gave us a different spin on how we are reading the novel,” second year masters student, Nicolina Astorina said, “It makes me go back and think about things that I have kind of missed the first time, so that was really interesting.”

She specializes in eighteenth-century British literature, the history and theory of the novel, experimental literature and literary theory.

She is currently working on her book, “Born Yesterday: Inexperience and the Early Novel,” where she focuses on eighteenth-century obsession with naiveté. Hershinow dives into the literary form of older novels and researches the change in writing and how literature has evolved into what it is today.