12th Relay for Life: Most impactful yet 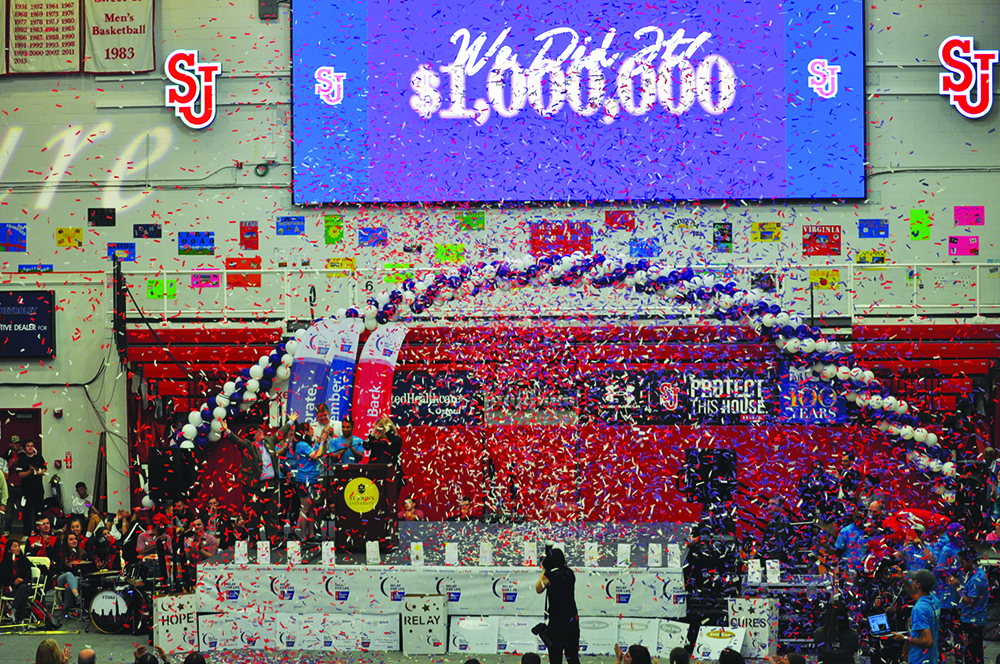 It was announced at the 12th annual Relay for Life that the University has raised over $1 million for American Cancer Society since 2005.

At this year’s 12th annual Relay for Life, which was held last Friday night in Carnesecca Arena, it was announced that the University has raised over $1 million for the American Cancer Society since it began participating in 2005.

This year’s Relay drew the event’s largest attendance on record; about 1,962 people consisting of students, faculty, alumni and families came together to rally in support of and recognition of those who have been affected by cancer.

One hundred sixteen St. John’s organizations attended the America-themed event, including various Greek life groups that stayed for its duration, which started at 6 p.m. Friday and ended at 6 a.m. Sunday, raising a total of  $137,214.

Alex Kaiser, the chair of the Relay for Life committee, said she was informed that St. John’s reached its $1 million mark at 4:08 p.m. on Thursday, April 20.

During the announcement of the milestone, Dr. Kathryn Hutchinson, the vice president of Student Affairs said, “Relay at St. John’s has become a part of our culture.”

The announcement at Relay came with confetti cannons and joyous applause. President Conrado “Bobby” Gempesaw, his wife Clavel, and Dr. Robert Mangione, the provost and vice president for Academic Affairs were among those in attendance.

Julia Mackey, SGI senior senator and the SGI liaison for Relay for Life said reaching the one-million mark has been “monumental,” and that the committee has been striding for it for a long time.

After the announcement, the 2017 committee members honored Mary Pelkowski, associate dean for Student Engagement, who has been in charge of Relay for Life for the past six years.

“I was in my office watching and refreshing the internet every few minutes until it hit the $100,000 mark. I was with student leaders of this year’s core committee, so it was so special to share that moment with them,” Pelkowski said.

William Pugh, co-chair of Relay for Life and the vice president-elect of SGI said, “It’s been nice to see it progress and see how [we’ve] constantly [raised] more money since my freshman year and how we’ve grown.”

Pugh also stated that this was the biggest committee for Relay for Life that that they’ve ever had, with 54 committee members.

Mackey added that after beating the goal they set for themselves for last year’s relay, the team was motivated to reach the one-million mark. She said last year “definitely acted as a motivator” for both the Relay for Life Committee and SGI.

“This by far was the best and most committed committee that I had the opportunity to work with,” Pelkowski said. “We have been working toward this goal since mid-September so it was an amazing moment on Friday with the confetti and in sharing it with leaders who have worked so hard and are so invested in one day finding a cure.”

Performances during the all-night event kept people on their feet. A performance by Vocal Synergy, an acapella group from Wagner College on Staten Island, was a crowd favorite.

“It’s been a very nice year overall,” Pugh said. “A lot of emotions knowing that we finally reached the mark and knowing that we’ve been able to contribute to cancer research and providing housing to cancer patients at the NYC Hope Lodge.”

Sam Sheehy, a freshman, said she was inspired to participate at Relay for Life for the first time.

“My grandmother passed away before I was born and my mom and I always walked in breast cancer marches for her, but since going to college, I don’t live close to home anymore,” Sheehy said. “So there was no way to commemorate her loss and I thought this was a good way to do it without her this year.”

Kaiser added that the hair from the hair-cutting ceremony is being donated to a different group from previous years working with Pantene; it will be going to one based in Long Island, which makes wigs for children with cancer.

“Cancer doesn’t reserve itself from anyone, I hate to say it, but it’s ruthless,” Mackey said. “I think the fact that this event calls for advocacy for all different kinds of cancer not just breast cancer, not just colon cancer, but all types and that’s a really big deal.”