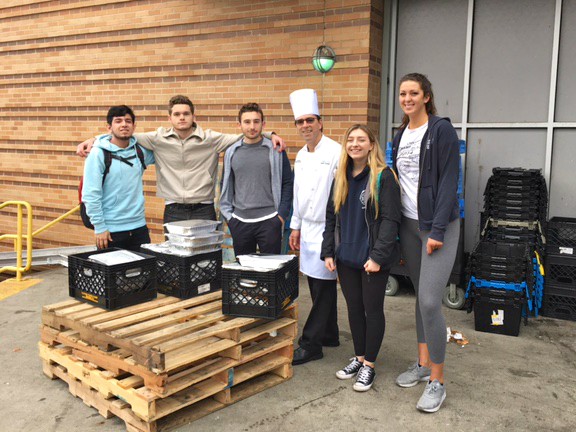 Two students have recently initiated the St. John’s chapter of the Food Recovery Network (FRN). With the help of fellow student volunteers, St. Vincent de Paul’s Society and Dining Services, the University is donating leftover food to the Church of God in Christ Jesus of the Apostles’ Faith, Inc. food pantry every week.

The FRN is a national student movement that aims to end food waste and hunger in the U.S., which was created by students at the University of Maryland in 2011. It has since then accumulated more than 200 university chapters, according to their official website.

Junior Christopher George and sophomore Seid Mulic, both coincidentally reached out to the FRN in order to establish a chapter at SJU. The FRN then connected them to work together.

George was not able to meet with the Torch, but Mulic offered his insight.

“We met and planned on how to go about getting the chapter established, and after many weeks of planning and meeting with administrators, we were able to get it going,” Mulic said. “Chris played a big role in compiling a list of eligible places to donate food and eventually confirming with the church we know deliver to.”

George, Mulic and sophomore Ibrahim Mulic, worked closely with Regional Executive Chef, Kelly Heefner, to take the frozen food to the Church of God in Christ Jesus of the Apostles’ Faith, Inc. which is just two miles from the University.

“We really owe Chef Kelly a lot of credit for being resourceful and down to earth, and trying his best to help us out,” Mulic said. “He is also passionate about the cause and he really was the one who made it work for us.”

Every Wednesday morning since February, they take dozens of pounds of untouched food from each dining hall on campus to the food pantry. Thomas Goldsmith, the director of the Office of Sustainability, is now driving them there as part of his departments goal to “Conserve to Serve.”

According to Sister Patricia Evanick, a Campus Minister Vincentian Svc, the chapter is still developing, as they have to be mindful of the legalities that come with donating food.

“We want to advocate for it and get other departments involved,” Sr. Evanick said.

Mulic said that they aim to, “get more and more volunteers, make the process more streamlined and efficient and to engage the workers of the dining halls to make sure no leftover food goes to waste.”