Turn Off The Violence Week 2017 commences 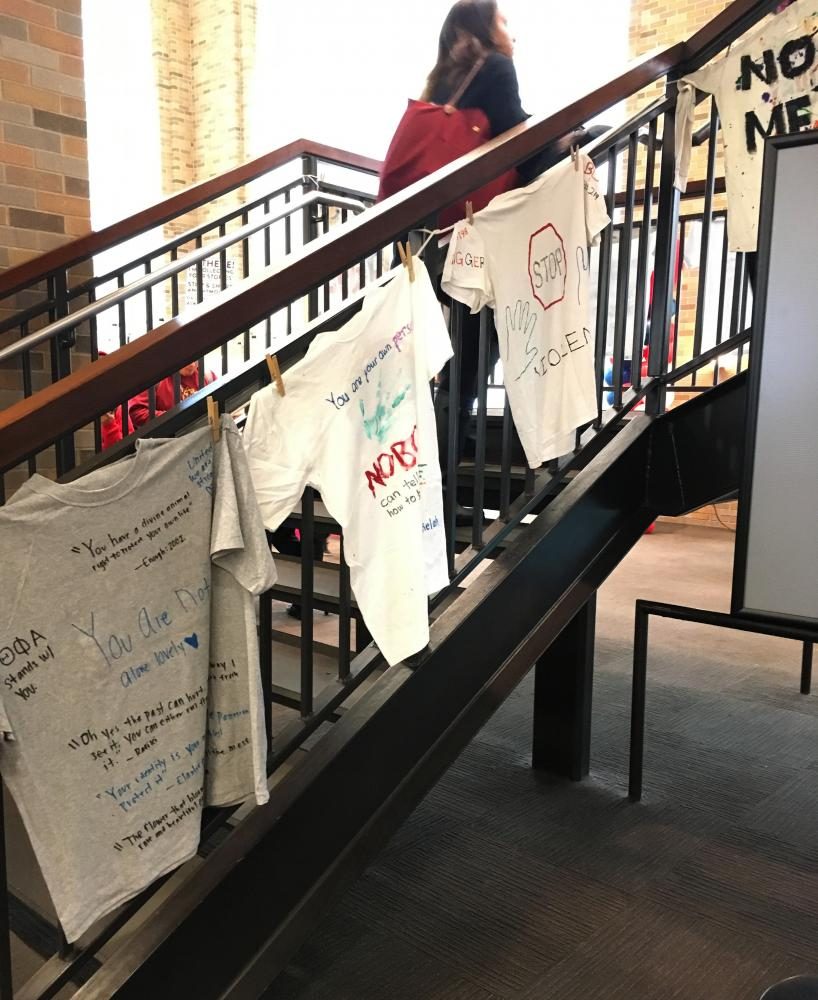 Students decorated t-shirts with messages of anti-violence and in support of victims of rape.

The kickoff event for the ninth annual Turn Off The Violence Week at St. John’s featured keynote speakers Angela Esquivel and Teri Rosenberg as they discussed “The Scars Behind the Screens” and how social media plays a role in sexual violence.

Rosenberg is the co-founder and chief operations officer of the As One Project and is the communications and development director of the New York City Alliance Against Sexual Assault. She identifies as a secondary survivor through personal friendships.

The two speakers first defined the terms “secondary survivor,” someone close to a survivor who may experience the same feelings, thoughts and reactions as a the primary survivor, “sexual assault,” sexual contact behavior without consent, and “consent,” an active process involving voluntary and enthusiastic agreement to participate in sexual activity. They shared that every two minutes someone is sexually assaulted.

One in three women and one in six men will be sexually assaulted in their lifetime, with 20-25 percent of those women being in college. LGBTQ people are also at higher risk to be assaulted.

Some myths about sexual assault that were proven false include the phrase “stranger danger.” They shared that 85 percent of survivors actually know the person who assaulted them.

Another myth was that most reports filed are false, when in actuality two to eight percent end up being falsely reported.

The main focus of the event was to discuss how to support a survivor, and their three tips were to first follow your friend’s lead, to be aware of your actions just as much as your words and to take care of yourself.

It is important to look out for reactions following the assault which may include depression, flashbacks, PTSD, self harm, substance abuse, eating and sleeping disorders or nothing at all.

The brain’s natural response to traumatic experiences is fight, flight and freeze. Fight is caused by irritation, and flight by worry and anxiety.

The forgotten response, according to Esquivel and Rosenberg is freeze, which may look like emotional numbness and complete shutdown.

The speakers stressed how to speak to survivors and to not place responsibility on them with questions like, “Are you sure?” and “What were you wearing?” Saying phrases like, “I know how you feel” and “Everything will be ok” are not helpful to the survivor.

Instead, they advised to say, “I believe you” and “I’m here to listen,” or even nothing.

“Technology is not the solution to ending sexual violence, your connection to people and resources can be,” Esquivel said. “It’s going to be us on a human and interpersonal level.”

Event volunteer and sophomore, Sameera Ramen, said, “I volunteer because I think this discussion is important and there needs to be more awareness.”

Some thoughts the speakers wanted students to think about when they left were, “What are some pros and cons of social media when talking about sexual assault?” and “How can we better support our friends?”