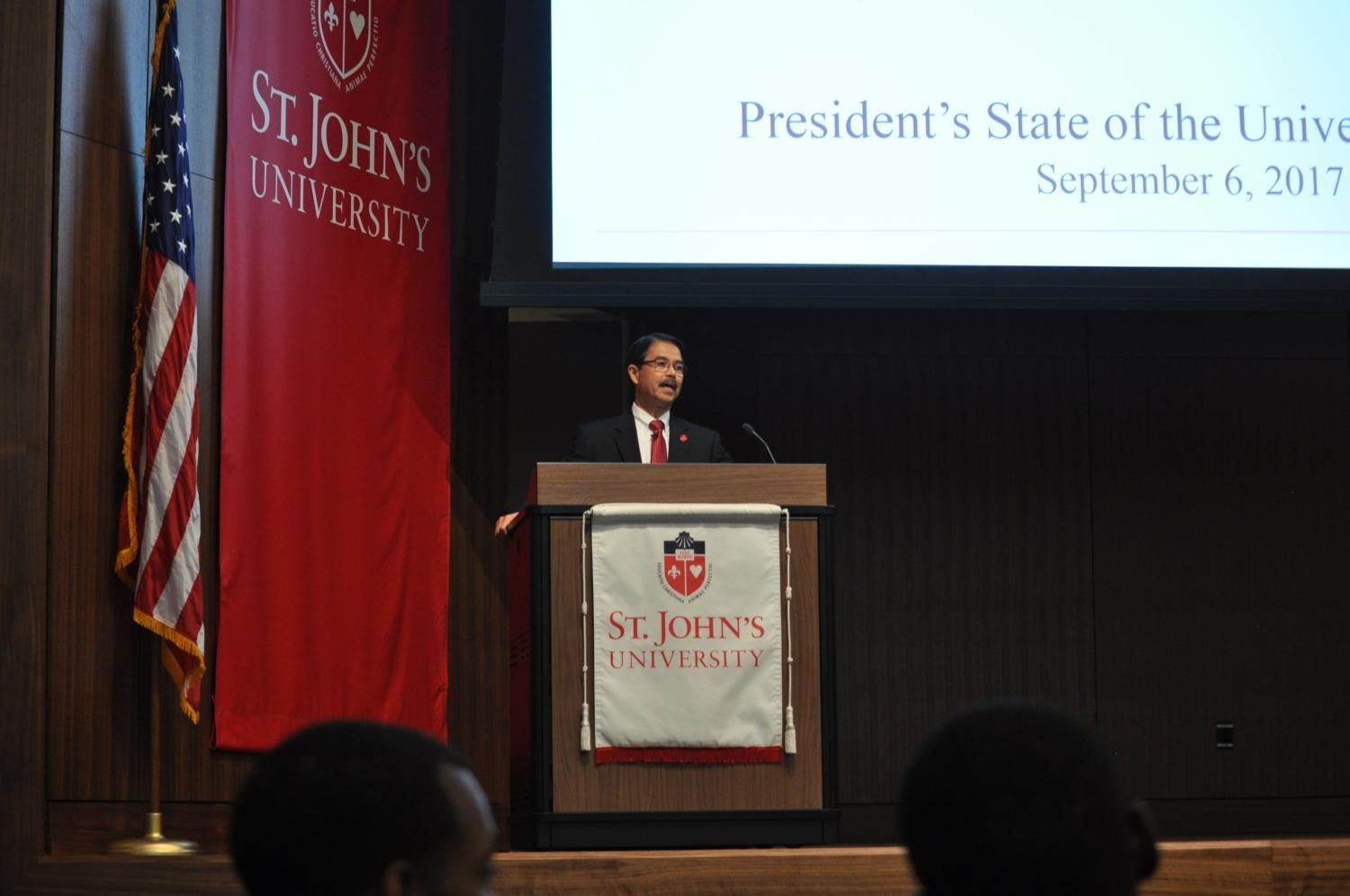 St. John’s University President Conrado “Bobby” Gempesaw delivered his third annual State of the University Address on Sept. 6 to faculty, students and alumni, highlighting key information from the past year.

The theme of the address, “Accelerating the Momentum for Change” related to the University’s past, present and future advances and plans for a better St. John’s.
The address took place in the newly renovated Marillac Auditorium and was livestreamed for all St. John’s campuses to view.

Junior Kayla Knight sang “America the Beautiful” to open the event and was followed by Student Government Inc. President Frank Obermeyer who gave an introduction for Gempesaw.

“We have established momentum during the last three years,” Gempesaw said. “Because of your hard work and commitment to our strategic priorities.”

Gempesaw kicked off his statistics with undergraduate enrollment which in six years dropped from 11,840 in 2011 to 11,731 in 2017. However, enrollment for first year students rose from 2,763 in 2011 to 2,950 in 2017. Nearly one third of this year’s incoming freshman, Gempesaw said, came from Catholic high schools and was also the largest entering first-year class of any Catholic college or university in the nation. An average SAT score of 1150, average ACT score of 25 and average GPA of 3.9 makes this class, as he said, an “academically gifted one.”

Gempesaw was particularly proud to announce that $237 million in unrestricted institutional financial aid was awarded to 89 percent of all students.

“St. John’s has had a remarkable record of providing access to higher education for young women and men who might not otherwise be able to afford college,” he said. “However, it is not enough that we provide student access—we must also focus on student success.”

Career placement was also high as 94.3 percent of the class of 2016 were employed or enrolled for advanced study within six months of graduation.

One of the most visible changes the St. John’s community can see are renovations. According to Gempesaw, there have been up to 70 renovations made on campus, the largest of the projects for the Tobin College of Business also known as Bent Hall. Enhancements to the building include the Lesly & William Collins Business Analytics Lab, the Paul & Carol Evanson Career Center and the Valerie & Gerard Sodano Dean’s Suite.

St. Augustine Hall now has a Homeland Security Lab, the first of its kind in the whole Northeast, a Cyber Security Lab, a Multi-Purpose Room, a Computer Science Lab, an Innovation Lab that is a hands-on design and test space where students learn to develop new products and an IDEA Lab, a creative space for students to produce digital and print media products.

Gifts to the university totaled in at $22 million in 2017 from 11,786 donors, a large jump from $16 million in 2013. St. John’s also aims to share knowledge with New York Presbyterian Queens, Suffolk and Queensboro Colleges.

Gempesaw ended his address with noting his top priorities for the new school year which includes enrollment and student success, academic revenue diversification and a focus in demographics, social, economic and diversity through advising and mentoring, inclusion in curriculum and recruitment. He hope to improve the learning environment, operate budgets and capital expenditures and build a sustainable relationship among campuses and locations. Academic, corporation, not-for-profit and auxiliary partnerships he seeks in the future as well.

“I am sincerely grateful to all of you for your efforts to improve and strengthen our University,” he said. “Let us continue working together so we can build a much stronger foundation for future St. John’s students, employees, alumni, and friends in our community.”