New installation to become a symbol of more than 140 year-long tradition. 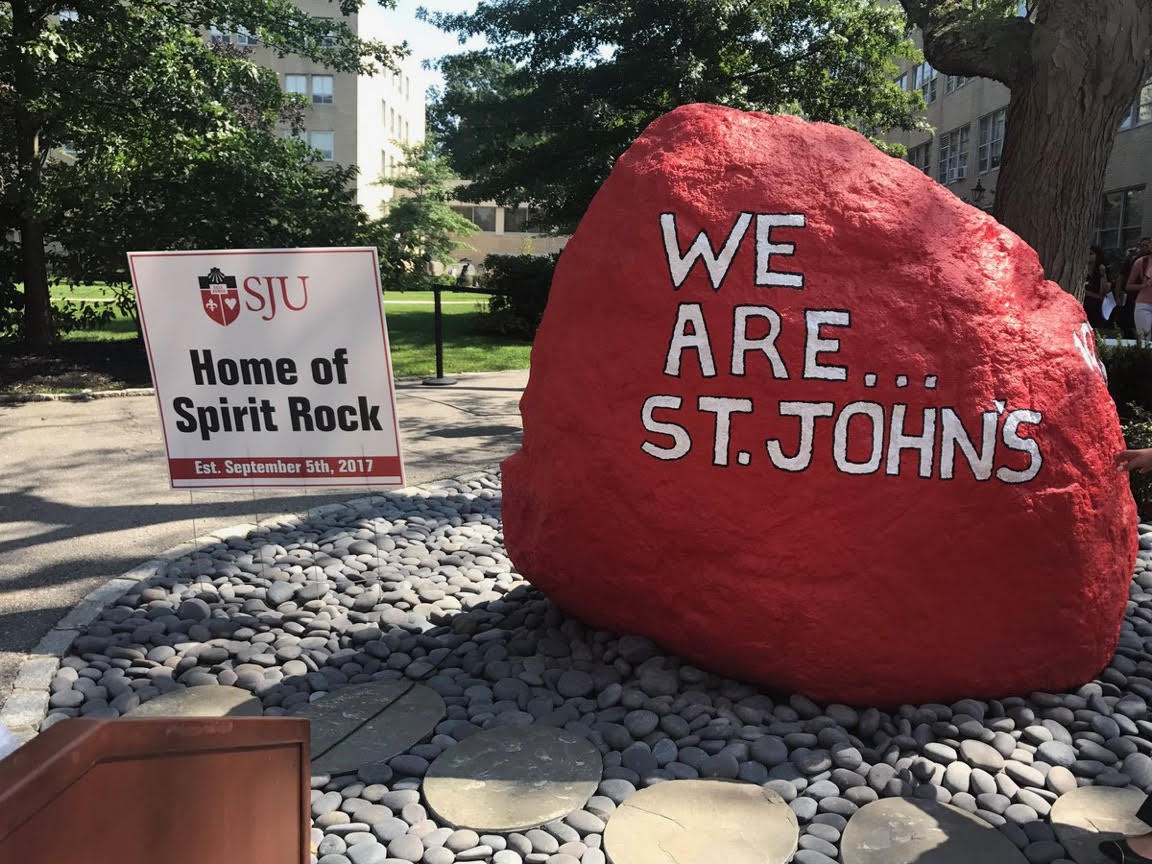 The University unveiled the Spirit Rock in September.

The University’s new “Spirit Rock” was unveiled last Tuesday, Sept. 5 on the Sullivan Hall Roadway, drawing a crowd that included dozens of students, student athletes and faculty.
The event began with a performance by the University’s Pep Band, and its featured speakers included SGI President Frank Obermeyer, Graduate Assistant for Student Engagement Ridge McKnight, Director of Athletics Anton Goff and Vice President for the Division of Student Affairs Kathryn Hutchinson.

The Spirit Rock, which is painted red and emblazoned with the words “We are… St. John’s,” can now be found in front of Sullivan Hall.

Obermeyer thanked the University’s student athletes, referring to them as “a great point of pride” at St. John’s, as well as all those involved in making the Spirit Rock a reality.

“A few weeks ago, that rock was sitting behind our campus garden. And now, it’s sitting here in this beautiful place,” Obermeyer said. He went on to call the Spirit Rock a symbol of St. John’s 147 year-long tradition.

Rev. Richard Rock, who delivered the blessing of the rock, referred to it as “a symbol of courage and strength.”

“We ask that this Spirit Rock remind us of your blessings on all of our student athletes and fans, as it becomes part of the university landscape that is built on the tradition of some of the most amazing leaders,” Rock said during the blessing.

Anton Goff then took to the podium to expound on the Spirit Rock’s meaning for the University community, which he said he hopes will be an inspirational one that encourages a sense of camaraderie on campus.

“Whether you’re a student athlete, regular student, whether you’re an alum—whatever you’re trying to do, hopefully this rock will inspire you,” Goff said, addressing the crowd.

Hutchinson, who spoke last, emphasized that the rock is also representative of St. John’s Vincentian tradition of helping others, and invited students to come forward and tap the rock—a practice which she said will solidify itself as a University-wide tradition.

“As you tap the rock, may you gain strength, may you feel the blessings that come with being a member of the St. John’s family,” Hutchinson said, and invited all student athletes present to line up to tap the Spirit Rock.

Maia Cabrera, a freshman and women’s soccer team player, expressed that while she has never seen anything like St. John’s new Spirit Rock, she believes it will be a positive addition to the campus.

“I think it can really give students support, and inspire them to strive for excellence,” Cabrera said.

Emily Purtell, also a freshman and women’s soccer team player, said, “I think everyone needs something to fall back on, to give them hope. That’s what the Spirit Rock is.”