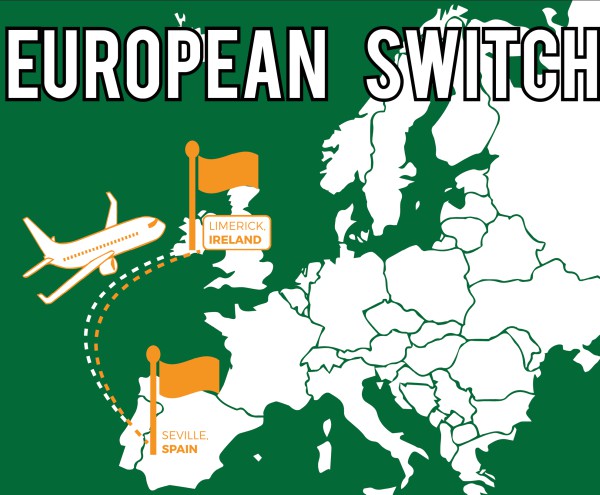 Instead of Seville, Spain, students participating in the Discover the World study abroad program at St. John’s will be visiting a new destination this spring: Limerick, Ireland.

The Office of Global Studies says the change is in response to complications regarding obtaining visas for multi-site programs.

“The configuration for Discover the World: Europe (DTW) will adapt in the spring 2018 semester in response to recent changes in the way consulates in New York City representing Italy, France and Spain issue visas for multi-site programs,” Matthew G. Pucciarelli, associate provost for the Office of Global Programs, said in an emailed statement to the Torch.

Pucciarelli told the Torch that Ireland is not subject to the new restrictions that Spain is, hence the change in location.
The policy in question is related to Schengen visas, according to St. John’s Office of Media Relations. Schengen visas can be used for travel in 26 countries throughout Europe known as the “Schengen Area,” including Italy, France, Spain, Germany and Switzerland.

Over a 180-day span, visitors traveling on a Schengen visa can only spend 90 days in Schengen-area countries, according to the Schengen visa information site.

Traditionally, Discover the World gives students the opportunity to spend five weeks of study at three different locations: Seville, Spain, Rome, Italy, and Paris, France, for a total of 15 weeks.

Now, students will study at Mary Immaculate College (MIC) in Ireland, rather than the campus in Spain.

“All the hallmarks of the Discover the World: Europe program will be maintained, with the added advantages of a close affiliation with a local university in an English-speaking country,” University Provost Robert Mangione, Ed.D, said last week in an university-wide internal communication announcing the change.

“St. John’s University’s Discover the World: Europe program and our new strategic partnership with Mary Immaculate College in Limerick, Ireland will open many new exciting opportunities for students of both institutions to live and learn together,” he said.

While University leadership expressed optimism regarding the location change, the decision has been met with a mixed response from both students who plan to go abroad in the future and students who are already participating in the program.

St. Cyr told the Torch that she feels lucky to have made it to Seville before the change went into place, adding that she’s spoken to students from another university in the Boston area studying in Seville for the semester who also referenced visa restrictions. According to her, the students said their program was planned for 89 days to meet the 90-day rule.

“So I think St. John’s was looking for a way to stop having this problem,” she said, “But I think Spain should be fought for. It is so so worth it.”

St. John’s has campuses in Rome and Paris, and those spots remain part of the program.

According to the “Apply for a Visa” page on SJU’s website, U.S. citizens studying abroad through the Discover the World program do not need to obtain visas as long as the students haven’t traveled in the regions covered by the Schengen territory for 90 days before the semester abroad begins.

However, most students who are not U.S. citizens need to obtain both French and Irish visas to study abroad through the DTW program.

Sophomore Miranda Escobar, who’s going abroad in the spring, said she’s disappointed by the change because she’s wanted to study abroad in Spain for years.

“It was really annoying to find out so last minute and realize it wasn’t even an option for me anymore,” she told the Torch. Escobar believes the school should have given students more advanced warning so that they could have made arrangements to study abroad in the fall while Spain was still an option.

Nevertheless, she said she’s still excited to go to Ireland, and will be visiting family in Madrid when she has time. And she isn’t alone. Several students who spoke to the Torch said they’re happy about the change.

“I honestly was so excited about the change I was shaking when I found out,” said sophomore Meghan Ames. She’s going abroad next semester, and told the Torch that she feels “blessed” to have the opportunity, adding that studying in Ireland has been a dream of hers.

In a news release regarding the change, SJU noted that Limerick is the third-largest city in Ireland. Students participating in the program will live at a hotel in the center of the city that’s about a 15 to 20-minute walk to the campus. It’s also the first time the DTW program has collaborated with another Catholic college.

Sophomore Brandon Farrell, who’s also going abroad next semester, said he was looking forward to going to Spain, “but I think Ireland is going to be a nice change of pace because it seems more self contained than more global cities like Rome and Paris.”

He added that his family is of Irish descent, so the trip feels “essential.”

“I was excited for Seville, and now I’m even more excited for Ireland,” he said, adding that he believes “the core of the program remains intact and it’s going to be an amazing experience regardless.”

Still, even those who are excited about the change said they understand why some might be upset. “I think it’s fair for them to feel misled,” Farrell said. “They were advertised something other than what they’re getting.”

With the application deadline rapidly approaching, St. Cyr said she’s received messages from people planning to go abroad in the spring who she said are now “contemplating if they still want to do the program.” The priority application deadline for spring 2018 is Oct. 14, according to the St. John’s website.

For students who are disappointed with the change, Ames said she hopes they can be open-minded.

“I hope,” she said, “people who are disappointed about the change go into this with an open mind and see all of the plus sides.”