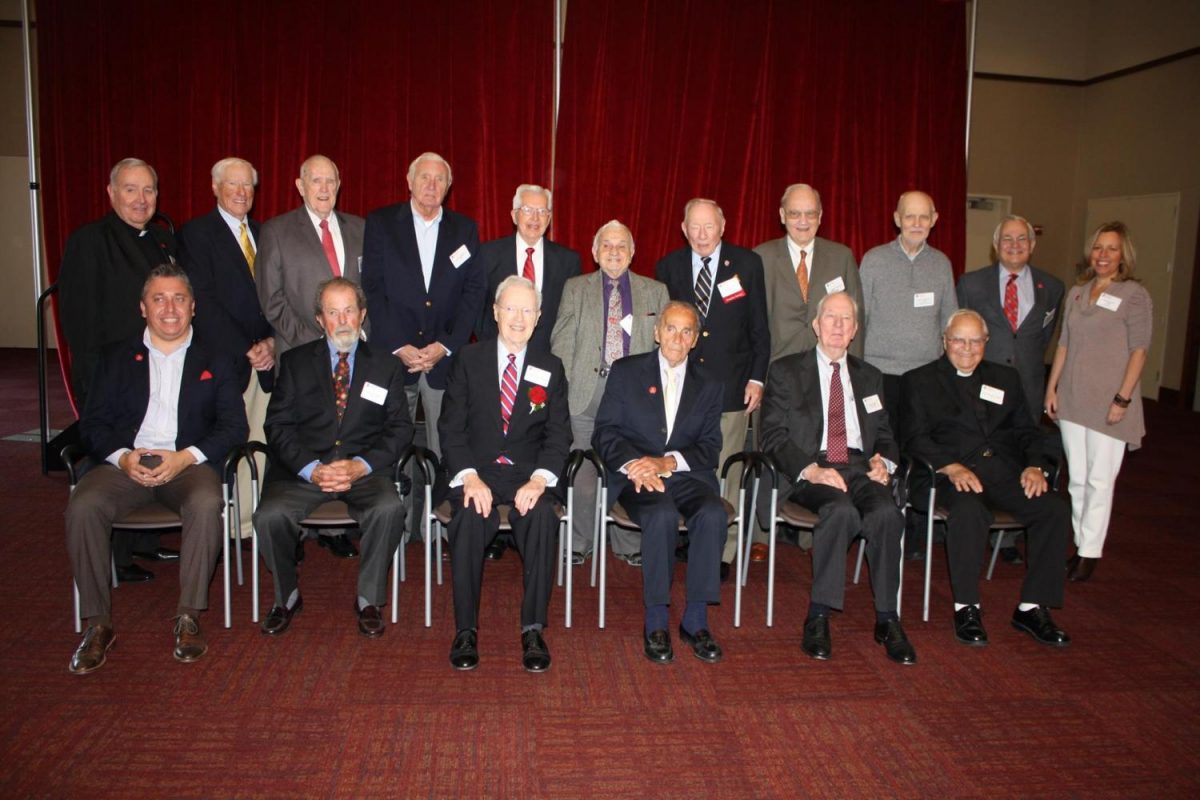 The 60th Annual Lewis Avenue Reunion was held this past Sunday, Oct. 1 with a morning mass in St. Thomas Moore Church and a brunch reception in the D’Angelo Center Ballroom. Over 30 alumni from the St. John’s University Lewis Avenue location in Brooklyn attended this year’s reunion. Some alumni include Patrick Vecchio (’52C), Lou Carnesecca (’50C), John Mulvehill (’55C) and Achilles Schiano (‘55C).

The reunion began with a morning mass at St. Thomas Moore Church that included a moment of silence and a memorial for the alumni of Lewis Avenue who have passed away in the last year.

After the mass, the Lewis Avenue Alumni were welcomed to a trolley ride around the campus to give the guests a mini-tour of the campus.

The trolley ride began at the church and ended in front of the D’Angelo Center where the alumni were brought into the ballroom for a brunch reception, live music and the presentation of the Legacy Award.

As the reception began tables of guests and alumni mingled throughout the ballroom eating and talking.

Some of the alumni mingling together were Lou Carnesecca and Patrick Vecchio. The two were all smiles and laughs as they discussed their times at St. John’s and the memories they shared together with other alumni around the table.

Vecchio is a retired NYPD Detective Sergeant who is entering his 40th year in politics.

“I am currently the town supervisor of Smithtown,” he said.

Vecchio was one of two alumni to receive the Legacy Award at the reunion.

Lou Carnesecca was constantly smiling when discussing his time at St. John’s and described what he missed most about the university.

“The people, great people, and the warmth and I see that it’s there. That was the most distinguishing factor, we never forgot who we were,” Carnesecca said.

Vecchio also shared how St. John’s felt like home, “The building was like your home, it wasn’t a large edifice, and it was in a neighborhood, not a sprawling campus.”

After a crowd cheering performance by the New York Nightingales, who performed covers of classic songs like “Boogie Woogie Bugle Boy” as well as “Favorite Things” from “The Sound of Music,” the presentation of the Legacy Award was given to the two honorees. Patrick Vecchio and the Honorable Diarmuid O’Scannlain were presented with the awards for all their accomplishments and commitment to the University.

At the close of the awards ceremony, the alumni were offered cake and a chance to read yearbooks from their graduating class along with archives online.

Near the back of the room, Achilles Schiano and John Mulvehill were laughing and discussing their time at St. John’s as well.

Mulvehill and Schiano both graduated from St. John’s in 1955, the last graduating class at the Lewis Avenue location.

On the topic of what was most missed from being at St. John’s the pair had similar things to say.

“I just loved going to school here. It’s a lovely place, and I loved the people,“ Mulvehill said.

An alumni of the Torch student newspaper, Schiano discussed his time on the newspaper. “I miss my youth, the opportunity to learn every day… I was very active on the Torch, really gung-ho,” Schiano said.

“I started a column called ‘Backward Glance,’ where I looked up old yearbooks and I would just gleam different things that happened,” he said.

At the close of the reunion, many of the alumni, including Mulvehill, shared similar thoughts on their times at Lewis Avenue.

“I miss the people,” Mulvehill said.

The 60th reunion will be the last separate event held with future Lewis Avenue reunions to be included with the Grand Alumni weekend in June.