Silencing the Past: Volume of the Present 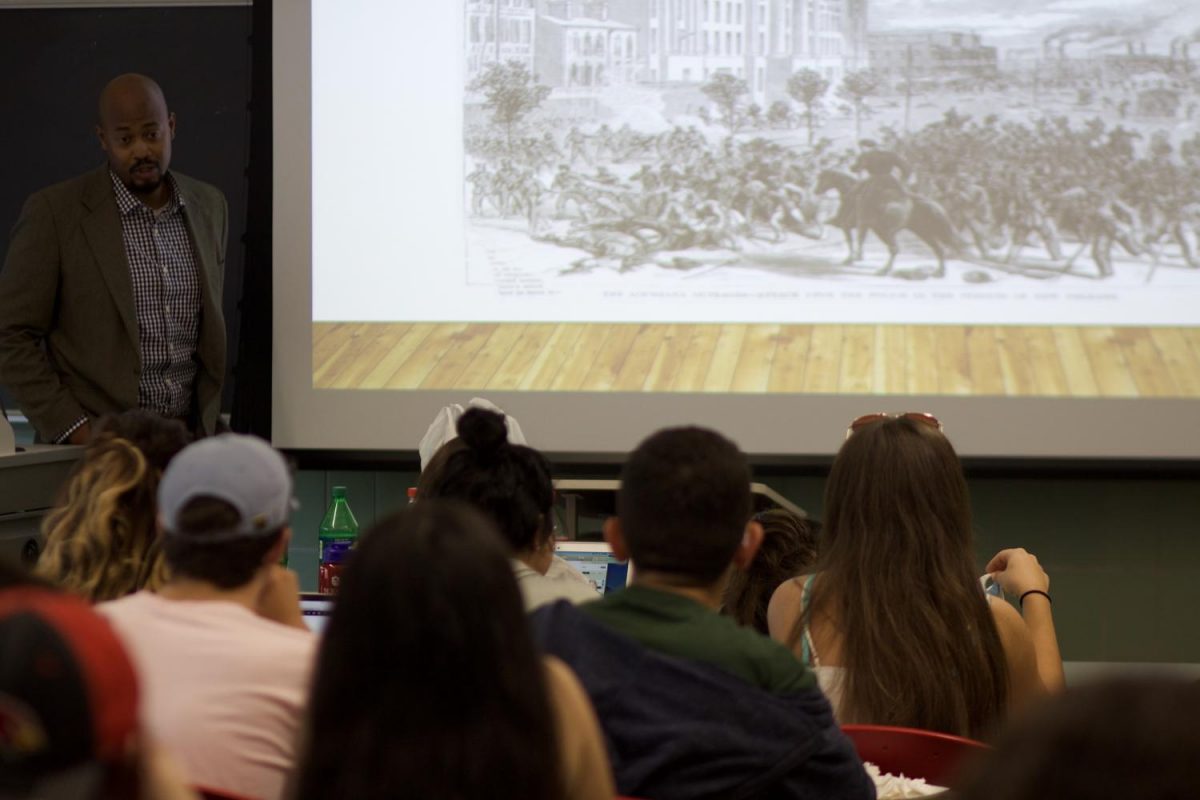 Professors Bland and Vapnek allowed students to speak up during the discussion.

Last Thursday’s “Silencing the Past: A Discussion on Confederate Statues, Race, and Historical Memory” event, which took place in St. John’s Hall, was centered on U.S. history in light of the recent events in Charlottesville.

The discussion, held by Assistant Professor Robert Bland and Professor Lara Vapnek of the History department was initially supposed to be held in Room 247 in St. John Hall; however, an overwhelming amount of student attendees quickly filled the room and the location of the discussion was moved to a much larger classroom.

Even after the relocation, every seat in the classroom was occupied and some individuals had to line up along the back wall in order to participate in the discussion.

The discussion, which lasted approximately one hour and 15 minutes, consisted of presentations created by the professors, and intermittent question and answer sessions with the audience.

Rather than the forum being a direct conversation between a student and professor, students were encouraged to interact with one another and to further develop each other’s opinions.

The topic of conversation was generated by the question, “[Why] are the monuments an issue now?” This question opened the floor to discussion; some students noted that since the issue is now gaining recognition, “it is an issue that cannot be silenced,” and thus it speaks volumes in the present.

“It made you think a lot more… In the media we’re not provided with everything that we’re provided here,” first-year student Jillian Spreckels said.

Many students said they did not feel the need to censor themselves or call themselves victims of censorship.

The circulation of propaganda as well as censorship were prominent issues throughout the Civil War era, and this was also addressed during the discussion.

“I was born and raised [for the most part] in Virginia, which was a border state during this time,” freshman Abby Turese said. “It was cool to hear other people’s opinions about [the subject].”

Students raised other points, such as relocation and potential demolition of the statues and how conversation should be generated outside of the classroom.

The students’ strong feelings about the subject matter was obvious. Many vocalized that some course of action needs to be taken to rectify the issues at hand.

“I’m from Virginia— Charlottesville is on my mind. I thought it would be a good idea to have this discussion on campus,” Bland said.

Although the discussion was held to serve more of an educational purpose, Bland stated that he would not be averse to students taking action.

The students in attendance agreed that before any action is performed, there needs to be a forum to discuss the subject and this event proved that the conversation has already begun here at St. John’s.